Interest rates in 2022 have jumped due to the Federal Reserve’s monetary policy tightening, with the government’s cost of borrowing money for five years increasing nearly three percent since the start of the year. Simple math would seem to indicate there is a potential problem brewing for the U.S.

Despite appearances, we see little reason for investor concern at this stage, and we do not see rising rates as likely to impose a meaningful constraint on investor appetite for U.S. government debt or on politicians’ appetites for unfunded tax cuts and incremental spending.

Even though yields on newly issued debt are higher, the U.S. government sold large amounts of longer maturity debt in 2020–2021 to pay for pandemic relief and to lock in low interest rates. As a result, the weighted average coupon on Treasury obligations has only gone to two percent as of last month from 1.8 percent at its all-time low in February 2022. Borrowing costs will almost inevitably rise as maturing obligations are refinanced, but we think the government is in generally good shape as the process begins. 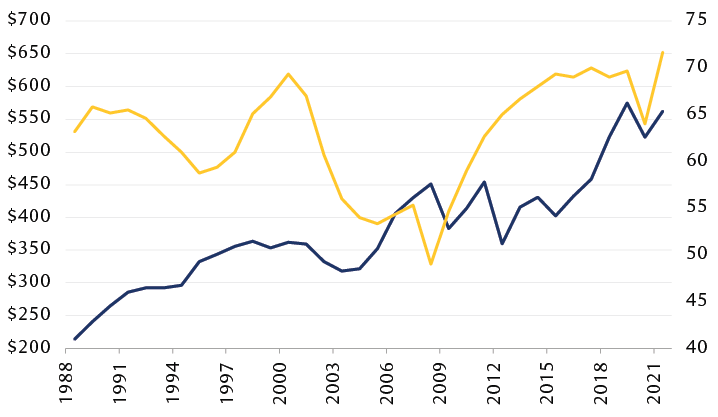 Line chart showing the annual interest expense for the U.S. federal government from 1988 to 2021 and the average remaining months to maturity for Treasury debt. The interest expense increased fairly steadily in that time from $200 to nearly $600 billion while maturity fluctuated before reaching its current level of 72 months, the highest in the time frame shown.

Of course, even though the debt burden change looks small in the aggregate, when dealing with dollar amounts in the trillions, even small changes matter. The 0.2 percent average coupon increase since February, for instance, translates into nearly $50 billion in additional required spending. And with approximately 15 percent of outstanding debt due to mature in the next 12 months, that cost increase is poised to grow. For investors thinking about the impact of rising debt service on their household budgets, these numbers may seem alarming.

But unlike households, government budgeting is not constrained to any given income amount. The U.S. Congress can spend as much as it likes, provided it has sufficient tax revenues or bond market funding. Borrowing money is more expensive than last year, but there has been no market pushback on government issuance that we can see. And to the extent that government spending is constrained by higher interest rates, it would be a welcome advance in the Fed’s anti-inflation campaign.

Investors should also consider that higher interest rates and rising inflation have positive impacts on the government’s finances. The inflation-adjusted debt burden, for instance, has shrunk by almost $80 billion since January 2021, as rising prices have eroded the value of U.S. Treasury obligations at a faster pace than the government sold additional debt. In a similar vein, the rate-hike-induced decline in government bond prices has reduced the value of outstanding government liabilities.

A long wait for “I told you so”

The simple truth is that U.S. national debt will almost certainly increase for the foreseeable future. Even at current interest rates, debt-fueled tax cuts and spending increases are popular with voters and politicians across the political spectrum, despite occasional rhetoric to the contrary. And why not? With foreign investors scooping up nearly a third of U.S. debt, as a nation the U.S. essentially exchanges slips of paper promising future payment for valuable goods and services today. Long-term rates of four percent are apparently insufficiently ominous compared to the temptations of current consumption.

This leads to longer-term outlooks that are frankly troubling. The baseline projection, for instance, from the Congressional Budget Office (CBO), a non-partisan economic forecasting agency, has nearly a third of government revenue dedicated to debt service by 2052 as accumulated government borrowing hits 185 percent of the economy. If future rates were to be only 1.8 percent higher than the baseline forecast, the CBO sees debt payments consuming nearly 80 percent of the government’s revenue with a total government debt burden over 2.3x the size of the economy. It is difficult to see those numbers as sustainable, in our opinion. 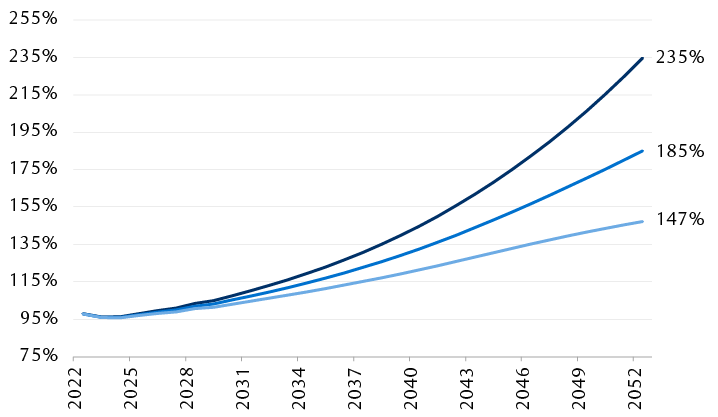 But as economist Herbert Stein pointed out in the 1980s, “if something cannot go on forever, it will stop.” In other words, if the U.S. cannot attract sufficient capital to fund aspirational spending it will be forced to deal with the matter. There are multiple ways to resolve a government debt burden, including paying it back, inflating it away, defaulting, or some combination thereof. Each of these scenarios has a dramatically different investment implication.

To us, that really highlights the key weakness of the debt servicing commentary: it has little to no practical investment implication. We don’t engage in macroeconomic analysis for the fun of it; the goal is to identify exploitable investment opportunities. The investment strategy ”knowing that if nothing changes in three decades, we could be in for some real trouble” has two fatal flaws: one, things do change; and two, the price swings of the next 30 years will likely dwarf any expected profits from the view. It’s both wrong and irrelevant at any reasonable time scale.

Since at least the Reagan administration of the 1980s, readers of the financial press have enjoyed periodic bouts of commentary on the perils of the U.S. budget. The latest concerns on the cost of debt servicing follow prior worries on government borrowing crowding out private investment and bond holders refusing to buy Treasuries. Investing based on those earlier fears would have proven quite costly, and we see little chance that this time is different.

Even investors convinced in the folly of growing government debt loads would be well-served to remember John Maynard Keynes’ admonition that “markets can remain irrational longer than you can remain solvent.”