Against a backdrop of investor uncertainty, market volatility, and central bank stimulus, the price of gold has reached new heights in 2020. RBC Capital Markets, LLC commodity strategist Christopher Louney and Richard Tan discuss gold’s prospects in the second half of the year and beyond, and the precious metal’s relationship to macro trends.

Richard Tan: Many rationales have been put forward to account for the strong rise in gold prices in 2020. Do you see one overarching factor?

Christopher Louney: We believe gold’s price action this year has largely been about uncertainty. Other macro factors—including low or negative interest rates, which are keeping gold elevated—are playing important roles, but a number of the biggest headline issues driving new and growing allocations to gold boil down to uncertainty. Volatility in equity markets, despite buoyant valuations in a number of areas, has come with inherent uncertainty. The prospects for economic recovery and the COVID-19 pandemic itself are almost certainly a key factor in investors’ appreciation of gold too. This, in our view, is the main reason gold exchange-traded-product (ETP) holdings have risen by record volumes this year. It is uncertainty that has brought investors to the gold space in great numbers this year, and it is likely what is going to keep them there. 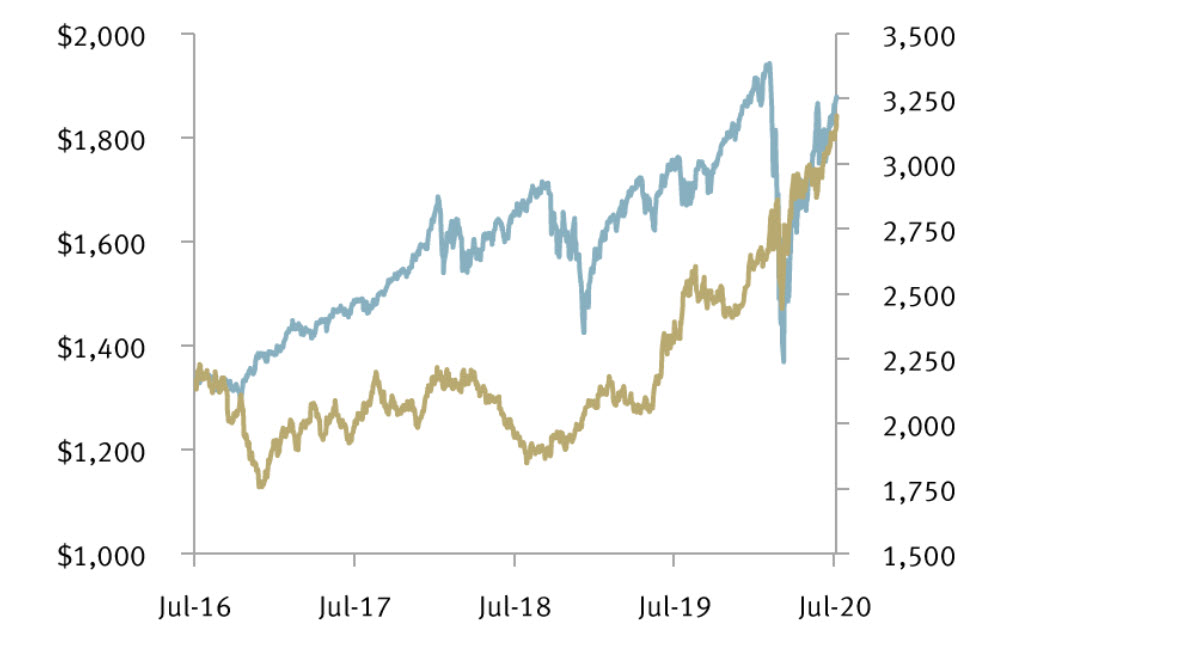 The performance of gold has decoupled from its historical negative correlation with the S&P 500.

What about demand for gold in the real economy—for example, in jewelry? Have higher prices weakened that demand?

Data for early 2020 revealed a massive decline in most components of physical demand for gold. In the largest consumer markets, China and India, we saw year-over-year (y/y) declines of 46 percent and 17 percent, respectively, in consumer demand in the first quarter. Jewelry demand alone fell 39 percent y/y on a global basis, and industrial demand (admittedly, a much smaller component) did not fare well either in Q1; nor was data for H1 overall inspiring. In a normal environment, it would be easy to attribute most of the decline to the price-sensitive nature of a number of consumer demand categories, and of course, that has played a role this year. Gold has reached record highs, and because consumer demand is price-responsive, it can be held back by worsening economic prospects and uncertainty about income growth. That will likely remain a theme for the rest of the year. However, when it comes to jewelry as well as retail bar and coin demand, the closure of retail outlets and the significant friction within the retail supply chain due to stay-at-home orders was the bigger factor as COVID-19 became a global pandemic.

Central banks have accumulated record amounts of gold in recent years. What are your views on Russia halting gold purchases in April, and on the impact of gold demand from oil-dependent nations?

Demand from central banks had been remarkably strong for some time. Having reached an all-time high in recent years, it appeared to be set for sustained, elevated volumes. This sector has accounted for as much as 14 percent of demand in recent years, so a slowdown would be significant. While we continue to expect central bank demand to remain mostly buoyant, news that Russia was halting gold purchases starting in April, and our own view that central banks in oil-dependent countries may be unable to sustain large purchases given the state of oil markets, has wiped out a share of the growth we had expected previously. While some would argue that the current economic crisis may lead some countries to liquidate their holdings due to their indebtedness, the reality is that gold holdings would not make a dent in most countries’ debt levels, even if fully monetized. In that context, we still think demand from central banks will remain relatively healthy.

Some market participants have suggested that recent fiscal and monetary measures could result in higher inflation. Can we learn anything about gold and its correlation to inflation from the financial crisis of 2008–2009?

As was true following the last crisis, many are now wondering whether current fiscal and monetary policies will eventually give rise to material inflation, and thus to runaway gold prices. Many investors see gold as a hedge against inflation, based on an assumption that its value can increase as the purchasing power of the dollar falls. Some feared that an inflation explosion would arrive in the wake of the 2008–2009 financial crisis and the unprecedented easy monetary policy that followed for several years. That inflation surge never came to pass, but gold rallied for a time anyway. In our view, something similar is unfolding now: governments have adopted “whatever it takes” stimulus packages, central bank balance sheets continue to expand, and the world continues to amass negative-yielding debt. Central banks continue to pump money into the economy through strategies such as quantitative easing, and nations continue to take on debt in order to support their economies. Some analysts expect this level of borrowing around the world to eventually result in material inflation. While our base scenario does not assume such outsized inflation, that would be a factor in gold getting to our high scenario.

The opportunity cost of owning gold diminishes in a low-real-rate environment.

Bullion's gains have pushed it toward your Q3 high-scenario price of $2,086/oz. Your low scenario would see it fall below $1,700/oz. What would it take to get us to that level, and how likely do you think that is?

We assign a probability of just 10 percent to our low scenario. The shape of the economic recovery is the swing factor between our gold price scenarios; like the upside risks, the downside risks also center on COVID-19 and its economic impact, as well as the monetary and fiscal policies meant to mitigate that impact. The current resurgence of COVID-19 in the U.S. suggests to us that our low probability assignment for our low scenario is appropriate. But we also need to ask what could unwind gold’s year-to-date strength. For example, what if things suddenly get much better? Although we view that outcome as unlikely, it would probably center on a vaccine narrative, and is still something to keep in mind given the rapid changes that are possible on that front.

We see a 90 percent chance of gold trading in our base/mid to high scenario range. In our base case, gold averages $1,942/oz in Q4, but in our high scenario, we have gold averaging over $2,400/oz in the last quarter of 2020 and over $3,000/oz in early 2021. Currently, with gold now trading firmly above previous record prices it is difficult to understate just how far gold has come in 2020. ETP inflows have been setting records amid all of the uncertainty. We continue to watch the response of states and regions facing a rise in COVID-19 cases given the economic impact of the pandemic and its effect on gold. Risks have grown to the upside, and while the upside is not necessarily unlimited in our view, there are ways to build sustainably into our high scenario. Of course, we must state clearly—at this time, we remain confident in our base/mid to high scenario view overall.