We're adding a seventh recession indicator to our scorecard. What’s new and why is it being added?

All U.S. recessions (shaded regions) have been associated with equity bear markets 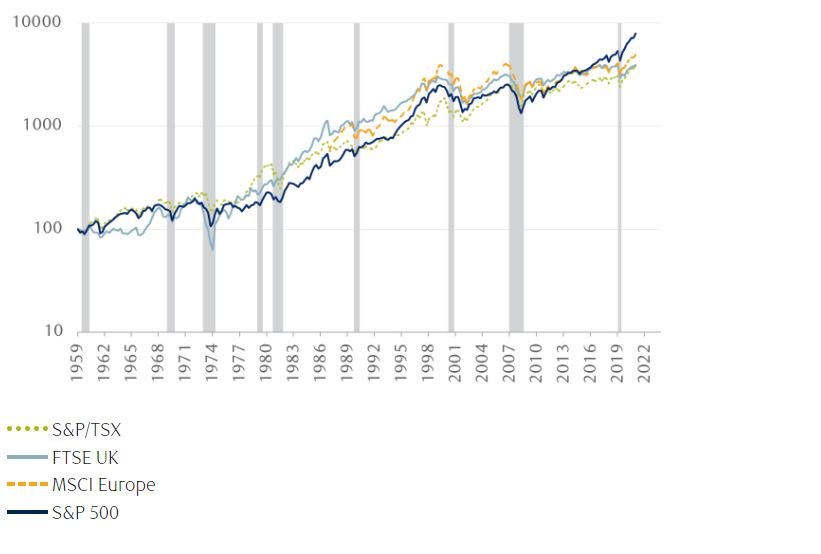 We have monitored six different variables which have done a good job individually and collectively of signaling when a U.S. recession is on the way. Effective with this update we are adding a seventh leading U.S. recession indicator—free cash flow of non-financial corporate business.

All seven indicators are giving readings consistent with this economic expansion having quite a bit further to run. Powerful tailwinds are driving the U.S. economy and most developed economies forward including: extremely easy credit conditions; excess savings totaling about 10 percent of GDP in the U.S. and Canada (somewhat less in the UK and Europe); the need to replenish depleted business inventories; and a U.S. capital spending upswing already underway. It’s worth noting that none of the developed economies, including the U.S. and China, are fully reopened, but we expect they will be as this year progresses.

These economic tailwinds provide good reasons to expect above-trend GDP and corporate profit growth through 2022 and probably 2023 as well. It would be unusual for share prices not to maintain an upward trend for at least another 12–18 months in that case.

This measures the cash generated by non-financial corporate business as a percentage of GDP. It is derived from the Financial Accounts of the U.S. published quarterly by the Federal Reserve. It has given only one false positive signal in more than 65 years. When this indicator has fallen below zero, a recession has followed—typically two to three quarters later. More particularly, shrinking corporate cash flows have most often signaled an upcoming period of weaker capital spending, a highly cyclical component of GDP. Today these cash flows are growing far faster than the economy, and this indicator looks to be in no danger of signaling an approaching recession anytime soon. 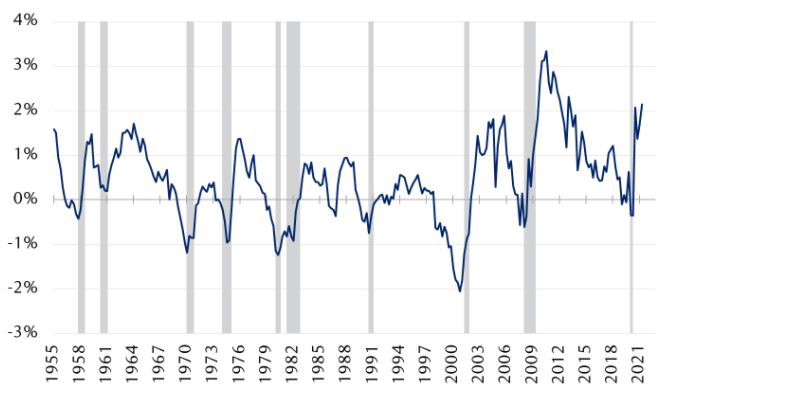 Most of the time the 10-year Treasury yield is higher than the 1-year Treasury yield, but this relationship usually turns upside down (inverts) several quarters before a U.S. recession begins. The monthly data did in fact invert in August 2019, suggesting a U.S. recession was on the way. Most yield curve inversions are caused by the Fed pushing short-term rates higher in an effort to cool down an overheating economy. This last time, however, the inversion was caused by the 10-year Treasury yield plummeting as European and Japanese investors, dissatisfied with negative yields in their home debt markets, rushed into U.S. Treasuries, thereby pushing the price of those bonds higher and the yields they offer sharply lower. There were few, if any, signs that credit conditions had tightened in the U.S. or elsewhere. Nonetheless, the U.S. fell into recession in February/March 2020 keeping the yield curve’s predictive track record intact—undoubtedly by accident, unless one is disposed to believe the credit markets saw the pandemic coming five months ahead of when it arrived.

As things stand today the gap between the 10-year Treasury yield (1.79 percent) and that of the 1-year Note (0.43 percent) stands at a positive 136 basis points. We think any inversion would be at least a year away, probably further.

Yield differential between the 10-year and 1-year U.S. Treasury Notes

A bottoming of unemployment claims has reliably preceded the arrival of a U.S. recession, with the cycle low typically occurring three to four quarters before the recession’s onset. Currently, the smoothed trend of weekly claims continues to move lower. If the trend were to turn higher from here without a new weekly low being set, history suggests a recession would most likely materialize late in 2022 or early 2023. However, with more than 10 million unfilled jobs in the U.S. vs. 6.3 million unemployed and with widespread indications of large, medium, and small businesses unable to find the workers they desperately need, we think a sustained uptrend in new weekly claims is not about to start anytime soon.

When the unemployment rate turns the corner and begins trending higher, the start of a recession is typically two to six months away. The most recent data leaves the 3.9 percent unemployment rate still above its pre-pandemic 3.5 percent low. From here it would take at least six months of readings in the five percent–six percent range to turn the trend convincingly higher and signal a recession is approaching. However, as noted above, with record high job openings and widespread job shortages in an economy not yet fully reopened, we believe any concerning new sustained uptrend in the unemployment rate remains a long way off.

This indicator is something of a hybrid; it is put together by the Conference Board using 10 monthly economic variables. Two of them (Unemployment Insurance claims and the yield curve) figure in our recession scorecard, so there is a bit of double counting here; we don’t know exactly how much, because the Conference Board’s method of dynamically weighting the 10 variables is proprietary. Whenever the LEI has fallen below where it was a year earlier (shown as negative values on the chart), a recession has always followed—typically, about six months later. Currently, the LEI sits about 8 percentage points above where it was a year ago. We think it could take many months of persistent weakness to trigger a negative signal from this indicator. 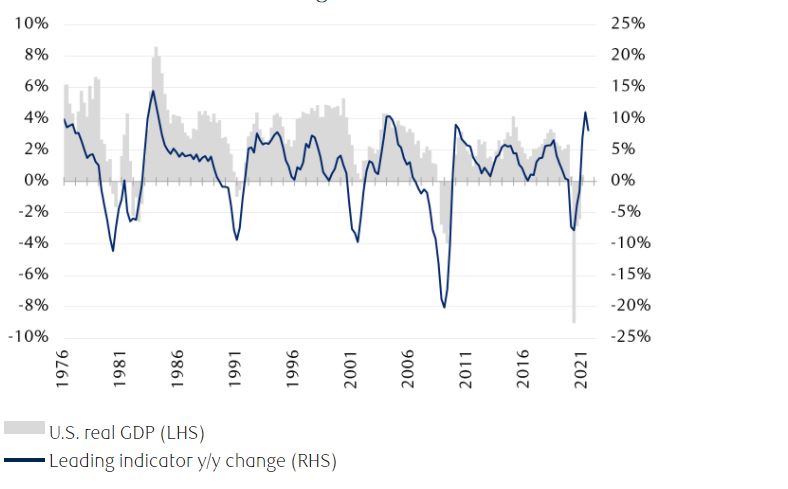 Two components of the ISM Manufacturing Index, taken together, have a helpful track record of signaling recessions as they begin or shortly before they begin. The difference between the New Orders component and the Inventories component has fallen below zero near the start of most U.S. recessions. But it has also occasionally registered a false positive, signaling that a recession was imminent when none occurred. It also only relates to activity in the manufacturing sector (some 15 percent of the economy) and is derived from a survey rather than hard data. Therefore, we view this as a corroborative indicator—one to pay attention to if other, longer-term indicators are implying a recession is on the way. The spread between new orders and inventories has narrowed from its post-pandemic peak of a few months ago but remains well above zero.

Since the federal funds rate arrived in the early 1950s, there has never been a U.S. recession that was not preceded by the fed funds rate rising above the year-over-year nominal growth rate of the economy (the growth rate before adjusting for inflation). As of year-end 2021, we expect the nominal GDP growth rate to have been about nine percent. The fed funds rate is now sitting at 0.1 percent—that’s 8.9 percent below the run rate of the economy, or thirty-five quarter-point Fed rate hikes from here. This indicator implies borrowing rates are nowhere close to high enough to choke off growth in the U.S. economy. Even assuming the nominal GDP run rate has slowed to six percent by the end of this year and that the Fed raises rates three times between now and then (as indicated at its December meeting) rates will still be far short of what it has taken in the past to make a recession likely. This indicator is not a great timing tool—it has signaled recession several times in the past when none has occurred—but it seems to be a necessary pre-condition of recession which we think makes it worth watching.

The unanimity across our recession scorecard strongly suggests the U.S. economic expansion is unlikely to run out of steam anytime soon. However, alongside all the tailwinds noted above are points of contention that are likely to provoke periodic bouts of investor concern and, perhaps, market volatility. These include the course of both inflation and central bank policy as well as China’s property debt issues, geopolitics, Congressional logjams as the midterm elections draw closer, and the prospect of more unsettling curve balls from the pandemic.

While each of these can present problems for equity markets, we think a recession will require a prolonged period of monetary tightening, which has yet to get underway, suggesting the economy, corporate earnings, and share prices have further to run. In our view, the investment climate favours moderately overweight equities positioning until an economic downturn becomes inevitable.

What’s behind the turbulence in fixed income markets?

Rising inflationary pressures have central banks under the microscope, with the most volatile start to the year for fixed income markets in decades.

Investing in the post-COVID world: Where to from here

Investors will have to adjust to different dynamics that are setting the tone for the coming year and beyond. We explore these and other key themes.

Is the U.S. stock market finding some relief for its valuation problem?

The rough January has taken some of the air out of the U.S. market’s most expensive stocks. This is a good sign and supports our constructive outlook.