What’s behind the stock market slump?

With stock markets in another funk, we discuss the overt challenges, some other risks in the background, and what this spells for the equity outlook.

What is front and center?

Equity markets have resumed their downward trend, with the S&P 500 falling 7.7 percent so far this month as of April 27, testing the March lows, and other major indexes outside of the U.S. have pulled back as well. The S&P 500 has declined 12.8 percent from its all-time high in early January. 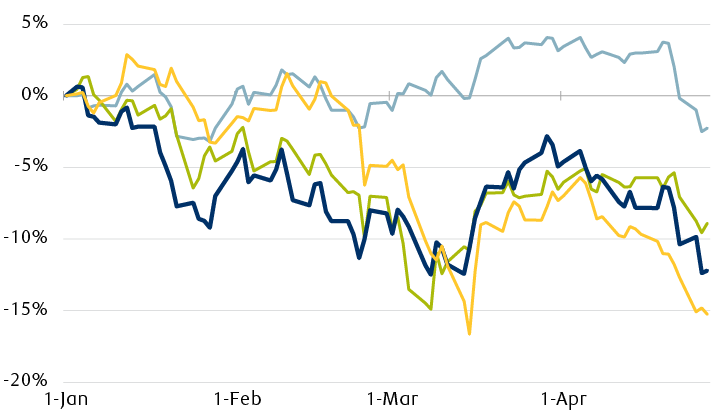 Line chart showing four equity indexes, all of which are in negative territory for the year. The paths are similar, first starting with a pullback in the second-half of January, then markets rebounded slightly, then they dipped meaningfully in late February through early March, then they rebounded in the second-half of March, but they have all resumed their declines this month through April 27. Canada's S&P/TSX Index has held up the best; it is down 2.3% year to date. The S&P 500 and MSCI Emerging Markets Index are now both down near their March lows at -12.2% and -15.3%, respectively. The STOXX Europe 600 is down 8.9% year-to-date, and is the only index of the four above its March low.

Lately, markets have been pressured primarily by three factors:

The potential for further deceleration in global economic growth: This stems from the renewed COVID-19 lockdowns in China and their potential to exacerbate supply chain problems. Also, the ongoing sanctions and counter-sanctions risks related to the Russia-Ukraine conflict have impacted some supply chains and continue to put a premium on commodity prices. Recession risks for the U.S. and Canada are still relatively moderate by our indicators, but we think they have increased for Europe, while growth for China and the global economy could decelerate beneath current consensus forecasts.

The Fed’s even more aggressive rate hike rhetoric: The Fed indicated it plans to pull its rate hikes forward, packing more of them into 2022 in order to fight inflation. At this stage, we think it’s difficult for economists and market participants to forecast the degree to which rate hikes will impact economic and earnings growth, and the pace and magnitude of the hikes. So far this year, consensus U.S. GDP forecasts have come down for 2022 and 2023 in anticipation of more rate hikes. But we don’t think they have come down enough, especially given the negative result just released that preliminarily indicates Q1 GDP declined 1.4 percent largely due to a much-wider-than-expected trade deficit (strong imports coupled with weak exports) and soft inventory growth. Together, these items subtracted four percentage points from Q1 growth, more than offsetting solid household demand and business investment. We anticipate economists will reduce their full-year 2022 estimates and could trim other quarters too.

Economists’ consensus U.S. GDP forecasts at the beginning of the year versus April 28, 2022 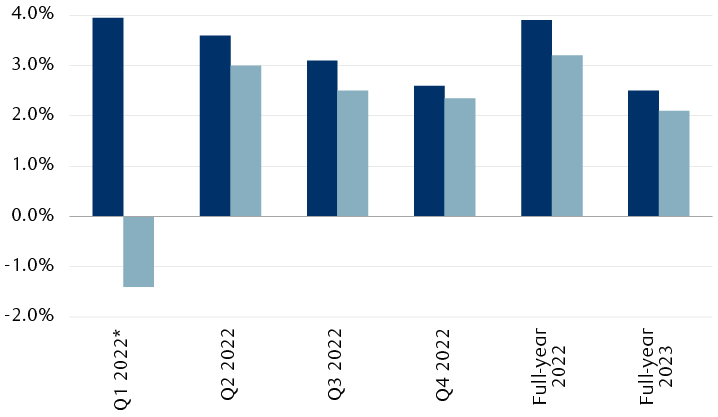 * The Q1 2022 forecast for April 28 represents the official preliminary Q1 GDP growth result according to the Bureau of Economic Analysis.

Also, even if the year-over-year inflation rate has already peaked or could soon, market participants are debating just how much the Fed will be able to impact inflation and how “sticky” it will be. RBC Global Asset Management anticipates headline inflation will decelerate in the second half of this year but will still be “uncomfortably high” at year-end.

Cracks in the corporate earnings story: The aggregate Q1 earnings and revenue results for S&P 500 companies have been good thus far. However, there have been some notable misses and/or cautious guidance by high-profile firms including Texas Instruments, Alphabet (Google), Boeing, Whirlpool, JPMorgan Chase, Netflix, PayPal, Harley-Davidson, and Baker Hughes. This, combined with the above two headwinds, raises questions about earnings growth prospects going forward, specifically whether consensus forecasts could come down.

What is lingering in the background?

Military developments on the ground in Ukraine have been barely mentioned in equity trading notes of our research providers recently, which indicates the conflict is not currently the market’s focus like it was in late February to early March. But related geopolitical risks linger, and we don’t think they have been fully factored into equity prices.

The military conflict could escalate into a more direct Russia-NATO clash in various scenarios. The Kremlin warned of this once again on April 27 by stating it is ready to respond in a “lightning fast” manner if “someone intends to interfere in the events taking place from the outside and creates threats of a strategic nature unacceptable to Russia.”

Tensions have already increased with NATO countries’ deliveries of heavy weapons to Ukraine through Poland, and some Western defense officials’ statements supporting Ukrainian strikes on Russian territory. Also, recent instability in a small disputed region that borders Ukraine, the Pridnestrovian Moldavian Republic (also known as Transnistria), underscores that the military conflict could spill into a third country. Furthermore, it’s unclear how NATO would respond if Russia and its allied forces continued to consolidate and expand their gains in eastern and southern Ukraine, and if they ultimately advance into other Ukrainian regions.

Other risks for markets are that European energy supplies could be disrupted further, and additional sanctions vulnerabilities remain. Russia now requires payment for natural gas in rubles instead of dollars and euros from countries that have sanctioned it. This policy is in response to Western countries’ freezing of a significant portion of Russia’s central bank assets and blocking of dollar and euro transactions via the SWIFT payment system. While some European countries (Hungary, Austria, and companies in other countries) have reportedly agreed to pay for gas with rubles, others have rejected this (Poland and Bulgaria). If Russian natural gas is blocked due to a refusal to pay in rubles or by some other sanctions/counter-sanctions policy, a number of industrial leaders and CEOs in Germany have warned of severe negative consequences for the German economy.

Meanwhile, the U.S., EU, and their allies are contemplating more economic sanctions, and Russia could add more counter-sanctions. Even after the Russia-Ukraine military hostilities decrease meaningfully or end, we think most if not all of the anti-Russia sanctions by the U.S., EU, and allies will remain in place. Therefore, energy, industrial metals, and agriculture commodities will likely continue to be priced with a “sanctions premium”—higher than they would have been had the Ukraine crisis not occurred—at least for the time being.

Give the market time to work things out

Given the lingering supply chain, inflation, growth, and geopolitical risks, there is a wider range of potential outcomes for the global economy and corporate earnings for this year and next than there was just a few months ago. It could take time for the market to work through the uncertainties and there is risk of a deeper pullback along the way.

We continue to believe the S&P 500 has the potential to be higher than current levels in the next 12 months primarily because U.S. recession risks are no worse than moderate as things stand, a number of economic indicators are sturdy, and earnings trends are still generally good. As long as the end result is an economic “growth scare” instead of a full-blown recession, and Russia and NATO avoid direct clashes, we think any further market downside should be limited.

What opportunities could a slower-growth environment create for corporate bond investors?

Fed tightening is coming at a time of relative strength for the U.S. consumer. We look at what this means for fixed income investors.