The U.S. equity market is still in rally mode one year after the swift COVID-19 plunge. The S&P 500 has surged 75 percent since its March 2020 low, and has climbed 15.5 percent above the peak it reached right before the pandemic began.

As stimulus has flooded the system and pandemic risks have slowly receded, leadership within the market has shifted meaningfully, impacting portfolio performance.

Initially during the pandemic, growth stocks dominated by a wide margin—particularly those of the largest technology-oriented firms. This segment also led during the past decade as powerful long-term secular trends took root in the digital and social media spheres. But as the growth rally progressed in 2020, valuations in the segment became increasingly expensive.

Last November, value stocks took the baton as economic recovery prospects brightened, the corporate profit outlook improved, and Treasury yields rose. With value maintaining its lead, a key consideration for portfolio positioning is: Does the move have legs?

Value’s staying power has been questioned for years. The category—comprised largely of Financials and Industrials, and with a greater proportion of Telecom, Energy, Materials, and Utilities than the growth category—has experienced only fleeting moments of glory in the past decade, as the chart illustrates. Since the beginning of 2010, the U.S. Russell 1000 Growth Index has rallied 378 percent, while its companion Value Index has risen only 161 percent.

Prior periods of value outperformance were fleeting 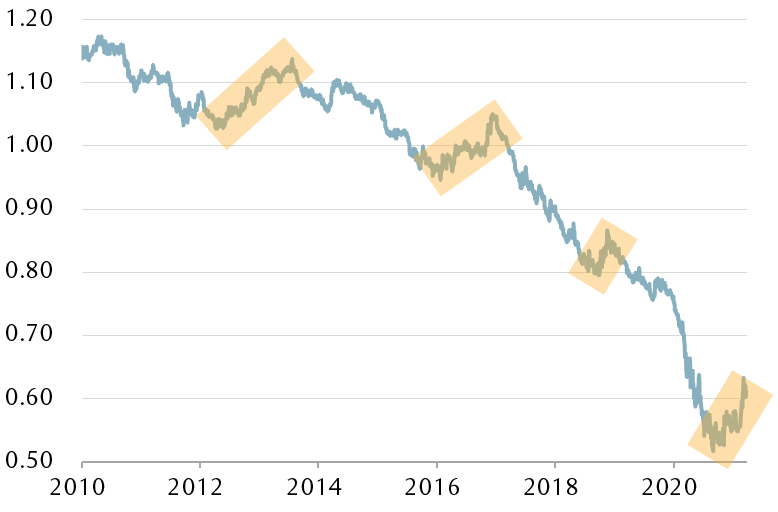 However, there have been prior periods in history when value meaningfully outperformed growth. At this stage, we think the long-held skepticism about the value segment’s potential is less warranted.

Reasons to believe in value

From our vantage point, there are five main reasons that value stocks are likely to have staying power for the rest of this year, at least.

The economic cycle favors value. The early stages of an economic recovery, when GDP growth accelerates and then becomes entrenched, are usually marked by rising Treasury yields, increasing inflation expectations, rising commodity prices, and the steepening of the yield curve (when longer-term Treasury yields rise more than short-term yields). We think these macro dynamics favor value because the segment has a meaningful share of cyclical stocks in the Financials, Industrials, Materials, and Energy sectors, which are quite sensitive to changing economic trends and should benefit as the economy reopens. 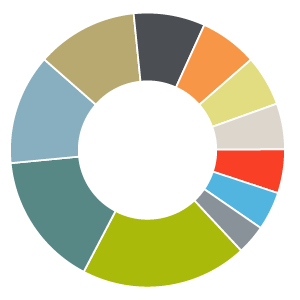 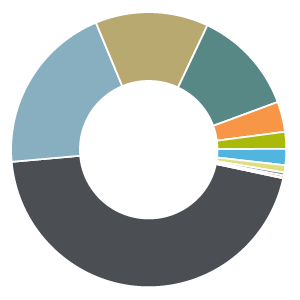 Earnings momentum could surprise. Earnings growth for the value segment is expected to exceed that of the growth segment by a wide margin in 2021, according to consensus forecasts, due to the anticipated snap-back in the economy and the cyclical nature of key value categories. While this is well known among institutional investors, we think there is upside to earnings estimates. For starters, cyclical earnings estimates are notoriously too conservative coming out of recessions. Importantly, RBC Capital Markets’ U.S. economics team believes growth during the reopening could well exceed consensus GDP forecasts. If the reopening is indeed strong, S&P 500 consensus earnings and revenue estimates could be “far too low,” according to our national research correspondent. Its analysts think cyclical stocks, including those in the value category, stand to benefit.

Value is still less expensive than normal relative to growth. Despite growth’s underperformance since last November, the value segment still looks inexpensive versus growth in light of historical norms, according to RBC Capital Markets’ price-to-earnings (P/E) analysis. This is corroborated by the firm’s comprehensive valuation model, which incorporates 34 different metrics.

Dividends are more abundant—and in demand. The current dividend yield of the Russell 1000 Value Index is 2.0 percent, well above that of the Russell 1000 Growth Index at 0.8 percent. We think equity dividends will be in demand among individual investors amid the low bond yield environment, regardless of whether yields drift up further. Bond reinvestment rates aren’t what they were five years ago, and anecdotal evidence indicates that investors are using dividend-paying stocks to help fill the income gap.

Momentum funds could add fuel. Even though value has outperformed recently, so-called “momentum funds” have yet to fully embrace the move. These funds tend to follow market trends, increasing positions in segments and stocks that are doing well in order to “ride the wave,” so to speak. But they typically add exposure with a lag—meaning after trends have started to take hold. We think momentum funds will increase their exposure to value in the months ahead.

Beyond this year, RBC Capital Markets’ equity strategy team believes value stocks’ longer-term staying power will depend on the magnitude of economic growth—the longer GDP growth can stay above trend, the better value’s potential to put together a longer winning streak. Fiscal stimulus and ultra-loose monetary policies are tailwinds and should lift GDP at healthy rates this year and next, but it is unclear how these dynamics will play out in 2023 and beyond.

While well balanced portfolios should include both value and growth exposure, we would continue to Overweight value for the time being, and would pay particular attention to cyclical sectors such as Financials, Materials, Industrials, and Energy that should benefit as the economy opens up further. We believe value stocks have the ability to outperform growth stocks this year, at least.

This article was originally published in the Global Insight Weekly with the title “Is 2021 the year of value stocks?”

FinTech and the future of finance

The convergence of finance and technology can help make economic growth sustainable by empowering unbanked populations.