The S&P 500 and Nasdaq fell 4.3 percent and 5.2 percent, respectively, on Tuesday following a disappointing consumer inflation report. These are the biggest single-session losses since June 2020, which was soon after the most acute stage of the COVID-19 crisis. Roughly half of this summer’s bounce has eroded.

While headline inflation is starting to recede, so far the pace has been slow. The Consumer Price Index (CPI) registered at 8.3 percent year over year in August. This is lower than the previous two months, but higher than Wall Street economists’ 8.1 percent consensus forecast.

Also, the important core CPI rate, which excludes food and energy, jumped to 6.3 percent year over year and is near the peak level reached in March. Economists had expected it to rise in August, but not by this much. 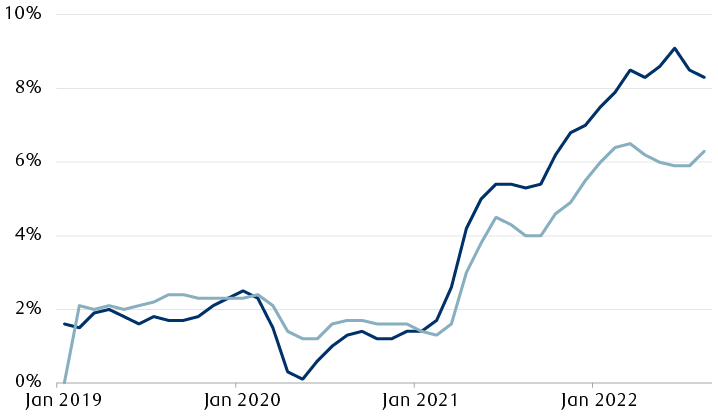 Line chart showing that after a period of relatively steady inflation around 2%, the headline and core consumer inflation rates dipped during the COVID-19 crisis in 2020, and then went on to surge starting in early 2021. The peak in core inflation was reached in March of this year at 6.5%, and the peak in headline inflation was reached in June at 9.1%. Since then, the headline rate has drifted down to 8.3%, and the core rate drifted down some but then rose again to 6.3% in August.

This market calls for patience

We do not think this is the time for long-term investors to turn bearish on stocks or throw in the towel just because inflation has yet to be fully extinguished. The market has been grappling with this issue since January, and it was the cause of a deeper decline in the spring through early June.

We have not expected this problem to get resolved quickly, and there could be more bouts of market volatility until it becomes clear that inflation will eventually head down toward more normal levels.

When it comes to equity positioning, we think four factors will require some patience:

The market seems like it’s coming to the realization that inflation and the related challenges will not lift overnight, and economic conditions could deteriorate further in the next six months.

For long-term investors, we continue to recommend holding Market Weight (neutral) exposure to U.S. equities, and we would include a mix of defensive and growth stocks, with a tilt toward quality stocks. This is designed to balance lingering recession risks with the possibility that the eventual ebbing of inflationary pressures and slowing growth next year could provoke a change of heart by the Fed at some point in 2023.

Keep in mind, during periods of economic duress—often when headlines are at their worst and investor sentiment is rather negative—early hints of economic green shoots typically spark new bull market cycles even before recessions end. And the period surrounding U.S. midterm elections has historically brought some welcome surprises for the U.S. market.