The growing risk of a default by Evergrande, a Chinese conglomerate with a focus on property development, appeared to come to a head this week when the company missed a required loan payment on Monday. Concerns as to the fallout of the potential $305 billion default led the Hang Seng Index to drop three percent and the S&P 500 to decline 1.7 percent on Monday. Markets partially recovered by midweek on news that Evergrande negotiated a deal with bondholders to satisfy an interest payment due this week, although bond market pricing—and credit rating agencies—continues to point toward a high risk of an eventual default.

The size of a potential Evergrande default and its impact on the massive Chinese property development industry may create a longer-term headwind for global growth. But the broader macroeconomic conditions and Chinese policy flexibility mean that concerns over a repeat of the global financial crisis of 2008—or even the Asian financial crisis of the late 1990s—are likely significantly overstated, in our view.

Instead, we see concerns around the policy response and associated risks prompting some near-term profit-taking, which may lead to moderate pullbacks in equity and corporate bond markets. We would highlight, however, that this is not an unexpected or unhealthy outcome at this stage in the recovery, particularly with still strong year-to-date equity market performance. 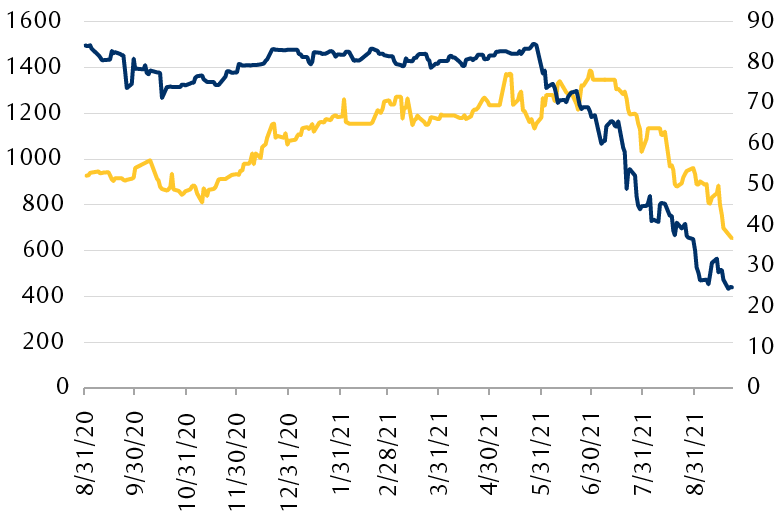 Evergrande’s troubles have been well-telegraphed; as a result, few investors are likely to have significant sums borrowed against their holdings of the troubled property developer. We expect this lack of leverage to translate into fewer margin calls as Evergrande’s bonds and equity decline, so investors would not be forced to sell other holdings to raise funds.

Nor do we see Evergrande’s drop as the initial domino in a broader selloff, much as the Thai baht was at the beginning of the Asian financial crisis. That crisis occurred with significant macroeconomic imbalances, particularly acute among large debtor nations with fixed currencies. Far from being a debtor, China today has one of the largest net creditor positions in the world, which the International Monetary Fund estimates at over $2 trillion; the U.S., by comparison, owes an excess $14 trillion to the world at large. It’s true that China’s budget has been stretched by the pandemic, but we do not see any shortage of capacity to manage Evergrande and its fallout.

Without the added complications of debt and leverage, the direct international implications of any Evergrande default on financial markets are potentially limited. But the stakes are higher for the domestic Chinese economy, in our opinion.

The combination of leverage and scale amplifies the risks of China’s policy response, in our view. Left unchecked, the concern is that Evergrande’s problems will set off a negative spiral: forced real estate sales by that company will cause declines in the value of projects of other companies, leading banks and others to cut lending. This lack of liquidity can force more distressed sales, prompting further reductions in lending and a potential disruptive contraction in the sector. Such a chain of events could imperil the banks themselves if land values dropped quickly and deeply enough.

Fortunately, Chinese officials are well aware of the problem, and have already stepped in to provide additional liquidity to the market, adding as much as $14 billion in short-term funds to the financial system on Friday, Sept. 17.

A difficult task ahead

At the same time, Chinese policymakers have been clear that they want to see a gradual deleveraging in the real estate sector and have tightened lending requirements for property developers. This highlights the contradictory requirements for effective policy: it needs to offer sufficient incentives and security to keep lenders providing credit to the sector, while providing enough restrictions to keep credit from growing as fast as or faster than the overall economy.

The result is a very small window for successful policy action, in our view: pressing the brakes too quickly risks a negative cycle that could spiral out of control; applying them too slowly would allow leverage to increase, likely raising the cost of future action.

There are many reasons to believe that China will be able to manage the difficult slowing process. First, it has significant resources. In addition to the huge stock of savings, the country has well-developed capital markets to allocate those savings. China also has experienced policymakers and the benefits of international experience. Finally, even if China’s current intention is to force a deleveraging in the property sector, recent global financial history has repeatedly demonstrated that policymakers—when confronted with large market selloffs—tend to prioritize market stability over longer-term policy goals. If China makes the same choice, investors will likely benefit in the short term.

Even if China avoids a broad market decline, a deleveraging would not be costless. Slowing a sector that accounts for 25 percent of the economy represents a meaningful headwind to domestic growth; China’s importance to the world economy means any slowing there would have global implications. We see the potential headwind to global growth as manageable, but we view it as a more substantial long-term concern than the current bout of market volatility.

Although we see a low chance of a credit markets crisis sparked by any eventual Evergrande default, the task ahead for Chinese policymakers is complex and difficult. We believe that they have the institutional and financial capacity to resolve the issues and that they will avoid sparking a domestic crisis that would morph into an international financial event.

As for equities, pauses or setbacks are a normal occurrence at this mid-cycle stage of the bull market, or once earnings growth has peaked. RBC Capital Markets, LLC’s Head of U.S. Equity Strategy Lori Calvasina points out that in the three bull market cycles going back to 1993, the S&P 500 declined by a range of one percent to 7.6 percent in the six months following the peak rate of earnings growth. The effect was temporary, however, and the S&P 500 eventually resumed its upward trajectory. As the situation in China evolves, equity markets could be prone to correction and consolidation, but we would expect a similar constructive pattern to eventually emerge.

Inflation aftershock: The implication for investors

Consumer prices are the highest in years. What are the risks for the equity market?