With this week’s policy meeting, the Fed had the opportunity to update its economic forecasts for the first time since last December, a stretch when the market’s expectations for growth and inflation have jumped sharply, largely on the back of sustained fiscal aid and the vaccine rollout. The Fed did that, and then some.

Policymakers now see above-consensus growth of 6.2 percent in real U.S. GDP for 2021, accompanied by the unemployment rate falling to 4.5 percent, from 6.2 percent currently, and all the way back to 3.5 percent by 2023, and inflation remaining above the two percent annual target throughout the forecast horizon, if only modestly so.

But as those types of upgrades were largely expected by the market, the bigger question—or concern—was whether the Fed would signal that rate hikes are now on the horizon. While a few more of the 18 members of the Federal Open Market Committee (FOMC) see rate hikes over the course of 2022 and 2023, the core majority of the FOMC still expects that rate hikes won’t be necessary—even on the back of a strong economic recovery. This is largely due to the new average inflation targeting regime, which will require greater than two percent inflation for a period of time to make up for past shortfalls—and easy monetary policy will be needed to achieve that.

This is all … quite normal, actually

But even with the confirmation that the Fed still plans to keep rates on hold for years, Treasury yields have continued their ascent in the aftermath of the Fed meeting, with the benchmark 10-year yield breaching 1.75 percent at one point, the highest level since January 2020.

In our view, this is simply a reflection that the Fed’s messaging was a success. Short-term Treasury yields remain well-anchored on expectations the Fed won’t tighten policy, while longer-term yields are recovering to more normal levels on a robust economic outlook. Just as flattening and inverting yield curves were a market signal of heightened recession risks throughout 2019, the ongoing steepening of yield curves should signal the opposite.

But the sharp rise in Treasury yields continues to be the focus of investors, amid some fears that it could be detrimental to stock market performance, and even for economic growth. From the lows for Treasury yields last summer, to 1.75 percent this week, the benchmark 10-year yield has jumped by over 120 basis points (bps). The chart below shows past periods when the 10-year yield has increased by similar magnitudes over brief periods. The key thing to note is that stocks performed strongly during each of these episodes; historically, it has been falling Treasury yields that have been a greater threat to risk assets, as in 2001 and 2007. 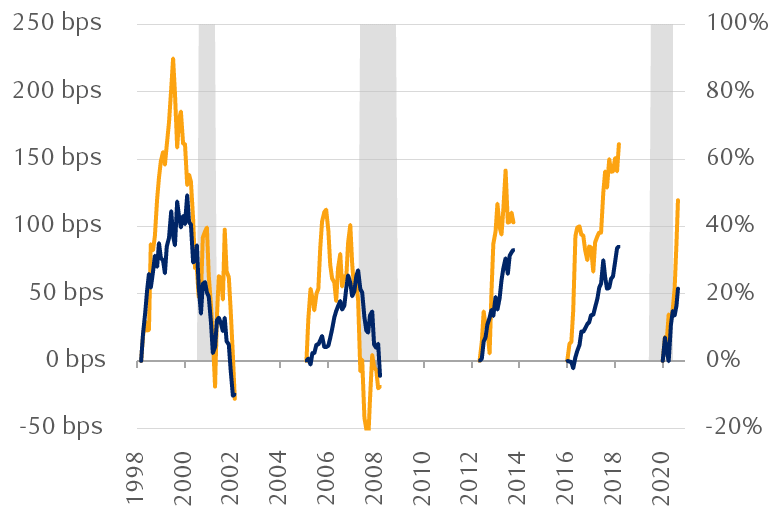 Note: Chart shows periods when the 10-year Treasury yield has risen by over 100 basis points (bps) in less than eight months.

What’s next for the Fed?

The last focus item for markets with respect to the Fed this week was whether the Fed might step in to quell rising Treasury yields, via a shift and/or an increase in its ongoing asset purchase program of $80 billion per month in Treasuries, and $40 billion of mortgage-backed securities.

But just as the Fed sees little need to raise short-term policy rates anytime soon, it currently sees little need to intervene in markets in order to keep a lid on yields. Again, we think the Fed is more than comfortable with rising Treasury yields, as long as it’s reflective of growth and inflation. Absent significant market dislocation, we don’t expect the Fed to step in to markets with an effort to keep yields low. 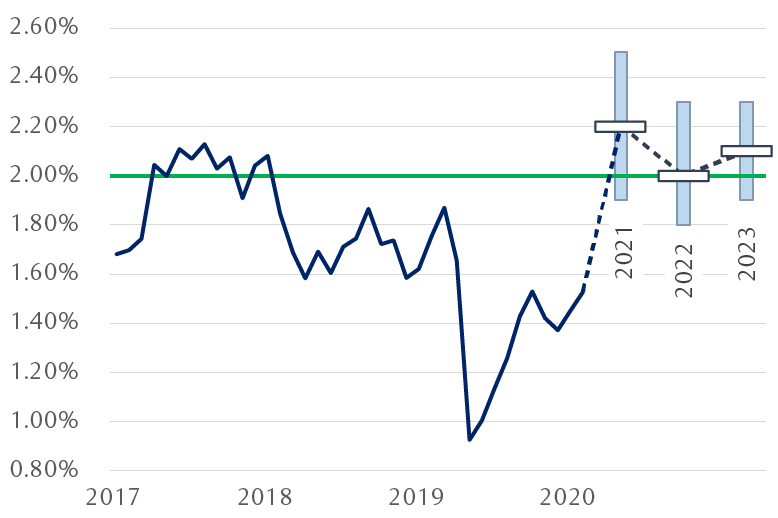 The next thing for investors to watch is likely the June FOMC meeting, when the Fed could begin to lay the groundwork for tapering, i.e., reducing, its asset purchase program, the base case for which would commence around the end of the year.

Confident in the outlook

Though the rise in Treasury yields has been historic this year, we still think there may be room to run. During past economic recoveries the yield curve as measured from 2-year Treasuries to 10-year Treasuries has steepened to about 225 bps on average in the aftermath of a recession. As discussed, it has steepened to only 160 bps so far. In our view, the 10-year Treasury will hold a range of 1.75 percent to 2.25 percent this year, which would be consistent with that type of trend. However, levels above that may attract the attention of the Fed. But as yield curves steepen, fixed income investors will likely be keen to begin putting money to work further out on yield curves.

We continue to believe that risk assets can continue to perform well amid rising yields. The bigger risk historically has been tighter monetary policy, but with the Fed’s commitment this week that tighter policy is nowhere on the horizon, markets should be free to run.

This article was originally published in the Global Insight Weekly with the title "The Fed is dead, long live the Fed."