A number of technologies have emerged to help make the world we live in more sustainable. More are on the horizon. Many are the result of innovations and will likely enjoy secular growth, perhaps for decades.

This report looks at the importance of sustainability from an investment perspective. It highlights some of the technologies and innovations that could help curb the greatest threats to the sustainability of the global economy. In our view, companies at the forefront of developing technology solutions to sustainability issues may offer compelling long-term investment opportunities.

Why sustainability as an investment theme?

Sustainability has become a key concern for companies and investors alike in recent years. It is understood that both can benefit if growth and profits are sustainable—not earned at the cost of the depletion of natural resources and the deterioration of human living conditions, nor at the expense of future generations. For companies, sustainability has ramifications beyond their main business activities—it may also encompass the way offices and places of business are located or configured, or the manner in which products are distributed.

A large majority of companies are now using their annual reports to speak to their progress on this front. The KPMG Survey of Sustainability Reporting 2020 found that out of a survey sample of the largest 100 companies by revenues in 52 countries, 80 percent reported on sustainability. Interestingly, the U.S. leads with 98 percent of its 100 largest companies reporting on sustainability, compared to 92 percent in Canada, 85 percent in Western Europe, and 84 percent in Asia-Pacific.

Investors approve. According to Morningstar, assets in sustainable funds hit a record high of $1.7 trillion at the end of 2020, up from just under $1 trillion a year earlier. The rapid growth was driven by a combination of record inflows, existing funds repurposed to make sustainability a major decision factor, and rising markets.

In the March edition of Global Insight, we explored how climate change is one of the biggest threats to the sustainability of the global economy. Several other pressing challenges also need to be addressed to ensure we can continue to enjoy economic growth for decades to come. Among the most preoccupying threats to sustainability being discussed at the government and agency level are diminishing access to fresh water, the massive proliferation of waste from human activities, and the lack of social progress.

Access to fresh water has diminished greatly over recent decades. Agriculture consumes more water than any other activity, while inefficient manufacturing processes, storage, and transportation often result in waste. Climate change and industrialisation have also played their part.

According to the World Wildlife Fund, 1.1 billion people globally lack access to fresh water and as many as 2.7 billion experience water scarcity during at least one month of the year. The disastrous UK floods of 2015 and 2019, recent severe flooding in France and Italy, the prolonged disruption to shipping resulting from record-low water levels on Germany’s Rhine River in 2018, and the crippling flood in Houston, Texas in 2019 (one in a string of three “once-in-500-year” floods in the same region) all serve to remind us that this is not solely an issue confronting emerging markets.

Water scarcity is also an acute problem for China’s growth. The country is home to 20 percent of the world’s population but contains just seven percent of its fresh water. Moreover, pollution limits the amount of available fresh water as 70 percent of lakes and rivers in China are polluted, according to the World Economic Forum (WEF).

The huge amount of waste the world generates each year is another growing threat to sustainability and global prosperity. According to the World Bank, two billion tonnes of solid waste, enough to fill over 800,000 Olympic-sized pools, was generated in 2016, the last year for which global figures are available. Of this, a mere 16 percent was recycled, with 46 percent disposed of in a manner which threatens the environment. Rich countries burn their waste, releasing greenhouse gases (GHGs), while others dump it in rivers and oceans. At the current rate, the WEF estimates that by 2050 plastics will outweigh fish.

Waste generation is set to increase in all regions by 2050, though at an accelerated pace in some 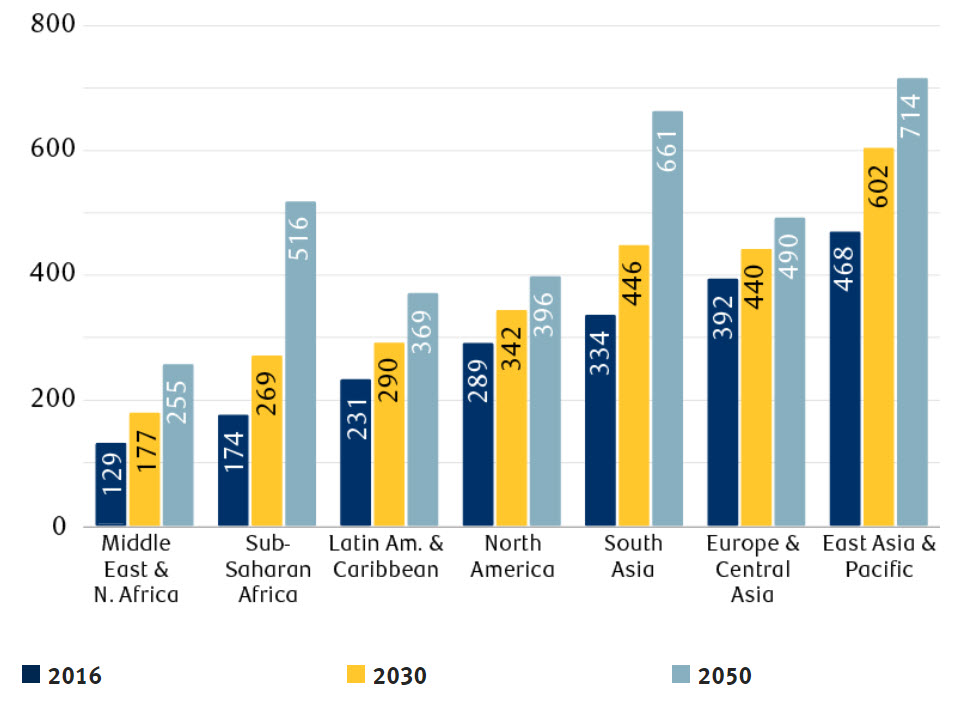 Finally, there is a growing appreciation that a lack of social progress could also inhibit the global economy from realising its growth potential. Annual global GDP growth slowed from an average of 3.8 percent over 1960 to 2000 to just 2.9 percent in the most recent decade. A March 2021 study by Bloomberg economists suggests that global GDP could see a $20 trillion boost by 2050 if women were to enjoy the same levels of education and employment as men, relative to a baseline scenario of persistent gender inequality. Meanwhile, a Goldman Sachs study indicates that closing the 35 percent pay gap suffered by Black women in the U.S. could add $300 billion to U.S. GDP per year, or 1.3 percent of the country’s $21.4 trillion economy.

Our recent climate change article argued that tackling these challenges requires the dual involvement of governments (via regulation, incentives, and funding) and the private sector. Innovation and technology will play critical roles in creating solutions to make a more sustainable global economy. In our view, companies at the forefront of developing such solutions potentially offer compelling long-term investment opportunities.

We group these opportunities in five overarching themes:

The table below shows how each can help tackle the threats outlined above.

We will delve into each theme in more detail in the coming months.