Markets are looking for the Fed to cut rates. Can a case be made, or would it resurrect a relic of the zero percent rate era: financial stability concerns?

U.S. stock markets have recovered to near record highs, the U.S. unemployment rate remains historically low at just 3.8 percent, individuals filing jobless claims for unemployment benefits fell to just 192,000 during the week of April 13, the lowest since the 1960s, and Q1 economic growth is likely to be stronger than previously expected—that doesn’t quite seem like the type of environment where the Fed would look at cutting interest rates.

And yet, White House economic advisor Larry Kudlow has recently called for rate cuts of 0.50 percent, adding that he is “echoing the president’s view—he’s not been bashful about that view—he would also like the Fed to cease shrinking its balance sheet.” And while we disagree with the explicit and public comments from the administration on the Fed’s implementation of monetary policy on the basis of the importance of the Fed’s independence, markets too continue to price at least a 50 percent chance that the Fed’s next move is to lower rates within the next year.

It was stock market volatility at the end of 2018 that was thought likely to put the Fed on pause until financial markets steadied, as seen in the chart. However, even now that the recovery for stocks is complete, markets still don’t see any rate hikes in the pipeline.

So what’s going on? With all of the headlines and debate centered on rate cuts rather than a continuation of rate hikes, is there a fundamental case to be made for the Fed to move in that direction?

Despite complete recovery for stocks, no further U.S. rate hikes seen in the pipeline 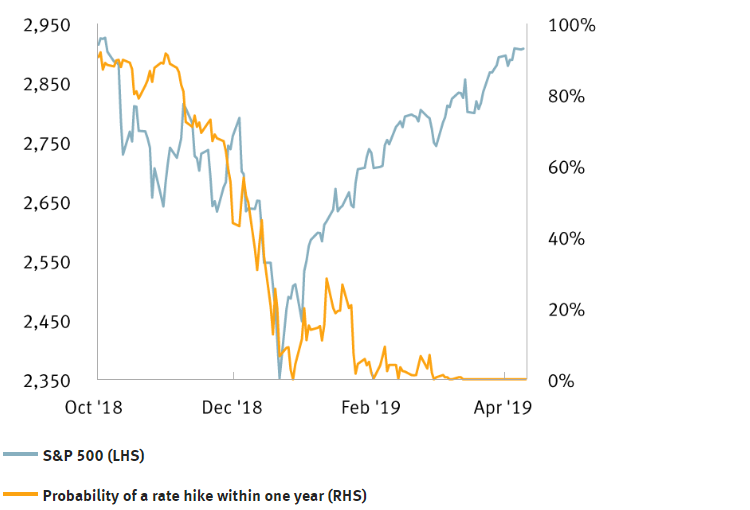 According to the minutes of the Fed’s March 20 meeting where the Fed signaled no further rate hikes this year, officials were clearly worried about inflation expectations and global weakness. On inflation, policymakers noted that long-term expectations are too low and not consistent with the two percent target, while global growth concerns remained front and center following the European Central Bank’s moves to extend forward guidance and lending facilities amid a weaker outlook.

But perhaps another way to think about the case for a modest rate cut is that the Fed originally planned to raise rates just three times in 2018. It wasn’t until the impact of additional fiscal stimulus on growth via the 2018 tax reform package that the Fed signaled a fourth rate hike in June of last year, which was delivered in December. Now that the stimulus injection from tax reform has largely run its course, perhaps that might justify one 0.25 percent rate cut, and why markets are priced for just that.

To be sure, part of the reason that stock markets have recovered so strongly, and so quickly, is the Fed’s pivot to forecasting no further hikes this year, from two previously expected. While there may be a case to be made that the Fed has room to lower rates modestly on account of low inflation and global uncertainty, the sharp rally in equity and credit markets may resurrect a relic of the era of zero percent interest rates: financial stability concerns.

The Fed has two official mandates, maximum employment and price stability. The unofficial third mandate is financial stability. The common worry during the era of zero percent interest rates was that Fed policy would fuel excessive risk taking and asset bubbles. Now a few years removed from that, and with the economy even closer to operating at full capacity, those risks may be even greater should the Fed act too quickly, or even at all, in cutting rates. And in credit markets, we are seeing signs that investors are once again “stretching” for yield.

Since the start of the year, and largely due to the Fed’s rate hike outlook, analysts have lowered their 10-year Treasury yield forecasts for the end of 2019 to just 2.75 percent, from as high as 3.40 percent as recently as December. And with the 10-year yield still only 2.55 percent, yield in the rest of the U.S. fixed income market has pulled a disappearing act.

As Treasury yield forecasts are cut drastically, investors are once again stretching to find yield 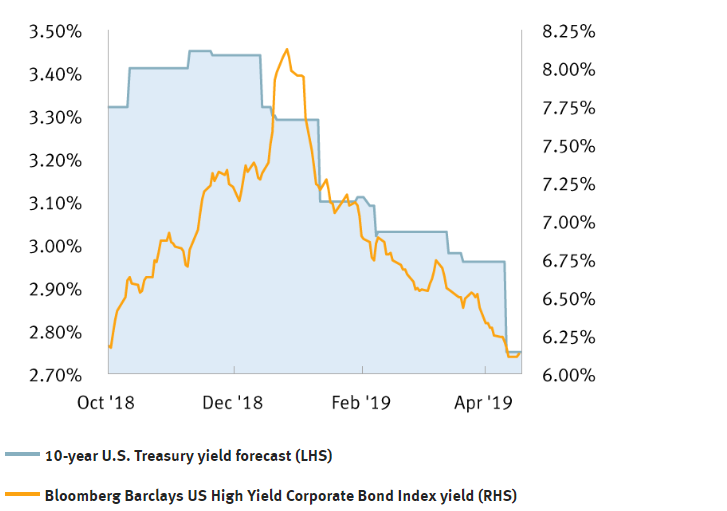 The average yield on the Bloomberg Barclays US Investment Grade Corporate Bond Index has fallen to 3.68 percent, from nearly 4.20 percent at the beginning of the year. As a result, investors appear to be moving down the credit quality spectrum and into high-yield corporate bonds in search of yield. Thus far in 2019, investors have funneled money into high-yield funds at a much faster pace than into similar investment-grade funds. As a percentage of total assets, flows into the largest high-yield funds have increased by 21 percent, compared to just eight percent for investment-grade. That demand, along with the rally in stock markets, has fueled a rally in high-yield corporates, with the Bloomberg Barclays US High Yield Corporate Bond Index yield now on the verge of slipping below six percent for the first time since 2017. In the later innings of this economic cycle, it’s once again the case that investors are not being adequately compensated for the risks.

As the minutes showed, the Fed appears content with policy rates where they are currently and held no discussion of cutting rates. In our view, calls for rate cuts may be premature. While low inflation should give the Fed cover to stay on hold for 2019, the strong recovery for equity and credit markets, while welcomed, may give the Fed serious pause when considering the need for rate cuts.

The re-imagined bucket list: How to finance your dreams

Did you know this about money management? Current retirees have travel goals, but younger generations are setting investing goals for experiencing new things.