Vince Lombardi, the legendary American football coach once said, “It’s not whether you get knocked down, it’s whether you get up.” We suspect Lombardi would have liked the look of the Health Care sector today—it has taken its fair share of hits over the past year but has kept getting up, shrugging off the blows, and moving forward.

Much of the Health Care focus last year was on the possibility of some iteration of Medicare for All (M4A) legislation being enacted should a progressive Democrat clinch the 2020 U.S. presidential election, as M4A could have seriously impacted operating models of the managed care sector. However, Joe Biden, a more traditional Democrat, is the presumptive nominee for his party, and given his involvement in crafting and ushering through the Affordable Care Act (ACA), which was supportive of private insurance companies playing in the same sandbox as the government, we think the likelihood of M4A rearing its head and rattling the sector has receded.

Also helping the sector has been the arrival of the COVID-19 pandemic which has created an awareness that viruses and diseases have not been eradicated and that companies doing novel research will be able to drive new medical discoveries and can get rewarded for their success. The combination of fading M4A fears and growing optimism over a potential vaccine for treating COVID-19 has provided support for Health Care stocks, with the group outperforming the S&P 500 year to date to become the index’s fourth-best performing sector. 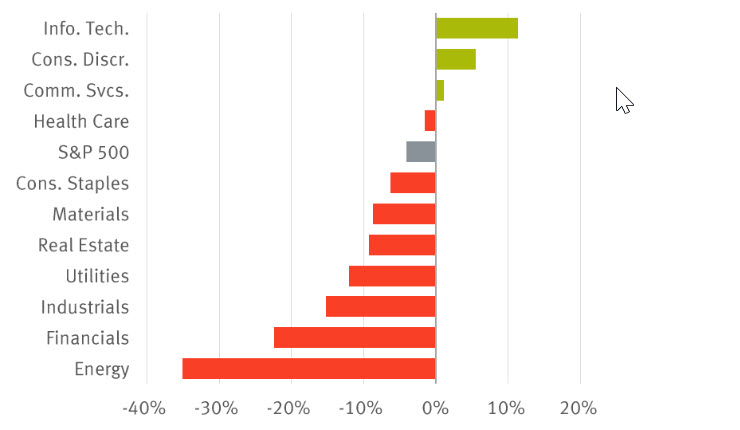 Returns for the Health Care sector have outperformed the S&P 500 year to date.

With the election less than four months away, politicians may start shifting their attention and begin addressing the rising costs of prescription drugs, a topic of importance to the American electorate. In the 2015–2016 election cycle the Health Care sector was volatile as all three leading presidential candidates made drug pricing a focus of their platforms following the notorious 5,000 percent retail price increase for the anti-parasitic drug, Daraprim. At the time (July 2015), the NASDAQ Biotechnology Index was at an all-time high before selling off on fears legislation would be introduced to cut and/or cap drug prices. Donald Trump won the election but his promise to provide drug price relief never materialized as legislation. 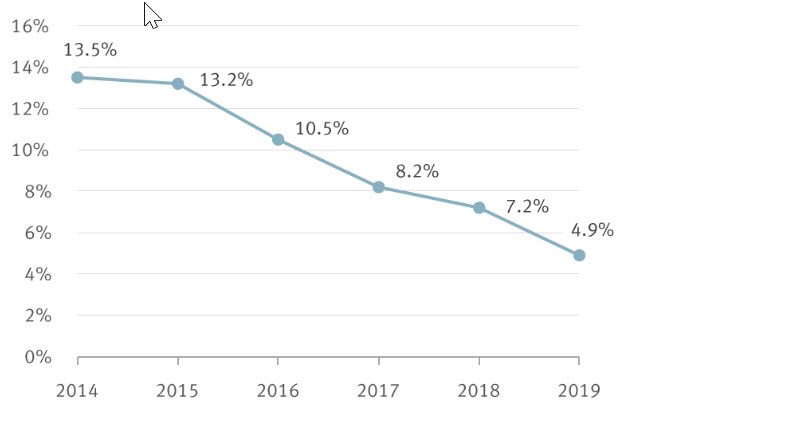 Take two pills and call me in the morning

Over the past five years the pharmaceutical industry has acknowledged the concerns raised by elected officials, regulators, and patient advocacy groups. While list prices of drugs continue to rise, the annual pace of increases has moderated somewhat as a number of companies have attempted to keep prices in check. In 2015, the average annual price increase for brand-name drugs in the U.S. was roughly 13 percent, but has decreased each year to about five percent in 2019. We expect the trend to continue.

While initiatives designed to scuttle escalating drug prices are popular across the Democratic and Republican Parties, we don’t anticipate any policies being passed into law this year given the gridlock in Congress and current focus on reopening economies. Nevertheless, we have highlighted the main proposals to address rising drug costs.

Notes: (1) Medicare Part B covers doctors’ services and outpatient care. (2) After passing the House in December largely along party lines, Sen. McConnell (R-Kentucky) declared H.R. 3 “dead on arrival” in the Senate, and the White House has threatened a veto. (3) The Medicare Prescription Drug, Improvement, and Modernization Act (MMA) established a prescription drug benefit under Medicare Part D and prohibited the government from negotiating the price of prescription drugs on behalf of Medicare beneficiaries.

Despite the S&P 500’s impressive roughly 40 percent advance from its March lows, we believe the Health Care sector appears attractively valued relative to the index. The current forward (2021E) price-to-earnings (P/E) multiple for Health Care is roughly 15x, a discount to the S&P 500, while offering reasonable earnings growth compared to other sectors. While the Health Care sector can be volatile in an election year, we believe a number of investment themes exist that are supportive of the sector’s long-term growth prospects regardless of the policy environment.

Enacting meaningful legislation to control drug prices is not a slam dunk even were one political party to control both the White House and Congress given opposing viewpoints held by members of the same party and the health care industry’s previous track record of helping to shape legislation. While we have no insight as to who will win the presidential election, we believe neither a Biden nor a Trump victory would be troublesome for the health care industry or pharmaceuticals in particular. We think a Trump re-election would largely result in status quo (the rate of growth in prices would come down due to political pressure and industry self-regulation). A Biden victory would likely result in the expansion of the ACA coverage to provide uninsured Americans with greater access to prescription drugs, which we believe would offset some of the pricing headwinds.

While we expect prescription drug pricing to be a focus in this election, as it has been in previous election cycles, we believe the headline risks should not be a reason to avoid the Health Care sector as the fundamental outlook remains strong and underpinned by the powerful long-term trends outlined above. With political risks judged to be lower than in past election cycles, we see the sector offering an attractive combination of a below-average P/E ratio and double-digit earnings growth with very little if any exposure to the COVID-19-induced business cycle swings much of the rest of the market may be vulnerable to.