As we launch into another earnings season, if you just focus on the consensus projections, the situation looks dismal—a projected decline of 44 percent year over year in S&P 500 profits, which would rank as the worst plunge since the global financial crisis, and revenues slated to drop almost 12 percent. Profit margins could get squeezed down to their worst levels since late 2009.

The severe consequences of the COVID-19 shutdowns and their aftermath mean that Q2 could turn out to be not just a valley for corporate earnings, but something more akin to the Grand Canyon, and the biggest quarterly decline of the pandemic. 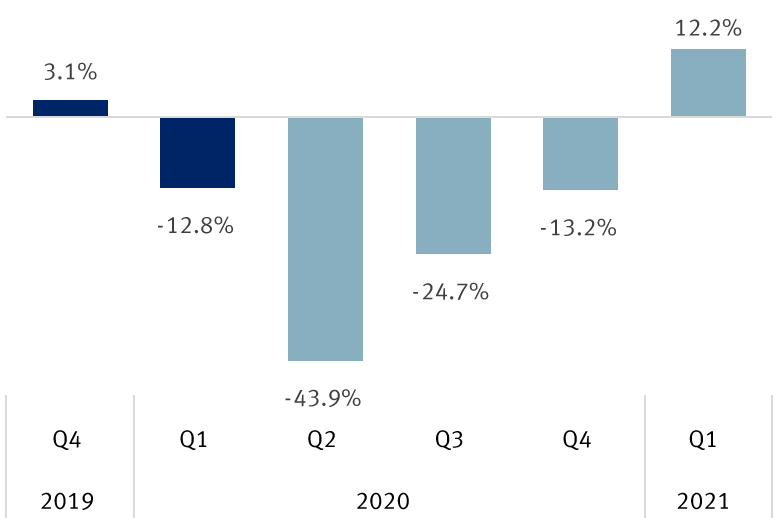 If more companies stumble than usual during Q2 reporting season, the major U.S. indexes would be at risk of pulling back given the market has rallied a long way in a short time. The S&P 500 has jumped 41 percent since the March low, and we think it’s overdue for at least a modest retreat.

RBC Capital Markets, LLC Technical Strategist Bob Dickey wrote, “The rally in the stock market is becoming extended on a short-term basis but the move is not supported by a wider number of stocks, but instead continues to be led by a smaller list of large-cap growth issues … We expect the indexes to test their closest support levels that are around 25,000 on the Dow Industrials and 3,000 on the S&P 500 with a fair possibility of breaking those support numbers.”

Even if the market finally takes a break and pulls back, we don’t think Q2 earnings will meaningfully impact the mid- to long-term trajectory of U.S. stock prices.

Earnings and revenue growth should be “less bad” in the third and fourth quarters, and the year-over-year declines seem set to improve. Earnings breadth—the proportion of S&P 500 companies with year-over-year earnings growth—should also move in the right direction. While only 21 percent are expected to grow earnings in Q2, that figure should improve slightly in Q3 and more so to around 36 percent in Q4, according to Bloomberg Intelligence analysts.

We think the downwardly revised consensus earnings per share forecast of $125 for 2020 has fallen about as much as needed. The estimate now seems achievable.

Better earnings and revenue growth and profit margin expansion should materialize in 2021 as the economy recovers. We still think there is downside risk to the $163 per share consensus forecast for 2021, but it’s getting closer to a reasonable level. RBC Capital Markets is estimating $149 per share. Estimates have the potential to shift in coming months as a clearer view of the economic landscape takes shape. We are comfortable penciling in a range of $149–$155 per share at this stage. 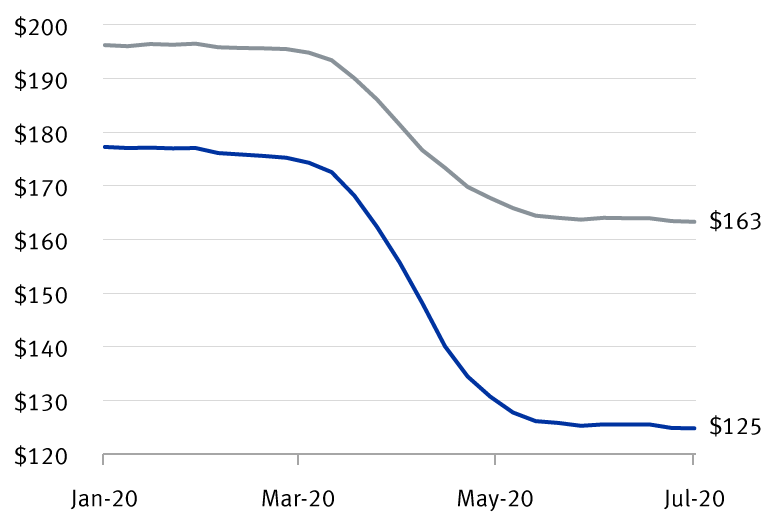 While the economic recovery remains somewhat dependent on the progression of COVID-19 statistics, thus far, the recent infection outbreaks in select states have not prompted severe, widespread shutdowns of economic activity the way the initial spread of the virus did back in the latter half of March and into April.

Regardless of COVID-19 trends, the recession’s duration should be significantly shorter than the contraction that occurred during the global financial crisis. This recession was caused by a unique, transitory health crisis, rather than by severe stress within the financial system. Fiscal and monetary stimulus measures have also been unleased much more quickly and with far greater force.

But we remain skeptical about the potential for the U.S. equity market to push much higher in the near term. It seems like the major indexes are assuming the timing of the earnings and economic recoveries will be even faster than is plausible to us.

Lean against the risks

We think investors should look past the Q2 profits canyon and focus more on the pace and shape of the economic recovery and the trend in 2021 earnings estimates to determine whether the market has the capacity to grow into its rich valuation. Based on our estimated potential earnings range of $149–$155 per share for 2021, the market’s price-to-earnings ratio stands at 20.3x–21.2x—a lofty zone.

Given this stretched valuation, the market’s big move since March, and the lingering economic risks, we remain comfortable holding a moderately Underweight position in U.S. equities for the time being, with an eye toward becoming more constructive if a pullback materializes.