Over the past few months, the deaths of Black Americans like George Floyd and Breonna Taylor, and the shooting of Jacob Blake, have illuminated the pervasive racism that still exists in the country. Protests decrying that racism have, in some cases, turned violent, leaving destruction in their wake.

In the Twin Cities area, where Floyd was killed, community centers, banks, restaurants, shopping centers, grocery stores and other family- and minority-owned businesses in Minneapolis, St. Paul and other parts of the metro, were burned or looted. The destruction of grocery stores and markets in particular created food deserts in low-income neighborhoods, exacerbating hardships for many communities already suffering due to the COVID-19 pandemic.

Like many others across the country, RBC Wealth Management-U.S. employees in and around Minneapolis, where the firm is headquartered, watched events unfold with feelings of grief, anger and sadness.

For the firm's 1,600 employees in Minnesota, says Tom Sagissor, president of RBC Wealth Management-U.S., the events hit close to home.

"Many of us struggled to put what was happening into words," he says.

In the weeks and months following Floyd's death, protests against his killing, against the killing and shooting of other Black Americans, and against anti-Black racism spread throughout the country and the world, spurring essential conversations about how systemic racism continues to be ingrained in our society.

At RBC, leaders announced several measures to address the issue, starting with providing resources and programs for employees to have those important, and difficult, conversations around race and racism. The firm also enhanced its diversity training programs and expanded staffing or hiring goals to increase representation of Black, Indigenous, or people of color employees and leaders.

In the community, RBC committed $100 million over five years in small business loans to Black entrepreneurs. The firm also made financial commitments to local nonprofits and charities helping to rebuild the impacted communities, as well as organizations fighting racial and economic injustice.

In the United States, RBC Wealth Management committed a total of $250,000 to:

City National Bank, an RBC company, along with its colleagues and the Goldsmith Family Foundation, led by City National Chairman Russell Goldsmith, also donated a total of $360,000 to the NAACP Legal Defense and Education Fund and the Equal Justice Initiative.

And in Canada, RBC supplemented those donations with a $1.5 million commitment to organizations with similar missions and objectives.

"We knew that in order to move forward, sustained action would be needed," Sagissor says. "Financial contributions are important, but they're just one part of our commitment to helping the communities where we live and work rebuild and move forward."

In the days and weeks after Floyd's death, as Minneapolis and the Twin Cities started to rebuild and heal, RBC Wealth Management employees looked for opportunities to help.

Matt Boardman, head of Fixed Income at RBC Wealth Management, is based in the New York City area and oversees a team that's spread among Minneapolis and five other locations. Even though 40 percent of the team is located outside of the Twin Cities, Boardman says, "Minneapolis is home for all of our traders. The events affected us all deeply. Not just the tragedy of the killing, but what happened afterwards."

Boardman and his team decided to hold a fundraiser to support We Love Lake Street, and in just 48 hours, 50 team members raised more than $18,000.

"Minneapolis is our home," says Nicole Dunham, Fixed Income Business Development manager. "There was a desire to want to support our community."

Employees also collected supplies for, or volunteered with, the many Twin Cities-area nonprofits and charities providing food or necessities to neighborhoods affected by the destruction. Even in the midst of the COVID-19 pandemic, the employees were among hundreds of other Twin Cities residents that helped clean up and support their community at a challenging time. 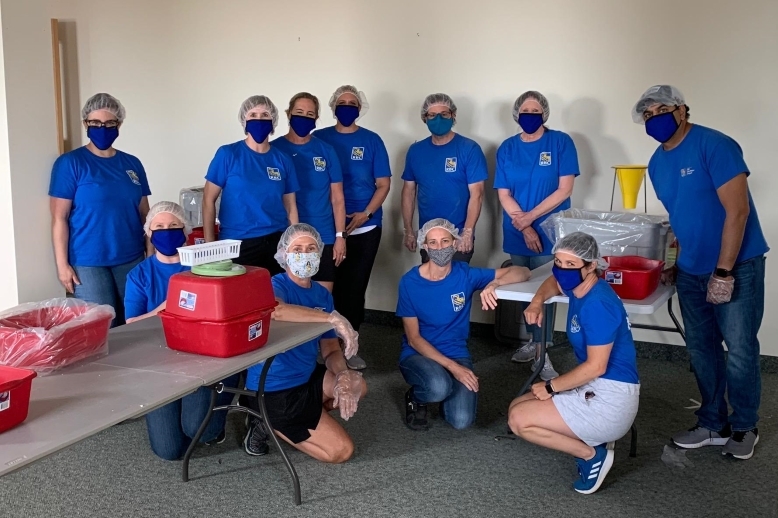 Employees help pack meals with HarvestPack, which were distributed to food banks in the Twin Cities area.

Brian Boyer, manager of internal technology training at RBC Wealth Management, was biking around south Minneapolis in the days after the unrest when he came across volunteers and organizations working to clean up the community.

"I'd say, 'Hey, what do you need?'" says Boyer, who would then set off in search of the items to bring back to the helpers.

Boyer spent many hours biking around the city, tracking down items like medical supplies, food, water and more. As his friends and family learned about what he was doing, people started dropping supplies off at his home, which he'd then load up in his bike trailer for distributing to organizations helping to rebuild the community.

That swell of support led Boyer and his wife to officially create a nonprofit called Bikes & Bites to continue the mission of delivering supplies via bike throughout the summer and beyond. And it's not just Boyer doing the biking anymore - at a recent event in August, he was joined by 25 other cyclists who wanted to help.

"It's easy for you to get passionate about something, but what's been so surprising is how many other people also care so strongly about helping their community like this," Boyer says. "And this need isn't going to go away. We plan for this to be an organization for years going forward."

After hearing about Boyer's efforts, RBC Wealth Management employees stepped up to help. In one case, employees with the Advisor Recruiting team held a donation drive to collect items for Bikes & Bites, which they delivered to Boyer's home for donating around the area.

And that's just one example of employees supporting local efforts to help the Twin Cities community. In early June, the Marketing and Advisor Recruiting departments raised $1,300 for purchasing supplies for YouthLink, a nonprofit serving homeless young adults between the ages of 16-24 across the Twin Cities. 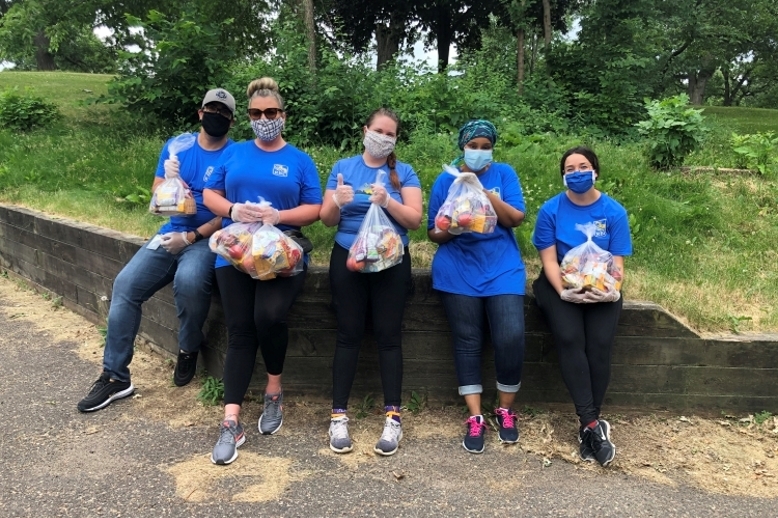 Additionally, employees with the firm's Operations department helped distribute food donations with a nonprofit called Keystone Community Services. The volunteers unloaded trucks of non-perishable food donations, separated and categorized the items in boxes, and loaded the boxes back up into trucks for delivering to a food shelf.

“We knew there was a major need for resources in our community," says Cost Basis Team Lead Becky Bunkholt. “Food is an essential item that many in the community need, especially now, and we wanted to be able to help in any way we can."

At home with RBC: Golf tips from Team RBC

There may never be a more critical time in history for companies to provide benefits that allow women to keep working.