Markets have largely looked through impeachment proceedings this week as they have little bearing on near-term policy, while President-elect Joe Biden appears set to propose a $2 trillion pandemic aid package, more than double most expectations, also helping markets look past some mixed economic data this week, including a spike in jobless claims.

As a result, the benchmark 10-year Treasury yield finally cracked the one percent level for the first time since last March in the aftermath of the U.S. Senate runoff elections in Georgia, as a unified government and prospects for further fiscal aid have boosted the growth and inflation outlook, with the latter receiving intensified focus of late.

Market-based inflation expectations have recovered sharply from the pandemic lows, even slightly exceeding the Fed’s two percent average inflation target. But this is simply in line with more normal levels, and there are few indications the market is seeing runaway inflation anywhere in the pipeline. 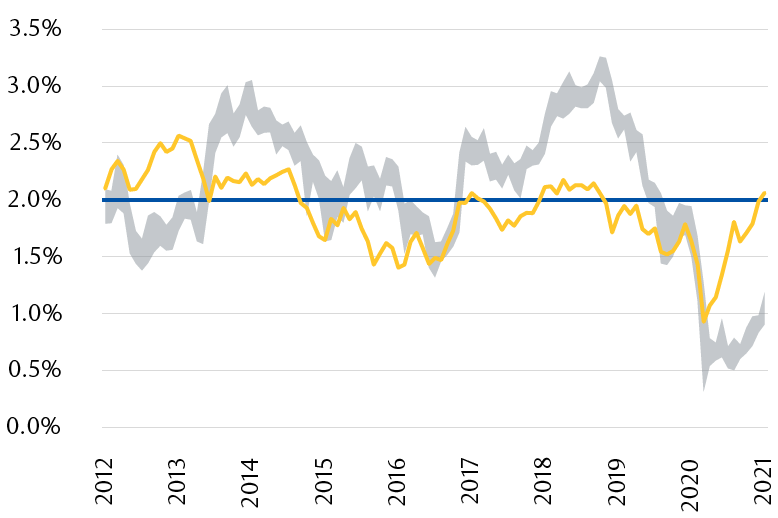 But that may be put to the test in the coming months. Due to simple math, inflation in Q2 this year will likely surge above two percent when compared to Q2 of 2020, but that’s only because the base will be so low following price declines during the onset of the pandemic. Importantly, this won’t be any cause for the Fed to dial back its accommodative policy. As Fed Chair Jerome Powell stated on Jan. 14, the “public will need to see two percent inflation for some time.” Sustained inflation is simply reflective of a healthy economy operating at capacity with full employment. With elevated unemployment levels and a full economic recovery still years away, we believe the Fed will very likely maintain its current policy stance.

Where previously we saw the 10-year Treasury yield rising to 1.25 percent this year on a gradual recovery, we now see scope for it to rise to 1.50 percent, with perhaps even a slight bias to the upside from there following the Senate runoffs. To be sure, not markedly higher, but higher still.

Yet higher yields typically translate to poor bond returns as prices fall when yields rise. The question then is whether prices fall to such an extent that they wipe out the coupons earned over the course of the year. The breakeven yield levels by Dec. 31, 2021, or the level above which yields would have to rise for returns to turn negative, for major U.S. sectors this year are:

Is the bottom in for U.S. mortgage rates?

While the outlook is a challenging one for investors, the flip-side is that it’s a great one for borrowers, in our view. Record-low mortgage rates, and subsequent refinancing, remain one of the best ways for the Fed, via policy rates, to put money directly into the pockets of consumers.

Since peaking near five percent in late 2018, U.S. 30-year mortgage rates have been in a steady state of decline. But since last April that decline has gathered pace, setting fresh record lows nearly every week along the way, culminating with an all-time low of just 2.65 percent on Jan. 7, based on data back to 1971. Perhaps some reading this will remember the days of double-digit mortgage rates from the 1980s. But fear not, those days are over.

Gauging the outlook for mortgage rates is actually quite simple as they are highly correlated with Treasury yields; simply take the 10-year Treasury yield and tack on 1.75 percent, which is the average spread over the past 25 years. So if we are right and the 10-year Treasury yield moves toward 1.50 percent over the course of 2021, we would expect that U.S. mortgage rates would rise to a range of roughly three percent to 3.25 percent. Higher sure, but still historically low, and should ultimately mean that housing activity continues to be a positive contributor to the ongoing economic recovery, while we would recommend that those who would benefit from refinancing move to do so at current rates. 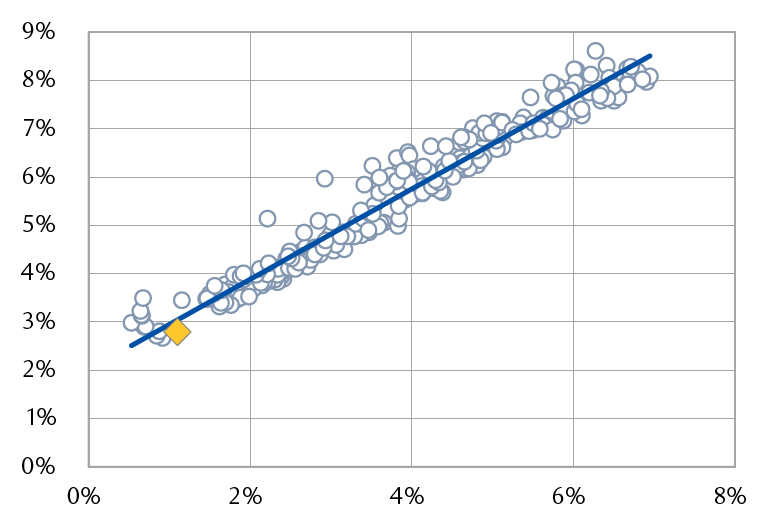 Play defense, with some offense

Following strong total returns for many fixed income sectors in 2020, the outlook for 2021 may appear somewhat bleak, but we think a little pain along the way toward a more normal yield environment would undoubtedly be a welcome tradeoff for most investors.

While 2021 will largely be a year of taking what the market gives you, we would continue to shy modestly away from interest-rate sensitive sectors like Treasuries and investment-grade corporate bonds and would keep exposure to high-yield corporate bonds and preferred shares in line with individual risk tolerances. Treasury Inflation-Protected Securities (TIPS) are often sought out by investors when inflation fears rise, but, in our view, they remain relatively unattractive when market-based expectations are above two percent, as they are now, and they will still be exposed to higher Treasury yields, meaning that returns could still be negative even if inflation rises.