This article is the first in this year’s “U.S. elections & market matters” series, in which RBC Wealth Management will examine the market- and economic-related crosscurrents associated with the 2022 U.S. midterm elections. In this installment, we focus on historical equity market performance surrounding such elections, and what that might be—or might not be—signaling for this year and next.

If the last U.S. midterm election cycle in 2018, which took place in the middle of the Trump administration, was the most anticipated in a generation, the tension surrounding the 2022 midterms on November 8 has the potential to surpass that.

The country is even more politically and ideologically polarized now compared to then, particularly following the 2016 and 2020 presidential elections, January 6 uprising at the Capitol, landmark Supreme Court decisions, increases in crime, disagreements about social values, and the population’s diminished trust in American institutions. And let’s not forget or minimize discontent about inflation and the economy overall.

All of this has resulted in pessimistic attitudes about the direction of the country. While there is a partisan split, even attitudes among Democratic voters have become much gloomier. The proportion of Democrats who say the country is moving in the wrong direction surged from only 22 percent in January 2021 to 72 percent in July 2022, according to an AP-NORC poll. Among all voters, the percentage has increased from 49 percent to 83 percent during the same period.

Percentage who say things are headed in the wrong direction 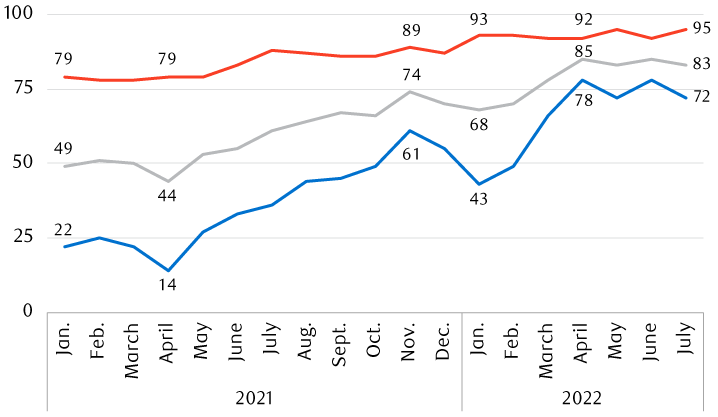 Question: Generally speaking, would you say things in this country are headed in the ...?

For starters, it’s important to consider that the stock market has historically traded in a four-year cycle, and these cycles correspond to election years.

As is typical with historical market data, there was much variation in the returns in the year following the midterms. While the average was a 16.3 percent advance, the lowest return was a decline of 5.2 percent and the highest was a gain of 41.4 percent.

Midterm election years tend to be weak, but the following year is typically strong

S&P 500 performance during election cycles since 1932 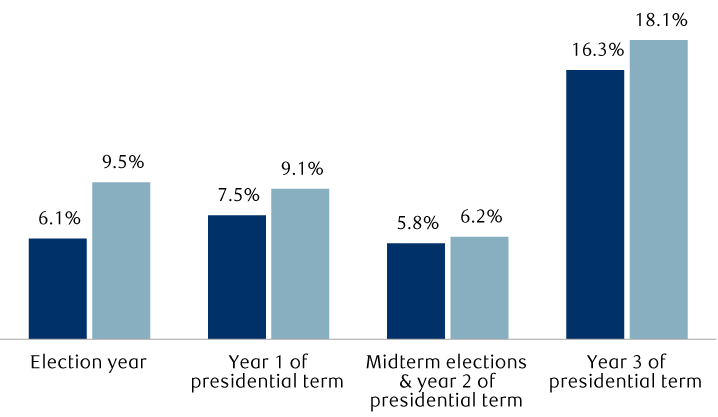 Source - RBC Capital Markets U.S. Equity Strategy, Bloomberg; based on price returns and does not include dividends

Within the four-year cycle there is an important nuance that isn’t captured by the annual performance data—one that is associated with midterm elections.

The historical performance in the period before and after the midterm House and Senate elections is among the most pronounced of the seasonal equity market cycles we track. It has persisted regardless of what is or isn’t occurring in Washington, and regardless of which party was in power or was gaining or losing momentum.

In the 22 periods we examined stretching back to 1934, the S&P 500 typically pulled back or corrected at some point during the 12-month period before the midterm elections. The index declined 20.6 percent, on average. This cycle has been no different, as the S&P 500 corrected 23.6 percent from its January 2022 peak to the June 2022 trough.

Historically, the downside quite often was more than made up for with subsequent rallies. In those 22 instances since 1934, the market was higher at some point in the year after the midterm elections by almost 47 percent on average. Interestingly, it usually reached a peak level in the latter half of that year—often in the fourth quarter. The market was able to exceed its previous high on 77 percent of the 22 occasions. 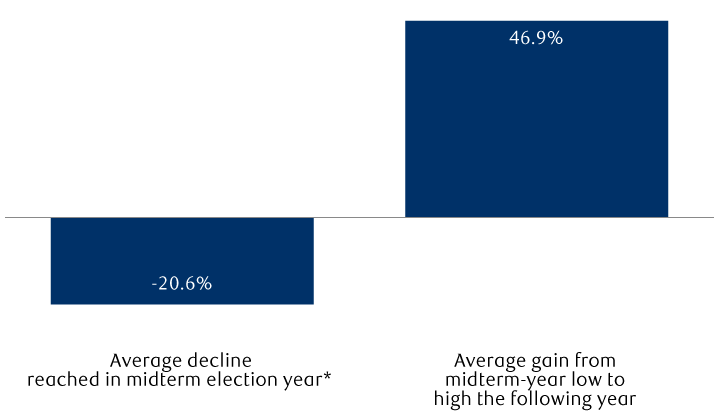 * Measured from the peak within 12 months before the midterm-year low, to that low. In 22 of 23 instances, the low was reached before the midterm election; the exception was in 2018 when it occurred after the election.

However, the nearly 47 percent average rally following the midterm-year low doesn’t tell the full story. The return data that make up the average were rather wide—from 14.7 percent at the low end to 87.1 percent at the high end.

As of this writing, the S&P 500 is up 6.6 percent from the mid-June low. We think there will be additional gains in between now and the end of 2023. But we doubt the market will go up in a straight line and a super-sized rally is by no means guaranteed given the lingering inflation challenges that have yet to be tamed by the Fed and the broader economic headwinds, including elevated recession risks.

It’s notable that during seven previous midterm election periods that were accompanied by inflation challenges, the market reached a new high in the year after the midterm elections less frequently than during non-inflationary periods.

Gridlock can be good

A question that individual investors often ask is, does the market typically do better when a particular party controls Washington?

The short answer is that often the market has welcomed certain forms of gridlock in Washington—otherwise known as split or divided government between the two major parties—but not always.

A study by RBC Capital Markets going back to 1932 found that S&P 500 returns have historically been the highest in three cases:

Returns have historically been somewhat less robust in the case of Democrats controlling the presidency and both chambers of Congress (+10 percent). By contrast, returns have been much more muted with a Republican president and either a split or Democratic-controlled Congress, as the chart shows.

The U.S. market has performed well during periods of divided government 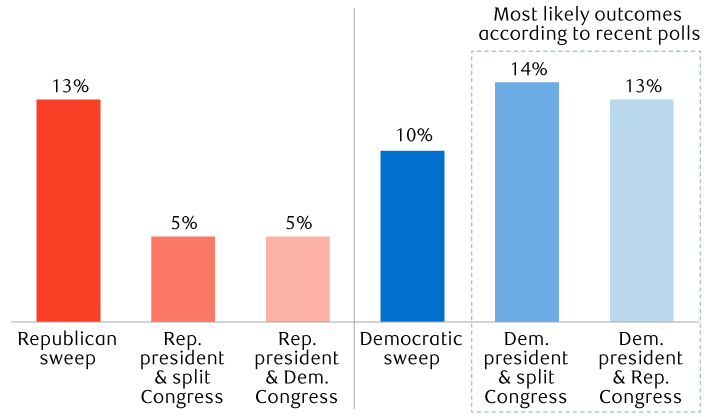 Note: The 2000 election resulted in a 50/50 tie in the Senate, with a Republican vice president acting as the deciding vote after inauguration. However, midway through 2001, one Republican senator left to become an independent and caucus with the Democrats.

Source - RBC Capital Markets U.S. Equity Strategy, Haver Analytics; based on price returns and does not include dividends

Given that recent polls have been forecasting a Republican takeover of the House, and Senate control as too close to call, we think it’s useful to dig a little deeper into historical market returns when congressional control was split between two parties. This scenario is actually less common than one might think in American history. It has occurred in only six of the two-year periods since 1932, with all of those coming after 1980. In other words, a split Congress has been a much more frequent phenomenon in the modern era.

We found that the S&P 500 outperformed in four of the six instances of a split Congress, with three of those periods racking up annualized gains of more than 20 percent. For all six periods, it rose 13.4 percent annualized, on average, compared to an 8.9 percent average annual gain in all years since 1932. 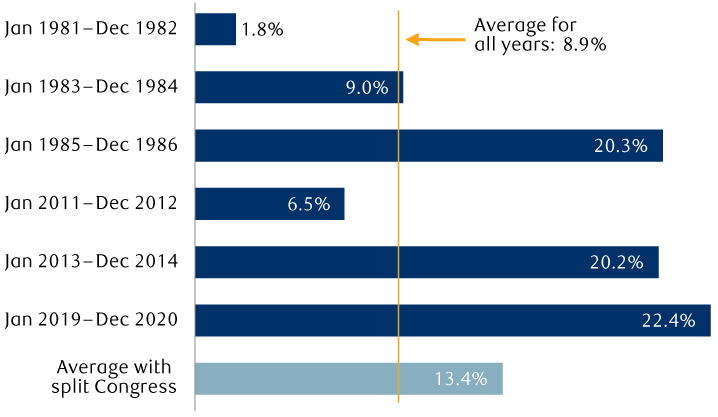 Source - RBC Wealth Management, Bloomberg; based on price returns (does not include dividends); data cover two-year periods that follow both presidential and midterm elections; annual average from 1932 through 2020

Fundamentally, it comes down to fundamentals

If history is a guide, the past performance surrounding midterm elections and the potential for gridlock in Washington following the November 8 vote could bode well for the market. The data demonstrate there are indeed market performance patterns associated with election years that we believe are worth paying attention to and respecting, especially those that surround midterm elections.

But investors should keep in mind that elections are not the only or even the main drivers of U.S. stock prices. We think market performance actually has greater linkages to the Fed’s monetary policy decisions, the ebb-and-flow of the economy, and related corporate earnings trends than it does to actions that emanate from the White House and Capitol Hill. These factors are currently in flux, which is why we think the market has been volatile recently.

It’s prudent to keep the compass pointed toward domestic economic fundamentals, and specifically to the path of forward-looking recession indicators—especially given the current uncertainties. We believe recessions and the corresponding movements of corporate profits matter more to investment returns than political party control in Washington. Recessions are usually responsible for ushering in equity bear markets. Then during periods of economic duress—often when headlines are at their worst and investor sentiment is rather negative—early hints of economic green shoots typically spark new bull market cycles even before recessions end.