Recent yield curve inversions have sparked recession fears. Now the fear is that fear itself will spark a recession.

Attempting to predict or forecast the exact timing of recessions is a largely pointless exercise. The simple fact is that the U.S. economy has only been in recession about 15% of the time in the post-war era, and as the old saying goes: economists have successfully predicted nine of the last five recessions. So while our goal is not to attempt such a feat, it is fair to say that recession risks have risen materially in recent months, and therefore it’s only prudent to remain vigilant and to begin establishing a framework for thinking about portfolio positioning and asset allocation decisions.

While various economic and market data points have raised concerns in recent weeks, the latest fear is that fear itself may cause a recession. With all of the headlines and media coverage centered on recession fears, there’s the risk that it could become a self-fulfilling prophecy—particularly as it relates to consumer sentiment—as consumers may be inclined to rein in spending, further perpetuating any economic weakness.

So are there signs that recession fears are beginning to creep into the consumer psyche? The chart depicts Google Trends data that suggests the recent yield curve inversion has captured the imagination of the U.S. public as the search frequency for “recession” has jumped near the peak levels seen just prior to the beginning of the 2007 recession, while the preliminary estimate of consumer confidence in the University of Michigan survey for August showed the lowest level since January. 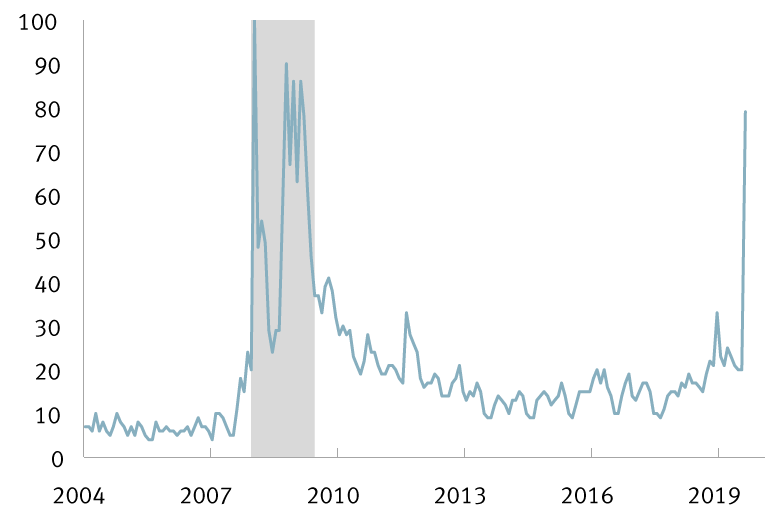 Of course, it is not lost on us that by writing about potential recession risks, we may only be contributing to the problem, but consumer sentiment is not at the top of our list of concerns, as the incoming data and the ongoing trade war may be enough alone to tip the growth scales.

An economy is only as strong as its weakest link

Those who see little risk of a recession on the horizon—which we concede remains the base case—often cite robust personal consumption and still-strong labor markets as reasons to believe that the U.S. consumer remains well positioned to carry the economic load amid weakness elsewhere.

But as the chart shows, that may not be enough, and may even be irrelevant. The data has been mixed during recessions dating back to 1960 as the contribution from consumer spending has actually been positive during nearly half of those recessions. The one thing they all have in common is a sharp contraction in private domestic investment, and the data for the first estimate of Q2 GDP showed that despite strong consumer spending, investment is declining amid the ongoing global trade war and the subsequent uncertainty. Data released during the week showed that the clouds over manufacturing and business investment may only be darkening.

Recessions have occurred even with positive contributions from consumers

Average of quarterly contributions to GDP during official NBER recessions 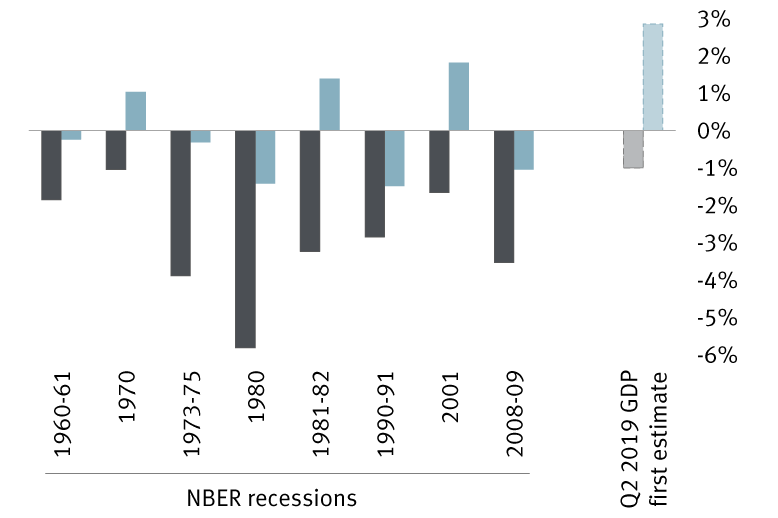 Manufacturing sentiment, according to the flash estimate of the Markit U.S. Manufacturing Purchasing Managers’ Index for August, fell below the key level of 50 that separates expansion and contraction, slipping to 49.9, for the first time since 2009. The risk that recession worries begin to have actual impact on consumers is something to watch, but the trade skirmish with China remains one of the biggest impediments to global economic growth.

Hope for the best, prepare for the worst

All eyes remain on the Fed, as there remains little hope of any sort of resolution on the trade front with China in the near term. Markets will key in on Fed Chair Jerome Powell’s August 23 speech at the Jackson Hole Symposium, an event that central bankers have used in the past to signal significant shifts in monetary policy plans.

However, early comments from other Fed officials, and in the minutes of the Fed’s July 31 meeting released on August 21, give us little reason to believe that the Fed is ready to get aggressive in order to get ahead of the curve in terms of a potential economic slowdown. Philadelphia Fed President Patrick Harker, a centrist at the Fed and a non-voter this year, stated in an interview that he sees no urgency to take further action after the July rate cut, “I think we should stay here for a while and see how things play out.”

While another 0.25% rate cut is all but guaranteed in September according to market expectations, yield curves remain inverted, an ongoing sign that markets believe that the Fed’s current monetary policy stance is far too restrictive amid an increasingly gloomy economic outlook. We continue to expect a series of rate cuts through the end of the year, but we fear that the Fed is moving too slowly.

As it stands, we remain Market Weight both equities and fixed income for the U.S. and globally, but maintain relatively defensive positioning within each asset class. It may remain the case that the only thing we have to fear is fear itself, but there are also some other things to fear. While the strength of U.S. consumers should provide some comfort, consumer confidence can be a fickle thing. The fact is that the primary worry about trade wars was not necessarily the tariffs themselves, but the duration that any skirmish might last. As the trade war edges closer to its second anniversary, it’s becoming increasingly clear that economic damage is being done.

RBC is proud to support the remarkable nonprofit organizations that are fighting for children to reach their full potential. Learn more about the impact they are making.

Did you know this about money management? It’s important to start retirement planning early.