With more spending likely coming from Washington on traditional infrastructure, social programs, and climate initiatives—on top of trillions in COVID-19 relief and many years of bipartisan deficit spending—the ramifications of ever-increasing federal debt are on the minds of investors.

Our view about this uncomfortable topic hasn’t changed since we wrote about it late last year: The more that debt mounts over the longer term, and the more that the debt-to-GDP ratio continues to rise, the more the U.S. government and taxpayers will enter uncharted territory. It’s unclear to us where the tipping point is between manageable and unmanageable debt loads. So far, markets are behaving as though any tipping point is a long way off.

The federal debt burden has risen since the Great Recession, and is projected to surge after 2030

U.S. federal debt held by the public as a % of GDP (actual and projected) 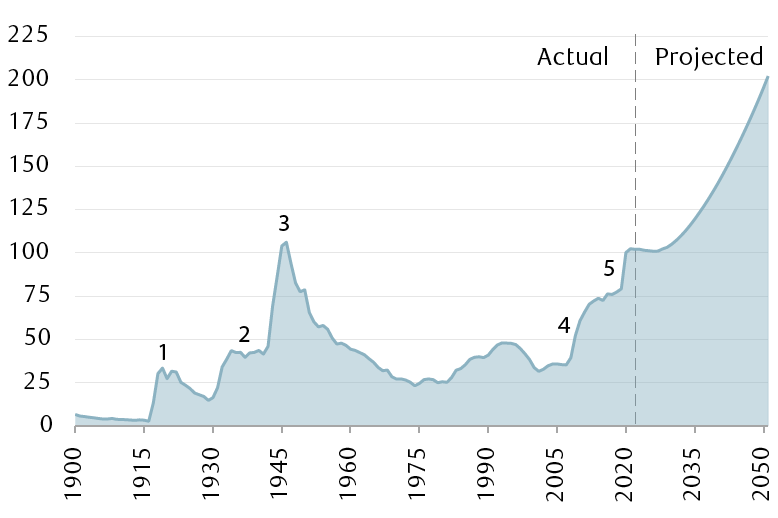 The line chart shows the history of the federal debt as a percentage of Gross Domestic Product going back to the year 1900 and the projected level out to 2050. In the preceding 120 years, debt-to-GDP briefly peaked just above 100% right after World War II ended. It declined meaningfully over subsequent decades to roughly 20% by 1975. However, following the Great Recession and due to the COVID-19 pandemic, debt-to-GDP has risen to about 100% again. The Congressional Budget Office forecasts it will begin to steadily surge starting around 2030, rising to 200% by 2050.

There are numerous risks associated with high debt loads, which we address below. But it’s important to consider those risks are unlikely to manifest in the near term—or even this decade, primarily because the interest costs associated with servicing the federal debt are relatively low and manageable.

Debt servicing costs actually declined last year, despite total outstanding debt surging higher due to COVID-19 spending, because a portion of the debt was refinanced. There are still government bonds carrying much higher coupons that are maturing and being refinanced at today’s ultralow rates. This is akin to refinancing a mortgage at a lower interest rate—the monthly payment decreases.

The Congressional Budget Office (CBO), tasked with monitoring and reporting on the deficit and long-term debt, among its other duties, forecasts that debt servicing costs are set to remain low for much of this decade.

While the CBO’s latest debt projections, from March of this year, factor in trillions in COVID-19 spending, they don’t include trillions in new spending Washington is contemplating for infrastructure, social programs, and climate initiatives. Because of this additional spending, we think deficits would increase beyond the CBO’s latest projections—at least to some degree—despite the “pay-fors” (revenue offsets) that are included and economic stimulus that should result.

Regardless of the final price tag for these new spending initiatives—it’s increasingly looking like it will be lower than the roughly $4.5 trillion on the table now—the federal debt burden has the potential to deteriorate and become problematic after 2030 unless Washington changes its ways.

As the charts show, the CBO projects interest costs will become a much higher share of the annual deficit and will rise meaningfully as a proportion of GDP. (The CBO’s projections are highly dependent on its interest rate and GDP assumptions: 10-year Treasury yield averages 3.0 percent from 2026 through 2031, rising steadily thereafter reaching 4.9 percent by 2051. GDP growth averages 1.6 percent from 2021 through 2051.)

U.S. annual federal deficit by category as a % of GDP (actual and projected) 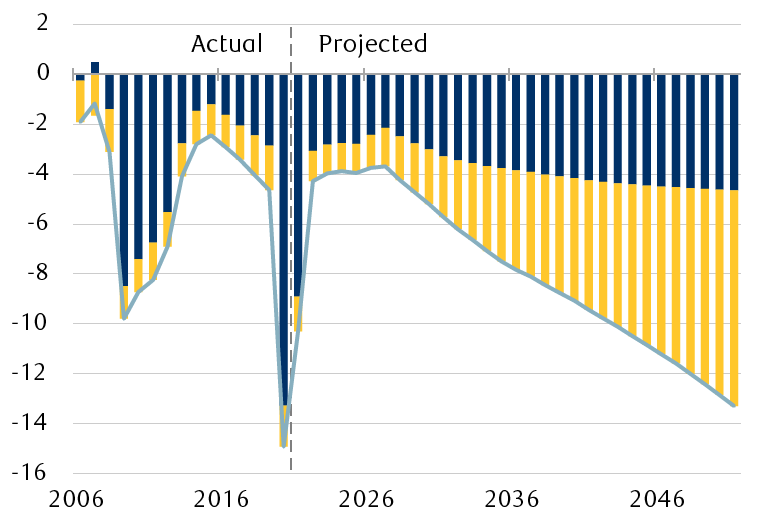 The chart shows the primary annual U.S. federal budget deficit (the amount of spending that exceeds revenues) and the associated costs on maintaining the federal debt load, along with both costs combined. Currently, interest costs are very low. The Congressional Budget Office projects they will start rising steading around 2030, and forecasts interest costs will make up a much greater share of the annual deficit by 2051, outpacing the primary deficit.

U.S. federal outlays by component category as a % of GDP (actual and projected) 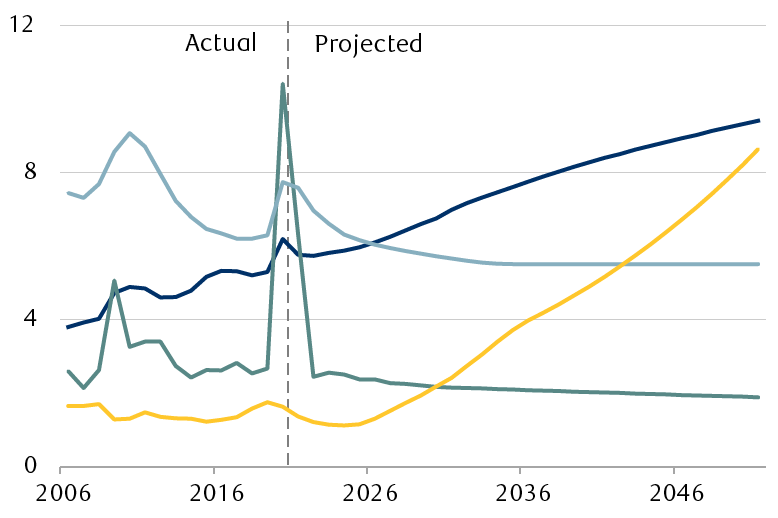 The line chart shows four major categories of U.S. federal outlays as a percentage of Gross Domestic Product on a historical basis going back to 2006 and on a projected basis going forward to 2051. The category of major health care programs is expected to rise steadily from just under 6% currently to over 9% by 2050. Discretionary spending is projected to come down during the same period from roughly 7% to under 6%. The other mandatory spending category is expected to come down notably (this is the category that has been impacted the most by COVID-19 relief) from over 9% to just under 2%. The biggest increase is expected to come from net interest expense (the cost of financing the federal debt). It is expected to rise from about 1.5% to more than 8% by 2051.

Following are the potential long-term consequences of the ever-increasing federal debt load that we think are most likely to unfold:

There are additional, long-term debt-related risks the CBO lists in its analysis such as the loss of confidence in the dollar as the world’s reserve currency; the potential for difficulty in financing debt in international markets, which could lead to higher interest rates and expense; inflationary pressures; and a fiscal crisis. However, the CBO acknowledges that financial markets are not currently sending signals these risks are of concern.

From a pure “balance sheet” perspective, we believe higher federal debt loads are manageable in the near and intermediate term, but pose longer-term threats. At a minimum, the debt dilemma is a powerful incentive for policymakers to further suppress interest rates. This is a key reason we recommend investors consider strategies for a low interest rate environment that may linger for much longer than one might think is reasonable.

FinTech and the future of finance

The convergence of finance and technology can help make economic growth sustainable by empowering unbanked populations.