Away from the ongoing concerns about the stalemate over a second fiscal stimulus package in the U.S., and rising COVID-19 cases globally that are driving another round of targeted lockdowns, risks and concerns around inflation remain the one constant that is seemingly front and center in the minds of investors. Despite a decade-plus of below-par inflation around much of the world, rising deficits, enormous numbers around fiscal spending, and efforts by central banks may rightly justify such fears, but we maintain our view that inflation is not a near- or intermediate-term problem for fixed income investors.

And perhaps these fears are only amplified by global yields that remain near historically low levels. The margin for error is simply lower than it ever has been as it doesn’t take much in the way of inflation to begin eating away at those returns.

There are other forces at work in this world

In the U.S., this week saw the release of a wide swath of price data from consumers to producers, along with qualitative surveys on pricing pressures, with the key takeaway being that there simply doesn’t appear to be inflationary forces in the pipeline.

The first chart attempts to capture recent price trends for key categories within the consumer price index (CPI). As many might suspect, food prices—both at and away from home—are running at the hottest levels of the past five years. Used car prices have skyrocketed over the past few months, accelerating to 10.3 percent year over year in the September report, not just the fastest pace in recent memory, but the fastest since the 1960s. A lack of supply has been the primary culprit as weak new car sales due to production disruptions has meant that fewer used vehicles are being traded in. In fact, excluding used vehicles from the September CPI report would have shown that consumer prices actually fell slightly in September, as opposed to the 0.2 percent reported increase. 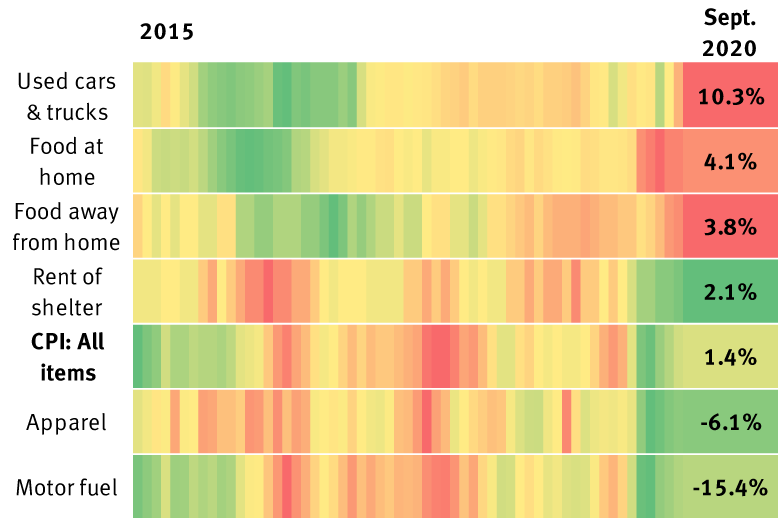 But those components are relatively minor in the CPI. Food spending comprises about 14 percent, with used vehicles, apparel, and motor fuel accounting for approximately 2.7 percent each. The largest component, rent and housing expense, which accounts for about 33 percent of the CPI index, has seen a marked deceleration in the aftermath of the pandemic, slowing to a 2.1 percent pace year over year, down from north of three percent last year. Yes, housing prices are on the ascent largely due to increased work-from-home demand, but high unemployment and the ongoing economic disruption will likely continue to drag that component lower.

As Tom Porcelli, RBC Capital Markets, LLC chief U.S. economist recently stated: “It bears repeating for those folks that think much higher inflation is upon us: It is hard to build the case for much firmer and persistent core inflation when goods prices are being suppressed by global forces.” RBC Economics forecasts both headline and core (excluding food and energy) inflation at just 1.7 percent next year, still far below the Fed’s two percent objective, and only flat from the inflation rate expected this year.

Additionally, for all of the stimulus—or perhaps maintenance—spending thus far, much of it may not be making its way into the economy. A recent New York Fed survey found that U.S. households spent just eight percent on non-essentials and only 18 percent on essentials, with roughly 35 percent each going to savings and to pay down debts, and the remaining four percent used for charitable donations. And consumers expect to spend an even smaller amount should there be a second round of stimulus, with 45 percent of any check expected to be targeted toward savings. It appears that the risks of higher inflation driven from the demand side will remain suppressed, while producer price data also released this week showed core prices rising just 1.2 percent year over year.

While higher inflation risks eat away at current income and savings, investors also tend to harbor fears about a spike in interest rates that push bond prices down. But this week served as yet another reminder that the gravitational pull of global yields remains firmly to the downside. 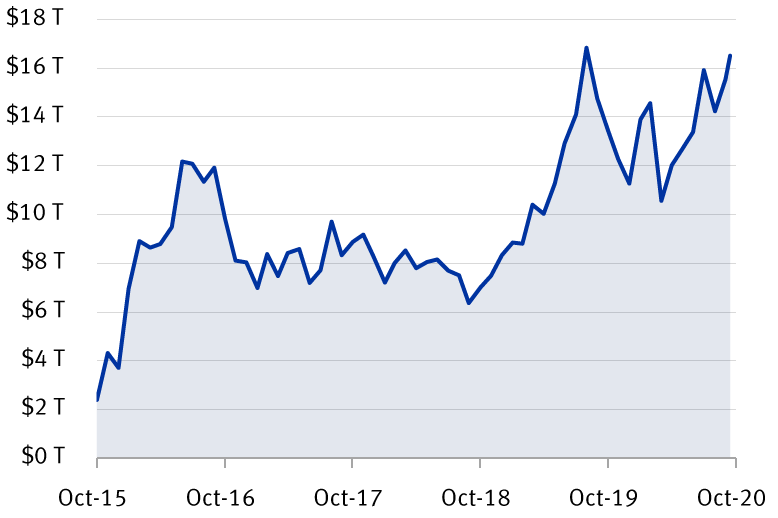 Chart showing global total amount of negative-yielding debt from 2015 to October 2020. The current value is slightly over $16 trillion, which is near the previous record high reached in 2019.

As the chart above shows, the global stock of negative-yielding debt has jumped, once again approaching fresh record highs in the process, as European Central Bank officials signaled over the weekend the need to do more to battle persistently low inflation, including the option of taking policy rates deeper into negative territory. At the same time, Bank of England officials surveyed banks about operational readiness should negative rates be implemented, though we continue to believe there is a relatively low likelihood of that tool being used in the near term. And it remains the case that we see almost no likelihood of negative rates in the U.S.

For U.S. investors, while we think another fiscal stimulus package would go a long way toward supporting the economic recovery, and potentially moving yields modestly higher, low inflation and global dynamics will almost certainly be offsetting factors. The net result may be that yields are stuck around current levels for the time being. Cash continues to yield nothing, and we remain in favor of putting money to work, while looking for potential volatility around the U.S. presidential election to get active in a low-yield environment.