Sovereign yields, in the U.S. and globally, have largely remained stagnant since the March lows, struggling to move materially higher. But November was supposed to bring a number of catalysts, particularly in the U.S., that had the potential to change that.

Two of those major catalysts to higher yields: the prospects for fiscal expansion on presidential election results, and positive developments on the COVID-19 vaccine front are now seemingly priced out of the market, and mostly into the market, respectively. Not only has the benchmark U.S. 10-year Treasury yield failed to break above the key one percent level for what would be the first time since March, it has pulled back to some of the lowest levels seen in recent weeks.

The first chart shows that the path to higher yields is still expected to be a slow and arduous process. These forecasts, comprising approximately 50 analysts and compiled by Bloomberg in early November, at best incorporate some of the election and vaccine outcomes, but given how markets have reacted since, we suspect they would be little-changed at this point. The 10-year yield is first seen breaching one percent by the middle of next year, and only rising to around 1.5% by the end of 2022. Although COVID-19’s onset took just two months to drive the 10-year Treasury yield sharply below 1.5%, it could take more than two years to get back to that level. 30-year Treasury yields are also expected to trend higher on improving growth and inflation expectations.

With few catalysts left on the horizon, the rate outlook remains subdued 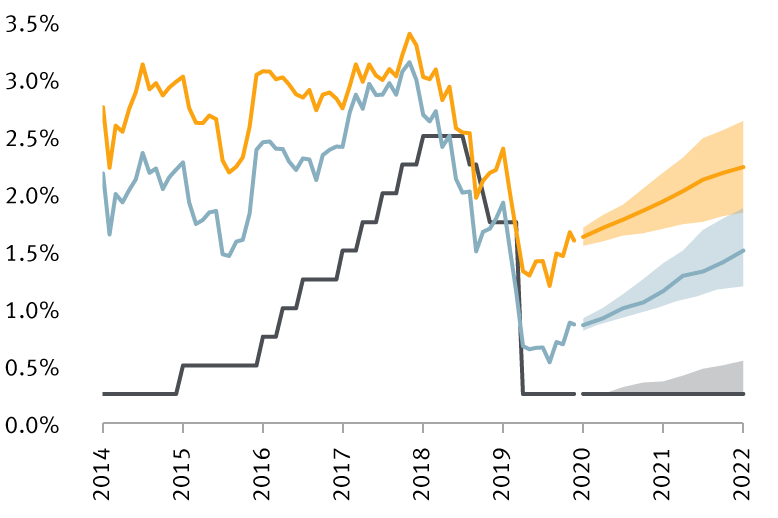 Of course, these being forecasts and all, the only thing we can say for certain is that they will likely be wrong. However, while analysts perennially forecast higher rates ahead despite decades of declines, we think this is broadly how investors should think about the path forward and at the early stage of an economic recovery.

On the fiscal support front, a split Congress next year limits the scope for further fiscal aid—though markets won’t know the final makeup of the Senate until the Jan. 5, 2021, runoff elections for two Senate seats in Georgia. The base case is that Republicans will retain control. Should those two seats flip to the Democratic candidates, markets would likely rapidly reprice fiscal stimulus prospects, and higher yields as a result. All told, political gridlock is the base case and in this type of environment where economic and public health uncertainty remains elevated, it is only likely to also lead to gridlock on the yield front.

While the multiple positive developments on a vaccine are good for markets, though obviously far more important from a public health perspective, we think it remains a longer-term process that puts any potential return to “normalcy” 12–18 months out, which may be why Treasury yields have only had a moderate reaction on the news.

Finally, if the last rate hike cycle was gradual, we think the next one will be glacial. While a few analysts have rate hikes penciled in, without fiscal support, the burden of the economic recovery will once again fall upon the Fed, and that only means lower policy rates for longer. We maintain our view that even in the most optimistic scenarios, the Fed will keep policy rates at the current 0%–0.25% until 2023 at the earliest.

A November to remember

While our view is there are now few, if any, catalysts ahead that could spark higher yields, which is one less thing for investors to worry about, it also means the fixed income investing landscape will be a challenging one in the months and years ahead.

The combination of low Treasury yields, and the subsequent hunt for yield, combined with fading policy uncertainty on the election outcomes, has driven yields in many sectors to fresh all-time lows. The Bloomberg Barclays US Corporate High Yield Index set a new record low of just 4.56% on Nov. 9, eclipsing the previous low of 4.83% from 2014. It was a similar story for emerging market debt, where the Bloomberg Barclays Emerging Market USD Aggregate yield declined more than 0.30% to a new record low of just 3.78%. We reduced our outlook for both sectors back toward Neutral from Overweight, but in a lower for longer interest rate environment, we remain positive on the outlook for preferred shares as a way to add income to portfolios.

While we think the importance of the Fed’s corporate bond buying facility has been overstated, particularly as it relates to the recent and ongoing rallies in credit markets, as the corporate bond facility still stands at just $15 billion compared to total potential size of $750 billion, some politicians are already calling for the facilities to be shut down as they feel market functioning has returned to “normal.” But as Fed Chair Jerome Powell said this week, “When the right time comes, and I don’t think that time is yet or very soon, we will put those tools away.”

What does the Fed own? 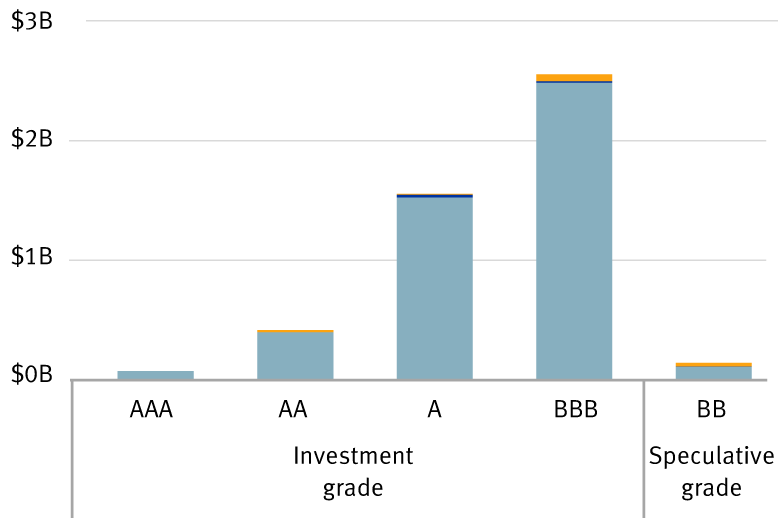 Nearly all of the Fed’s emergency facilities are set to expire at year end, with the Fed needing the approval of the Treasury Secretary for extension. Thus far, current Treasury Secretary Steven Mnuchin hasn’t signaled his support one way or the other, while the lack of transition coordination with the Biden administration may cause uncertainty with respect to the fate of the Fed facilities. For credit investors, and markets generally, this could be a source of volatility. They remain important backstops for markets should bouts of illiquidity occur, even if the Fed’s current activity in corporate bond markets is minimal. Ultimately, we expect they will be extended.

The donor-advised fund is rising in popularity. Why? Because it’s an easy and affordable way to fund charitable giving for the future.

At home with RBC: Killer cocktails

Anthony Giglio, sommelier and author of 11 books, including his annual Food & Wine Guide, teaches you how to make classic craft cocktails.

While maintaining independence for as long as possible remains a top priority for most Americans, the majority will need some level of housing and care support as they age. The good news is, there's variety of options to meet almost every need.