It has been a while since markets have had to contend with a rising rate environment. But with the benchmark U.S. 10-year Treasury yield powering through the 1.30 percent level this week—the highest since this time last year—and up sharply from a low of just 0.51 percent last August, investors are weighing the threat to U.S. stocks, where many indexes remain near record highs.

What’s driving yields? To this point, it has been almost entirely due to the market repricing inflation expectations amid rising growth projections. Where the 10-year Treasury yield is now 0.78 percent higher from the lows, the market’s expectation of 10-year inflation has risen by about 0.61 percent over that same period. Of course, that continues to bring about inflation fears, but we think the bulk of the near-term inflationary pressures in the pipeline are fully priced into markets. To wit, the minutes of the Fed’s January meeting released this week acknowledged the inflation risks this year, but that over the longer term most policymakers still viewed the risk for inflation as “weighted to the downside.”

As the chart shows, we think yields are quickly repricing toward pre-pandemic levels amid growing optimism around the economic outlook and reopening. But as these moves go, sharp rises in Treasury yields are typically followed by relatively mundane range-bound trends. The February Bloomberg survey of analysts saw a notable upward revision to 10-year yield forecasts, but the path is still seen holding below two percent through the middle of 2023. In our view, the next test for the 10-year will be the 1.50 percent level, which has effectively served as the floor for yields for the past decade. From there we share the view that the 10-year will struggle to trade above two percent until the Fed is well into the next rate hike cycle, which we think remains a number of years away. On a 12- to 24-month horizon, we see the 10-year holding between 1.50 and two percent.

Treasury yields to rise, but ceiling to remain low 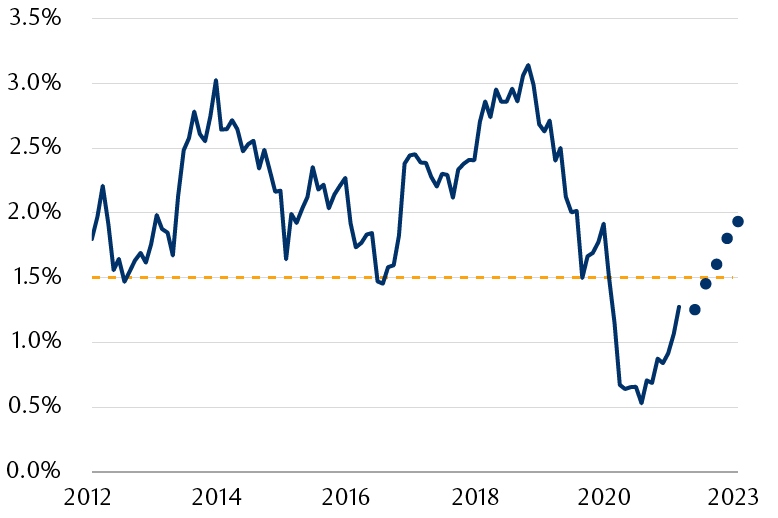 But as yields have heated up, so too have the number of headlines about the potential threat to stock market valuations. The basic story is that since a stock’s price is simply the discounted value of its future cash flows, discounting those cash flows at higher rates should lead to lower stock prices and valuations. But the key is that it’s the level of rates relative to growth. As long as rates don’t get too far ahead of corporate earnings and economic growth, the net impact should be largely neutral.

The chart directly below attempts to show this dynamic as the change in Treasury yields tends to track the path of corporate earnings, particularly of late as rising yields reflect sharply rising earnings estimates for S&P 500 constituents.

Treasury yields and corporate earnings tend to move together 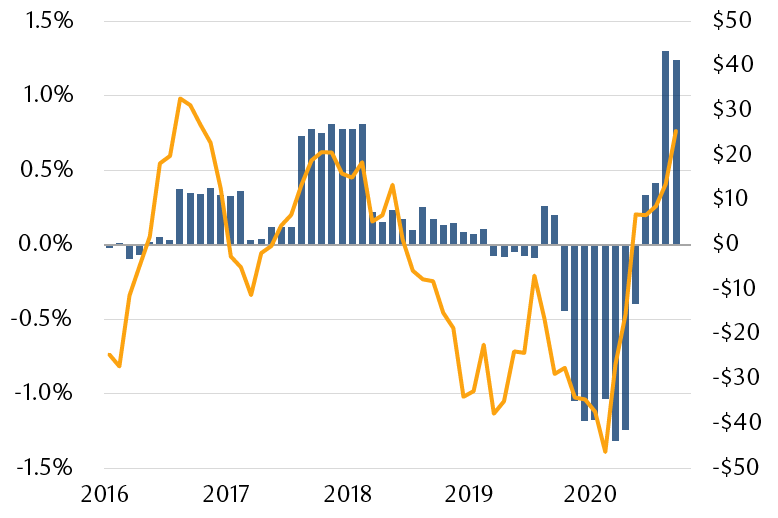 The chart also shows that higher yields and rising earnings estimates currently reflect an improved growth outlook, a factor that we think will outweigh the risks from rising rates for markets in the early stages of an economic recovery. Pair that with our view that Treasury yields are ultimately likely to remain anchored near historically low levels, and the narrative that higher yields will take down stocks quickly falls apart.

Tough to keep pace, but stay in the race

Turning back to fixed income markets, rising Treasury yields have not exactly lifted all boats. Though Treasury yields have jumped by nearly 80 basis points since last August, the average yield on the Bloomberg Barclays Investment Grade Corporate Bond Index is essentially unchanged at just 1.93 percent. Municipal bond yields have actually declined to new record lows in recent months, with the average yield on the Bloomberg Barclays Municipal Bond Index now only 0.95 percent, down from nearly 1.50 percent last fall. Needless to say, despite rising Treasury yields, it remains a challenging environment for investors starved for income.

U.S. yield curves: How to keep pace with inflation 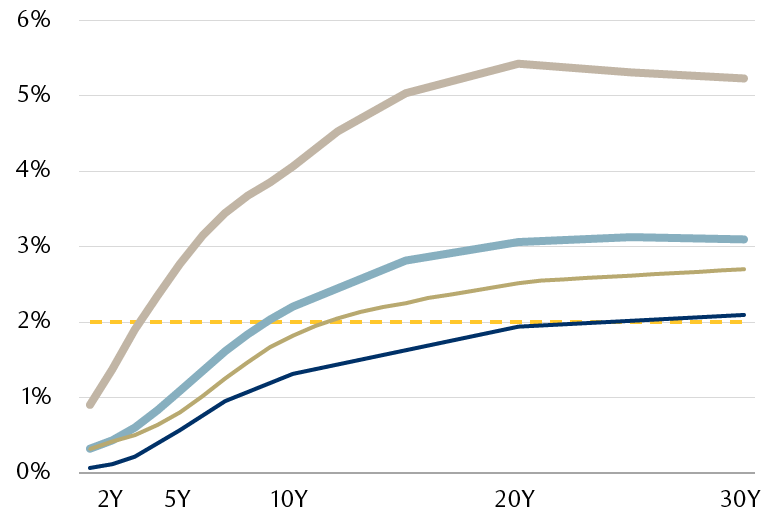 And with rising inflation expectations, that environment is made all the more difficult as investors seek out strategies to, at the very least, keep pace. We think the expectations the Fed will keep rates at zero percent for a number of years has kept yields at the short end historically low. And with that, yield curves are now the steepest since 2016, thus offering investors the chance to extend maturities for yield. We favor a barbell approach of some short-dated maturities to reinvest as rates rise along with longer maturities in order to not give up too much income. Finally, we continue to augment portfolio income with preferred shares, a sector we think will continue to be well-supported.

This article was originally published in the Global Insight Weekly with the title “The right stuff.”