The Fed announced plans this week to begin the gradual process of selling its holdings of U.S. corporate bonds and associated exchange-traded funds (ETFs) on June 7 that were purchased as part of its emergency facilities that were launched in 2020.

While the facilities provided a much-needed backstop for markets during the depths of the pandemic, the actual purchases were quite minimal, with just $5.2 billion in individual investment-grade corporate bonds and $8.6 billion of investment-grade and high-yield ETFs ultimately ending up on the Fed’s balance sheet. Put simply, we see this as a non-issue since the market no longer requires the Fed’s backstop (corporate bond purchases had already ceased at the end of 2020) and because selling approximately $15 billion worth of securities is barely a drop in the bucket for a U.S. corporate bond market that now exceeds $10 trillion.

Additionally, while this development was a bit of a surprise for markets, we don’t think this is a precursor to a near-term tapering of the Fed’s ongoing purchases of Treasuries and mortgage-backed securities. We still see tapering beginning early next year and we don’t expect that the Fed will sell those holdings into the market, as it’s doing with its corporate bond holdings. 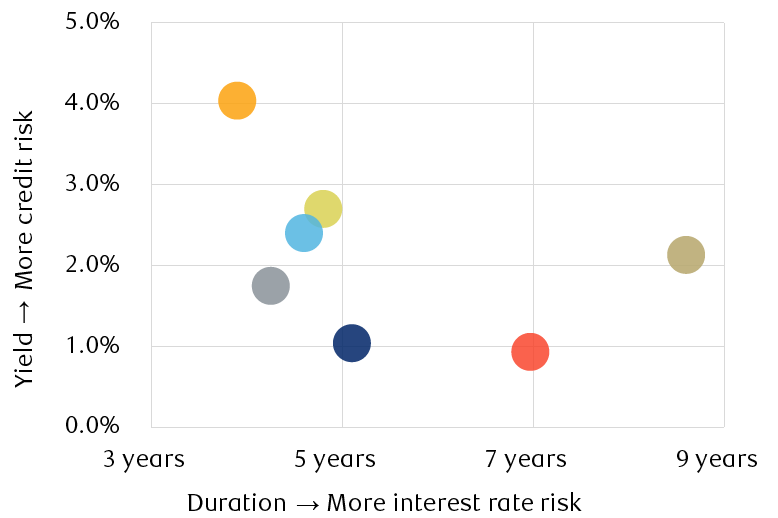 But at a time when valuations in credit markets are at historically rich levels—reflecting optimism around the economic outlook—the Fed’s exit may put a focus on risks in credit markets. So how should investors be thinking about those risks within their fixed income portfolios, and where do we see opportunities at the moment in a still-low-yield world?

The U.S. preferred share market is broadly split into two segments. There’s the retail investor-focused $25 par fixed-rate coupon market that many may be familiar with that are issued by a wide variety of firms. Then there is the more institutional investor-focused $1,000 par fixed-to-floating rate coupon market, typically called hybrids, which are primarily issued by financial firms, and to a lesser extent, energy companies.

But our focus is on the hybrid market at the moment due to the unique coupon structure that we find attractive in this environment, and because they are largely issued by banks, a sector that we expect to outperform relative to the S&P 500.

Hybrids can also be a natural hedge against many of the concerns that investors harbor at the moment:

Worried about higher interest rates? If higher inflation fuels higher yields, then the fixed-to-float coupon structure should provide some defense. The coupon is fixed for a period of five or 10 years after which it becomes a floating rate coupon at a predetermined spread to various reference indexes, if not called by the issuer. Most recent new issues in the space will float off of 5-year or 10-year U.S. Treasury note yields—meaning that investors could benefit from higher rates down the road. This structure also has a lower duration—or interest rate sensitivity—than most investors typically associate with preferred shares.

Worried about credit risks? As noted, higher inflation, higher yields, and steeper yield curves are all generally positive for financial services earnings, which should support balance sheets and the credit profiles of companies which issue these securities. On top of that, last week S&P upgraded the credit outlooks for many of the U.S. banks and consumer-focused lenders to positive, reflecting improving industry-wide trends.

To be sure, valuations across the broad investment spectrum are quite rich at the moment. Therefore, we believe these securities are a way to add income and some defense to portfolios as total returns will be modest at best over the near term, so most investors are likely to be more focused on potential downside risks.

And since preferred shares are uniquely exposed to the two major risk factors for fixed income investors—interest rates and credit quality—the downside risks shouldn’t be ignored.

But as the chart shows, the past decade has only seen about four periods of notable selloffs due to either sharply higher Treasury yields, such as in late 2016, or due to stock market corrections, as in 2018. But the period that may be most relevant at the moment would be the “taper tantrum” from 2013 when interest rates spiked following surprise talk from the Fed about ending its third quantitative easing program. We don’t expect a similar scenario this time around as the Fed nears a similar point of withdrawing accommodation because Fed policymakers have been much more transparent and vocal in communicating their plans. But it does show how the hybrid structure outperformed fixed-rate preferreds in that episode, dropping by only 5.5 percent compared to nearly 10 percent for the fixed-rate variety. 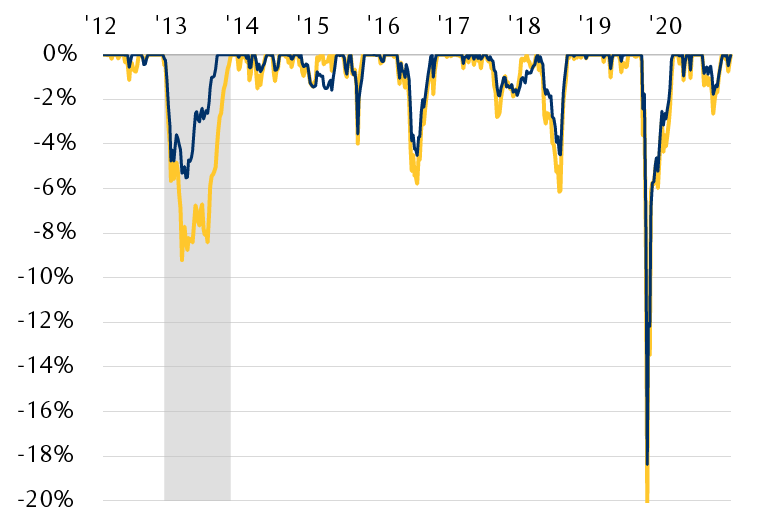 Note: The chart shows the maximum drawdown on a total-return basis from rolling one-year index highs, based on weekly data

Most investors may not think of turning to the preferred share market for defense during a time of heightened risks around higher inflation and rates. However, in a challenging yield environment, we believe thinking outside of the box can lead to outsized portfolio performance.