First there was the ISM Manufacturing Purchasing Managers’ Index (PMI) on Apr. 1 that showed the largest uptick in activity since 1983. That was then followed by the jobs report that showed nearly one million jobs added in March. Not to be outdone, the Service Sector PMI, on Apr. 5, showed activity running at the strongest level on record, dating back to 1997. Then this week we saw the headline Consumer Price Index pop to 2.6 percent year over year, and though largely fueled by weak prices this time last year, this is another sign that continues to point toward building inflationary pressures, in our opinion. Finally, stimulus-fueled retail sales data this week was off the charts, up nearly 10 percent month over month.

So, since reaching 1.75 percent at the end of March, the benchmark U.S. 10-year Treasury yield has slipped back to nearly 1.50 percent, seemingly putting the “rising rate” narrative firmly on the back burner, at least for the time being.

Surveying the landscape of traders and analysts this week looking for explanations, we think one thing is clear—no one really has any.

The easiest explanation might just be that after the torrid start to the year, yields were inevitably due for a period of consolidation. Foreign demand for U.S. bonds has also picked up notably in recent months, while the start of earnings season typically brings a glut of new corporate bond issuance—which tends to drive demand for Treasuries and hedging. The Fed continues to push back against the idea that rate hikes are anywhere on the horizon, with Fed Chair Jerome Powell stating this week that the conditions necessary for liftoff are highly unlikely before the end of 2022, let alone this year.

On top of Powell pushing back against the market’s recent expectations regarding rate hikes, he also continues to signal that near-term inflationary pressures will only be transitory, and that downside risks over the long term remain. As the chart shows, the spike in the Consumer Price Index this week to 2.6 percent is expected by RBC Economics to crescendo near 3.6 percent this quarter before falling sharply back to more stable levels. 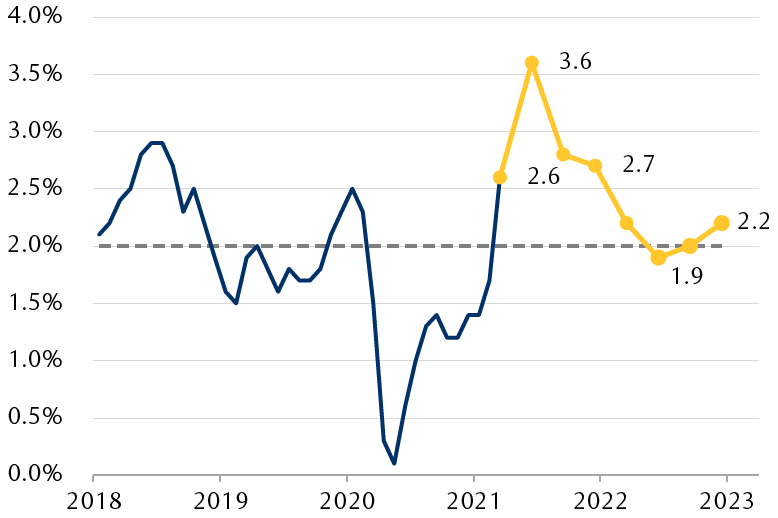 But maybe it just comes down to the classic explanation that markets—being forward-looking as they are—had already priced in a lot, if not all, of the good news and stimulus that we have seen of late, with traders now awaiting any catalyst that might be cause to take yields to the next leg higher.

Not all rising rate environments are the same

While global yields are moving lower this week, the fear around rising rates continues to be front of mind for investors and portfolios, with this recent pullback only likely to amplify the issue should yields resume their march higher.

And higher yields remain the base case, in our view. This month, RBC Economics upgraded its economic and rate forecasts, as did most analysts, with our colleagues now seeing the 10-year Treasury yield rising to 2.05 percent, up from 1.85 percent previously, by this time next year.

But what does this actually mean for bond prices and portfolio performance? With all of the moving parts in fixed income securities, things can get pretty murky, pretty quickly. At a high level, higher yields mean lower bond prices, but by how much, and how much coupon income is needed to offset declines in bond prices?

Scenario analysis: What impact does “rising rates” have on bond prices and portfolio performance?

And, for the most part, the damage is actually minimal. Outside of Treasuries, the decline in bond prices due to higher market yields is more than offset by the interest earned from coupons over that one-year period. For example, if the 10-year Treasury yield rises to 2.05 percent, the price falls by $31, which isn’t offset by the $11 in coupons. A comparable 10-year corporate would see its price fall by $27, nearly fully covered by $26 in coupons, and it’s a similar story for municipals. And longer-dated securities may actually offer investors attractive value around current levels.

So the outlook may not be as bleak as feared by many fixed income investors, particularly as we believe any further rise in yields is likely to be more gradual than we have seen in recent months.

Fired by a fresh impetus to turn ambition into action, we’re seeing a turning point for this challenge, which should open up investment opportunities.