Posturing ahead of U.S.-China trade talks frayed investors’ nerves, while another trade bout could break out as the U.S.-EU tensions heat up.

With trade negotiations between the U.S. and China resuming in Washington, markets have been subjected to what has become a well-rehearsed oscillation between optimism and concern as the Trump administration announced further measures to exert pressure on China.

The U.S. blacklisted 28 Chinese entities primarily involved in surveillance and AI, citing human rights abuses and thereby bringing this sensitive issue into the dispute for the first time. Also, Bloomberg has reported that the White House is considering blocking government pension funds from investing in China.

Uncertainty after 20 years of stability 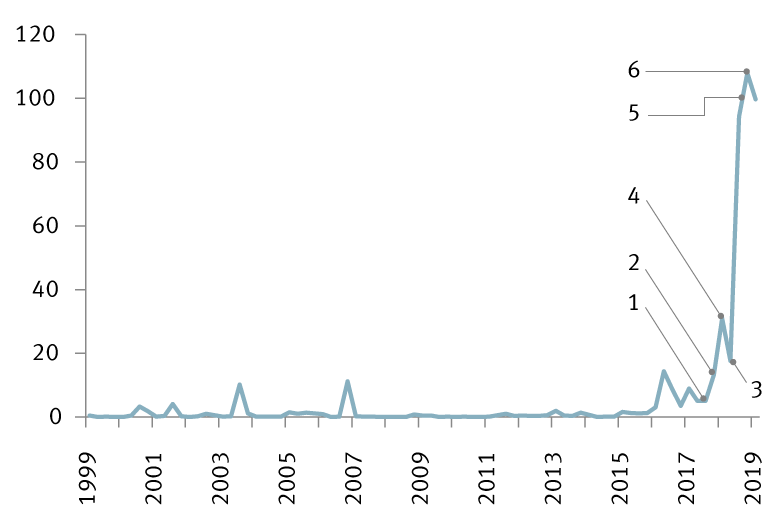 We have been pointing out for a while that reaching a comprehensive agreement will be challenging as the dispute is not only about trade, but also about intellectual property and geopolitical hegemony. As more factors are brought into the equation—now human rights violations—it will become increasingly difficult to strike a deal.

China is unwilling to surrender its long-term development policy to the U.S. This explains why it is content with working on a much narrower agreement than what the U.S. administration has in mind. Prospects for a comprehensive deal appear dim to us, regardless of what unfolds at this round of negotiations.

We believe any positive developments from the U.S.-China negotiations may be most beneficial for European equities, which have lagged, as European companies are very geared to an improvement in global growth, if not a complete resolution of the trade situation. Positive developments could herald more active sector rotation into cyclical sectors globally, and push the S&P 500 higher.

But another trade dispute is looming, that between the U.S. and the EU.

This dispute is one of the key risks we highlighted in June when we downgraded our outlook for European equities to Underweight. Ominous clouds descended recently as the U.S. slapped tariffs on a wide range of European products.

These duties are the outcome of a long-standing row going back close to 15 years. The World Trade Organization (WTO), the global trade regulator, opined that both the U.S. and Europe are at fault for having unduly subsidized their major airplane manufacturers, Boeing and Airbus, and for not having redressed the situation. WTO rules allow the U.S. and the EU to impose countervailing duties, the amount of which is set by the regulator, against each other.

In its largest retaliatory action ever sanctioned, the WTO authorized the U.S. to slap 100 percent duties on $7.5 billion of EU goods. Early next year, the WTO will pronounce what the EU is authorized to do with its own tariff offensive over the U.S.’s illegal aid to Boeing.

It is ironic that the Trump administration, which has weakened the WTO by blocking nominations to seats on its appellate body, is the first to benefit from the organization’s judgment.

The U.S. has shown some restraint, for now, by imposing only 25 percent tariffs on a wide range of imports from the EU, while new airplanes will face levies of 10 percent. The bulk of tariffs will apply to products from countries that make up the Airbus consortium (France, Germany, Spain, and the UK).

This show of strength is an ominous sign. The U.S.-EU trade talks are due to kick off when the new EU Commission takes office on November 1. In particular, President Donald Trump is expected to decide by November 13 whether to impose tariffs on cars and auto parts from the EU. This is a sore point as the auto industry is vital to the EU, representing four percent of GDP and more than eight percent of manufacturing jobs. Just under one-third of EU car exports are sold in the U.S.

Trade talks were always going to be tricky, because the U.S. wants to leverage the threat of car tariffs (ranging from five percent to 25 percent) to pry open EU agricultural markets—a political non-starter for the EU.

European consumer products to be hit by 25% tariffs

The path to escalation is clear: should the U.S. assume a hardline approach and impose tariffs on European car imports, the EU may use the WTO ruling on Boeing subsidies to strike back in retaliation. Of course, it could also act on its own ahead of the WTO’s authorization.

A bruising trade battle is the last thing Europe needs given its recent economic weakness.

We believe it will not come to that. After all, there isn’t the same bipartisan political support in the U.S. for a trade dispute with the EU as there is for China. The EU is not perceived as being a geopolitical threat nor as having stolen commercial secrets or infringed on intellectual property. Our base case is that the U.S.-EU trade conflict will not escalate to the same heights as the U.S.-China conflict. Still, it is an unwelcome development given the deteriorating business sentiment in Europe.

Overall, we maintain our Market Weight positioning for global equities but stress the importance of vigilance given the late stage of the economic cycle and the deteriorating global backdrop. We recommend an Underweight stance on European equities with U.S.-EU trade dispute noise picking up and the weakening economic environment. Yet we would be on the lookout for opportunities which may emerge from more volatile markets, such as in European companies with structural growth drivers, particularly those with strong business models and leading market positions.