The 2020 bear market and recovery differ from previous recessions in time compression on the downside and an above-average pace on the upside.

Equity market recoveries typically rhyme, despite the fact that they’re never the same, and this time is no different. Throughout this series, we’ve referenced the compression of time, and in part 5, it’s time to bring this concept to life. The COVID-19 recession and bear market have been on par with the previous five recessionary bear markets in the sense that the peak-to-trough correction (-35%) was in line with the average (-38%). The magnitude of the selloff in light of a recession should not be surprising, in our view.

However, the way this time was different could be seen in the time it took for stocks to move from their late February all-time highs to the March 23 recessionary lows. Going back to 1982, equity markets have historically taken 311 days to move from peaks to troughs. This includes such time periods as the Great Recession, the tech bubble, and other previous episodes when the Fed choked off economic growth by raising rates to combat inflation.

The COVID-19 bear market cut the 311 day peak-to-trough average by more than 90% to just 26 days. This is the very definition of time compression. Early 2020 saw a roughly average recessionary correction materialize in one-tenth the time that it has historically taken. 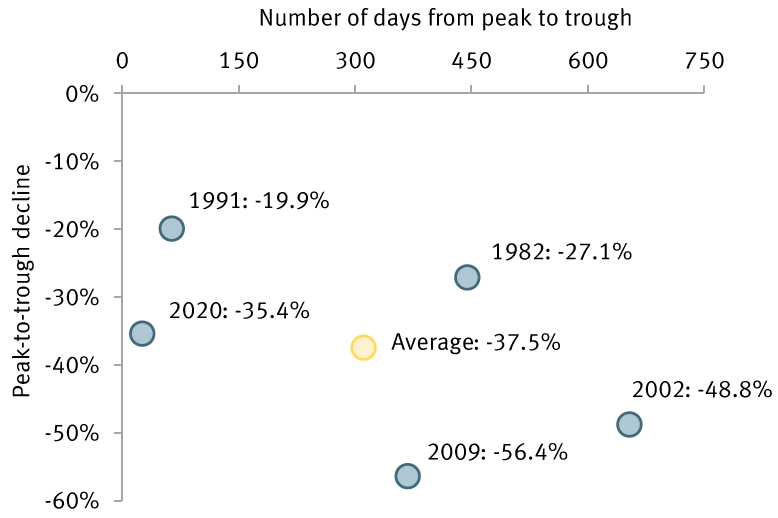 The actual decline in 2020 was on par with previous recessionary periods. However, the time in which it occurred was 90% faster than average given the 2020 bear market lasted just 26 days as compared to the average of 311 days.

With the time compression manifesting itself on the downside, is it really so surprising that it has materialized on the rebound as well? In fact, the rebound has been compressed, but importantly, not to the extent that the selloff was. Using the same 90% time compression factor on the rebound would compress the full recovery period down to just 62 days. Counting 62 days forward from March 23 is May 25. Had time compressed as much on the rebound as it had on the selloff, markets would have set new all-time highs on Monday, May 25. That didn’t happen. To be clear, we are within 5%–7% of new all-time highs, but we are yet to regain the late February levels on the S&P 500.

Further highlighting the fact that the COVID-19 equity market rebound is not as much of an outlier as the selloff is the fact that the recovery’s pace of improvement is just slightly ahead of the pace set in prior recoveries coming out of both the Great Recession and 1982. To be fair, this recovery is faster than historical precedent, but not in an overly concerning fashion given the pace of the selloff. These past recoveries highlight two additional key points. First, bumps along the way should be expected, and second, further gains from today’s levels are likely. 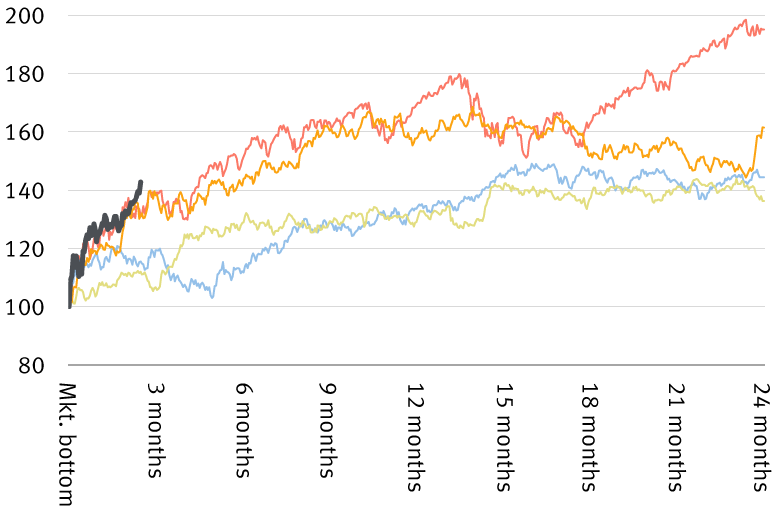 2020’s path relative to previous recoveries highlights two points: first, bumps along the way should be expected; and second, further gains from today’s levels are likely.

Going one level deeper into the recovery, sector leadership today is trending with historical averages. The leaders from the March 23 lows are the more cyclical sectors, plus Technology. Specifically, Energy, Materials, Consumer Discretionary, Industrials, and Technology are the five leaders. These same five sectors, with a rotating inclusion of Real Estate for Consumer Discretionary, were the leading sectors coming out of both the tech bubble and the Great Recession. While the current recovery gains are ahead of 3-month gains seen in the past, all of them except for Energy (coming off an extremely depressed low) have further gains to claim before reaching 12-month averages.

The 2020 bear market and subsequent recovery are, in fact, in line with the moves seen in past recessions and subsequent recoveries. The part that has been different this time is the compression of time by a factor of 90% on the downside and an above-average pace on the upside. Given this backdrop, we believe it is extremely reasonable to think that future returns will mean-revert to more normalized levels, with some bumps likely along the way. We believe that both the worst of the downside and best of the upside are in the rearview mirror, and a period of smaller moves in either direction is ahead of us.

We look at prospects for corporate earnings as investors attempt to navigate the COVID‑19 recession.