The geopolitical threat has become reality, fueling market uncertainty. We look at potential impacts on equities and what investors should watch for.

Financial and energy markets have been jolted by Russia’s precision missile strikes on Ukraine and rapid deployment of troops, tanks, and armored vehicles deep into Ukrainian territory.

The Armed Forces of Russia hit many major Ukrainian army and air force bases, and either struck or landed on some naval bases. There are conflicting media reports about whether the coveted Odessa naval base on the Black Sea has been taken, a port and city very important in the context of Russian Imperial and Soviet military and cultural history. Since 2014, NATO ships, including those of the U.S. Navy, had repeatedly docked in Odessa and launched naval exercises from there.

A number of the Ukrainian military facilities that Russia targeted with missile strikes were constructed with the help of NATO countries’ forces and funds, and were locations where NATO military instructors had previously trained Ukrainian troops. Stockpiles of NATO-supplied weapons were also targeted.

The Armed Forces of Belarus joined with Russia in the assaults on certain areas of Ukrainian territory, within the framework of the two countries’ joint Union State arrangement, which has become much more comprehensive since mid-2020, especially on military coordination.

Upon the news of the widespread military strikes, energy commodity prices immediately surged and equity markets sold off. As of this writing, the S&P 500 Index moved into slightly positive territory late in today’s trading session, and Canada’s S&P/TSX Composite Index is down only marginally due to support from the Energy sector and other commodities. The UK’s FTSE All-Share Index, the STOXX Europe 600 Index, and Hong Kong’s Hang Seng Index closed down 3.7 percent, 3.3 percent, and 3.2 percent, respectively, on Thursday.

These equity market losses come on top of geopolitical pressures that markets had faced for roughly two weeks prior, and selloffs before that due to ongoing high inflation trends and indications that central banks will accelerate their rate hike cycles. All told, the S&P 500 is currently down 11.6 percent from its January 3 all-time high, as of intraday trading today.

This conflict is part of a wider struggle

This struggle is about spheres of influence between major military powers, NATO’s expansion eastward and involvement in the former-Soviet space since the end of the Cold War, deployments and flight times of advanced missile systems in Eastern Europe, locations of short- and intermediate-range nuclear weapons, competition for energy sector market share, and more.

It is unclear how events in Ukraine will ultimately play out—there is now the possibility that the country’s borders will end up being much different than they have been for the past 30 years of its statehood, or that its leadership will change.

Regardless of what occurs in Ukraine, we continue to believe that Russia is more focused on its wider, primary security interests that entail negotiating the following with the U.S. and NATO:

History as a guide to market performance

Even though Russia’s strikes on Ukraine have no analogues in modern warfare—especially due to Ukraine’s relationship with NATO countries—it is important to keep in mind how financial markets generally reacted to previous wars and serious geopolitical events. After all, almost all of those situations were also unique.

In the 18 post-World War II events that we evaluated, the S&P 500’s selloff was limited in magnitude at 6.2 percent, on average, and typically played out over a brief period, as the table illustrates. At times the selloff commenced before the actual war/hostility started (as in this case), and at other times the selloff began right when war or the event hit. Our table attempts to take into account any relevant pre-war and pre-event periods of weakness.

While this 6.2 percent level of decline is nothing to dismiss, it’s well within the bounds of a typical pullback in many scenarios that often confront markets, including those that have nothing to do with military risks.

On average, the pullbacks and corrections tended to last 30 days from the time the selloff began until the market climbed its way back to even. This occurred despite the fact that many of the actual events lasted longer—sometimes much, much longer.

* The date attempts to capture any material pre-event impact. ^ Other economic and monetary policy factors negatively influenced the number of days it took the market to get back to even; this is not counted in the average number of trading days back to even.

It’s notable that two deeper and longer-lasting corrections were associated with events that meaningfully disrupted energy markets, weighing on economic growth—a risk in this case. The instances when this occurred, which are highlighted in orange, were in 1990 when Iraq invaded Kuwait and seized its oilfields, and back in 1973 during the Yom Kippur War and Arab oil embargo. The market declined about 16 percent in each of these cases.

Thus far, we estimate that the S&P 500 has been negatively impacted by risks associated with geopolitics and Ukraine since February 11—this is the date that we observed equity industry traders begin to write consistently about these risks. (The energy market was sending warning signals earlier, going back to late 2021 when oil prices began to surge, soon after Moscow delivered its formal European security proposals to Washington and NATO.)

Since February 11, the S&P 500 has pulled back 4.2 percent as of intraday trading today.

If there is some dialing down of hostilities or hints that diplomatic progress can be made—there is actually scope for this to occur—pressure on financial markets should ease. However, if tensions remain extremely high or additional military events unfold, equity markets could continue to sell off.

Energy and sanctions uncertainties are the immediate risks to equities

Importantly, energy sector risks are ever present today, particularly if sanctions hit the Russian energy sector further, or if the pipeline that carries natural gas from Russia, via Ukraine, to Europe is damaged. The RBC Capital Markets commodity team points out that there is not enough spare liquefied natural gas capacity to replace Russian pipeline gas should pipelines to Europe be cut off. Furthermore, natural gas storage levels in Europe are much lower than normal—there is little room to maneuver.

It is unclear at this stage which types of strong sanctions will be applied by Western governments on Russia, and which types of counter-sanctions Russia might implement. After months of debates about various sanctions scenarios, Western capitals still seem like they have not yet reached a consensus about whether Russia will be cut off from the SWIFT financial payments network, but it is looking increasingly possible.

The economy will set the longer-term tone for markets

Ultimately, after the immediate equity market impact of the Russian military assault fades, the trend of the U.S. and global economic and earnings growth will set the tone for developed market equities going forward, in our view.

The good news is, heading into this crisis, all seven of our leading U.S. economic indicators were healthy—flashing green—and none of them were hinting of recession risks.

The current Q4 2021 corporate reporting season, which is drawing to a close, has shown solid earnings, revenue, and profit margin trends. Management teams have largely issued constructive guidance despite the ongoing inflation challenges and lingering supply-chain issues due to COVID-19.

Furthermore, it’s important for long-term equity investors to consider that corrections of 10 percent or more are not uncommon, even in good years. The S&P 500 pulled back by this level at some point during the year in more than half of the years since 2000, as the chart shows.

Reality check: Pullbacks happen even in good years; since 2000, more than half of the years have included pullbacks of 10% or more for the S&P 500 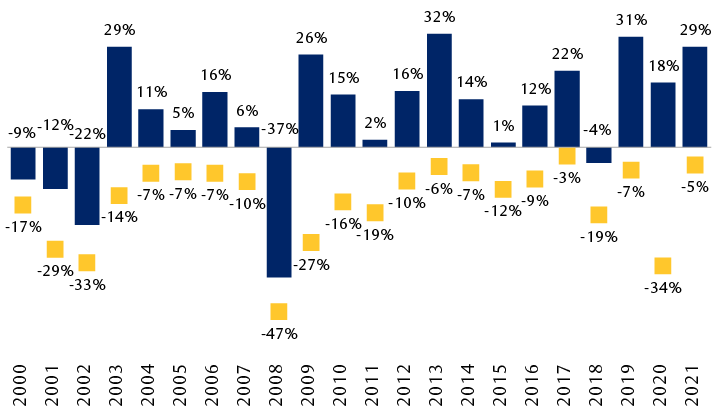 Annual performance of the S&P 500 including dividends from 2000 to 2020. For each year, the maximum peak to trough declines are also shown. This illustrates that even when the market performs well for the full year, meaningful pullbacks and corrections can occur. For example, in 2003 the S&P 500 rose 29%, but the market pulled back 14% at some point during the year. In 2009 the market finished the year up 26%, but at one point it had been down 27%. In 2020 the S&P 500 rose 18%, but at one point during the height of the COVID-19 crisis the market was down 34%.

Stay alert to how the situation evolves

Events in Eastern Europe are unfolding rapidly and have the potential to impact financial and energy markets further in coming days and weeks—much could depend on the specific sanctions and counter-sanctions that are implemented and whether they impact Russia’s overall crude oil supplies and European natural gas supplies.

But if history is a guide, and if cooler heads prevail in Washington and Moscow regarding sanctions and counter-sanctions, the equity market impact associated with this conflict could play out in short order, even if the ongoing dispute between Russia and the U.S./NATO lingers for a longer period.

Is the U.S. stock market finding some relief for its valuation problem?

The rough January has taken some of the air out of the U.S. market’s most expensive stocks. This is a good sign and supports our constructive outlook.

What should investors look for in China’s equity market?

Faced with a challenging global economic environment, China is following its own path. We discuss near-term prospects and investment considerations.