The explosion of AI technology is creating real opportunities for investment strategy as these transformative innovations are here to stay.

Artificial intelligence (AI) has been dominating the headlines—all the way from the transformative opportunities it can bring to society, businesses, and governments, to the science fiction doomsday scenarios. There is a great amount of hype surrounding AI, and the first step to assess the extent of its impact is to remove the mystery and understand what it has to offer.

AI is an “umbrella” concept, covering a wide range of disciplines and technologies, including machine learning, deep learning, and cognitive computing, among others.

The “intelligence” aspect of AI is at the root of what the technology can do—intelligence is the capacity to connect comprehension with logic, which results in the ability to draw conclusions from previous experiences. Humans process information like this day in and day out, without even thinking about it. As such, AI can be interpreted as a set of algorithms (logic), programs (instructions to a computer), and statistical models that interact to replicate an output very similar to that of human intelligence.

However, AI is unable to connect insights or understand specifically why something is happening—another key aspect of human thinking. A book published by New Scientist on the topic states that “AI can’t strip us of our jobs, our dignity or our human rights. Only other humans can do that.” This suggests that humans are ultimately responsible for their future. In other words, at this stage it’s humans who control AI, not the other way around. 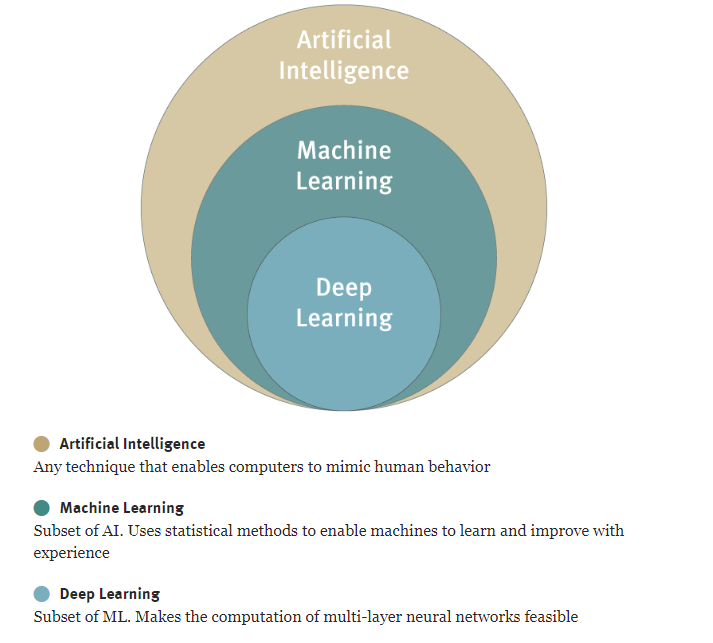 While AI might seem like a very 21st century concept, it is not new. The term was coined in 1956 and AI went through alternating phases of early development followed by hibernation. During the 1970s and later in the 1990s, research progress completely stalled for nearly two decades—what became dubbed the “AI winters”—due to unfulfilled promises and lack of funding.

Its revival has been driven by a simultaneous improvement of factors never seen before: the availability of immensely large volumes of data (big data), the advancement of machine learning algorithms, cheap data storage, and increased computing capacity via graphics processing units (GPUs) that meaningfully reduce computation time. AI would not be fully viable without any one of these improvements. For example, consider the dramatic decline in storage costs that enables AI users to store previously unimagined quantities of data, so much data that it is doubling in size every two years. In 1980 one gigabyte of storage cost $437,000; by 2016 the cost had plunged to just under $0.02.

Even though we can loosely define AI, there is no uniform definition that everyone agrees on. A philosopher would look at it from an existential point of view, but a computer scientist would evaluate a machine’s ability to perform tasks requiring human intelligence and an economist might look at AI’s impact on GDP growth.

Some see the potential for significant leaps in AI, especially related to the human brain. Futurist and Google’s Director of Engineering Ray Kurzweil suggests that for the last 4,000 years the human brain has been “limited by a fixed architecture of enclosure” and AI has the ability to “expand our neocortex”—the part of the brain responsible for higher functions—in quantity and quality. During a TED Talk he said that “if you need some extra neocortex, you’ll be able to connect to it on the cloud directly from your brain. That additional quantity will again be an enabling factor for another qualitative leap in culture and technology.”

This prospect might be exciting to some and dreadful to others. While it’s intriguing to contemplate future scenarios, it is yet to be seen to what extent far-reaching projections such as these will materialize. Even without massive leaps, today the opportunities for AI are vast and we believe it is evident that human expertise has the potential to be augmented by a combination of human and machine intelligence, which surpasses that of either a human or a machine on a standalone basis.

AI is already beginning to make its mark in a wide variety of industries. For the first time in its decades-long history it has become commercialized. Internet giants use it for search optimization and product recommendation, among other applications, while businesses outside of the technology industry have begun to implement AI for uses such as fraud detection, facial recognition, mapping the customer journey, and much more. It has even made some headway in art and media—a painting created by AI recently sold at a Christie’s auction for $432,500 and the world’s first AI news anchor has gone live in China.

Currently, the global market for AI is estimated to be approximately $7.3B and is forecast to reach some $90B by 2025, based on Statista data. North America is expected to be the biggest consumer in the market with its widening usage of AI applications across numerous business verticals, while Asia Pacific will likely experience the fastest growth in uptake of the new technology, according to Reuters. AI is rapidly emerging as an industry in itself.

Impact of AI on major sectors

Because AI’s commercialization and presence in public equity markets are relatively new, so far AI offers limited opportunities for pure-play investment. The direct beneficiaries are confined to areas like software, where some companies have established a first-mover advantage. As time passes, as happened with previous technological breakthroughs (e.g., the internet), the massive number of private AI startups likely will be reduced to only a comparatively few winners, in our view.

Another approach would be to invest in indirect beneficiaries, companies that would benefit from incorporating AI technologies in their business. In addition to technology and communication services, we expect five industries to benefit in the near future:

New AI innovations in the health care industry are appearing with great rapidity, making it the most promising industry, in our view, where image recognition has dramatically improved diagnostics—detecting melanoma skin cancer with 95 percent accuracy, for example—adding decision-making support and improved patient monitoring. Big data combined with AI is opening up the possibilities of customized, individual therapies replacing the “one-size-fits-all” protocols that have characterized cancer treatment for decades. Heart disease diagnosis and treatment could benefit in the same way. Deep learning and predictive analytics tools are reducing the costs and time of drug development by predicting the therapeutic use of new drugs, thus driving significant efficiency gains.

Industry practitioners expect autonomous vehicles to transform the future of transport along with other AI solutions that will: predict traffic flow and analyze pedestrian patterns to reduce accidents, speed traffic flow and the efficient movement of goods, reduce congestion, air pollution, and energy consumption; not to mention free up valuable land and physical assets currently dedicated to housing and storing autos that are often in use for less than an hour each day.

AI supports production forecasting and quality control with robotics and sensor technologies. In its 10-year strategic plan, “Made in China 2025,” China is revamping its industrial base, and the International Federation of Robotics expects China to account for 40 percent of the total worldwide sales of robots by 2019.

AI’s applications in e-commerce include product discovery tools such as visual search, 3D virtual reality, customized product recommendations, targeted marketing, and potentially delivery through AI-powered drones or other self-driving vehicles. Importantly, AI’s predictive analytics could provide, and in some cases already are, the rapid just-in-time inventory management that would permit brick-and-mortar retailers the capacity to compete more effectively against the online threat.

We believe AI offers transformative opportunities for society, governments, and businesses, even though the state of the technology still lags the hype. Like other periods of rapid industrial/technological change, we expect AI’s emergence will create a substantial increase in global wealth in the coming decades. However, it is unlikely that increased wealth will be delivered equitably or “fairly.” There will undoubtedly be large dislocations that produce both winners and losers.

What is clear to us is that AI is here to stay. As with the arrival of computers, automation, and the internet, those companies that pursue the opportunities AI presents and understand the competitive threats it may pose, will likely fare better than those who choose to ignore it or fight a rearguard action to forestall it. We believe factoring its impact into investment decisions and choices will rapidly become a “must have” rather than a “nice to have.”