We believe it will take some doing to get the U.S. into recession from here but are treating the inversion as a shot across the bow for investors.

This has garnered a lot of attention because in past economic cycles “inversion” has proven to be a reliable signal that a U.S. recession was on the way—on average about 11 to 14 months from the date of inversion.

Long, bruising equity bear markets, not just in the U.S. but also in Canada, the UK, Europe, and Japan, have been associated with U.S. recessions. These bear markets have typically started months before the recession gets underway. That makes inversion of the yield curve a valuable early warning signal that a more defensive investment state of mind is called for.

Is the recession clock starting?

The debate is already raging as to what, if any, credence should be given to the yield curve’s signal this time. There are a number of arguments—some very compelling—asserting that this inversion has occurred for very different reasons than in past cycles and therefore can be safely ignored. Perhaps. But in our experience, arguments like this have always surfaced around the time of previous inversions and, even though the mechanical reasoning was often correct, a recession (and equity bear market) eventually arrived.

Yield differential between the 10-year and 1-year U.S. Treasury notes 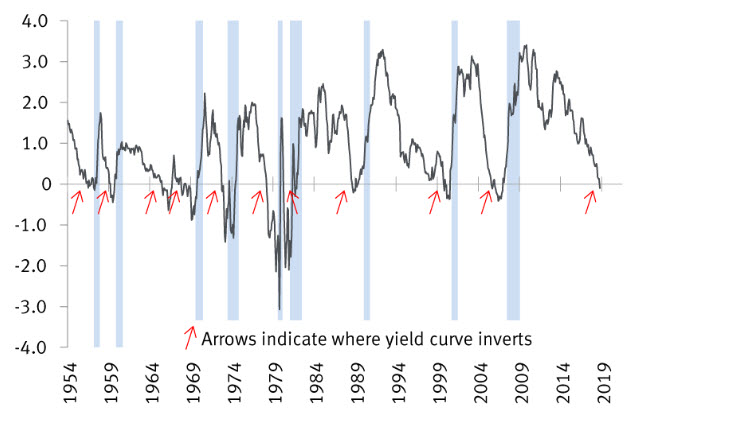 Yield curve inversions lead recessions by about a year on average.

There was one exception. The yield curve deeply inverted in 1965 and no recession ensued. However, U.S. GDP growth went from 10.1 percent (yes, that’s no typo, 10.1 percent!) in Q1 1966 to an effective standstill at 0.2 percent five quarters later. Around that time the stock market corrected by a brisk, but not disastrous, 20 percent.

Despite the wonderful track record of yield curve inversion as a recession/bear market early warning, we believe the routes taken by the economy and markets this time will undoubtedly wind up being different in some important aspects. That should make investors reluctant to bank everything on a signal given by just one indicator, no matter how historically reliable.

Eric Lascelles, chief economist for RBC Global Asset Management, rates 17 different economic variables and concludes that this longest of U.S. economic expansions is in its late-to-end-of-cycle phase. Of course, this last part of the expansion cycle before the next recession arrives could prove to be very drawn out. Certainly the early-cycle and mid-cycle phases were unusually extended.

Our U.S. recession scorecard follows six indicators, all of which have usefully warned of recessions ahead of time. Three (the yield curve, unemployment claims, and the Conference Board Leading Economic Index) have given their signals about a year ahead of the recession getting underway. The other three (see below) typically flash red much closer to the event. To date, only the yield curve has given a warning signal. 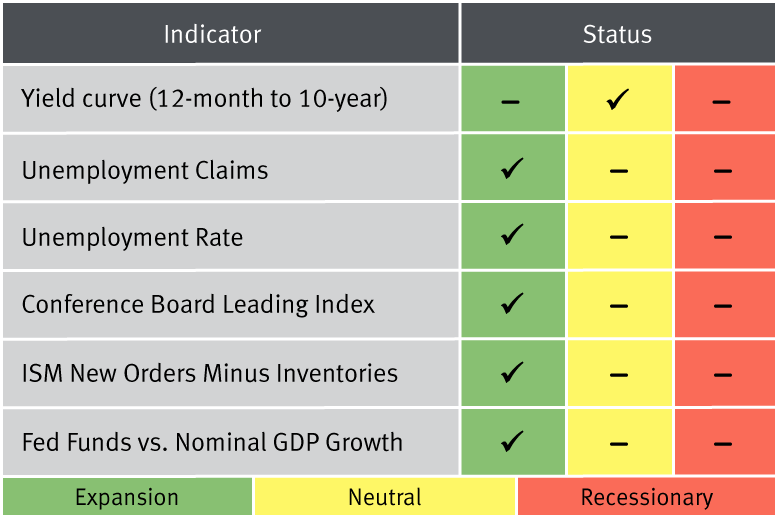 Indicators aside, we believe it will take some doing to get the U.S. into recession from here. One need only check in on the American consumer who thoroughly dominates the U.S. economy at almost 70 percent of GDP. Consumers are confident and for many good reasons. The unemployment rate was last below four percent in the mid-1960s; unemployment claims recently hit all-time lows; there are 7.6 million unfilled jobs on offer, according to the Labor Department; wage rates are rising nicely; home values and other components of household wealth are elevated and don’t look frothy or otherwise overly vulnerable; and consumer spending has remained mostly in line with income growth, suggesting household debt has not become unmanageable.

It has usually taken the arrival of tight monetary conditions to tip the economy into recession. “Tight money” has two necessary components: prohibitively high interest rates and banks that have become noticeably more restrictive in their lending practices. Neither is present today and with the Fed apparently on hold for the rest of this year, restrictive credit conditions still lie some ways off. Looking at the latest monthly survey of thousands of small and medium-sized U.S. businesses by the National Federation of Independent Business, just three percent of respondents (historically very low) report being unable to get the credit they need, while 51 percent say they need no credit.

And what does this say for investment strategy?

The “inversion signal” has always been hard for investors to get behind precisely because it has given such a long early warning. It is usually followed by several quarters of positive economic growth—one such interval lasted almost two years. And the stock market typically has some months or even quarters to go before it sets its final high. It is difficult for investors to adopt a defensive approach when the economy continues to perform and earnings look set to go on growing.

For our part, we note that most stock markets are still below last year’s highs and about at the same level as 12 months ago. Price-to-earnings multiples are reasonable and no longer as extended as they were in early 2018. We have been impressed by the power and breadth of the liftoff from the ultra-depressed December low point. We expect new highs lie ahead for the U.S. broad averages and for most developed economy stock markets.

We are content for now to maintain our benchmark target weight (Market Weight) exposure to stocks in a global portfolio. However, we are treating the inversion of the yield curve as a “shot across the bow” for equity investors. We expect to counsel the adoption of a progressively more defensive posture over the course of the next six to 12 months.