Investors should be proactive and think about how to adapt their portfolios to the climate change challenge … and opportunity.

Climate change—by which we mean the increasing occurrence of extreme weather events such as freak storms, all-engulfing floods, or debilitating droughts—has been affecting the lives of a growing number of people. Witness Houston, Texas, which endured three massively damaging floods over the span of 2015, 2016, and 2017, each of which was rated a 1-in-500-year event.

In 2018, 415 asset managers, together overseeing assets totaling $32T, signed an open letter to governments urging more action on climate change, which they say threatens their holdings.

The World Economic Forum (WEF), in its Global Risks Report 2019, noted that climate change, already a major concern in 2018, had moved up a notch in its ranking of the most pressing risks. A survey of the WEF’s stakeholder-respondents, made up of insurance and reinsurance companies, banks, and industry-based focus groups, revealed the top three global risks are related to climate change. 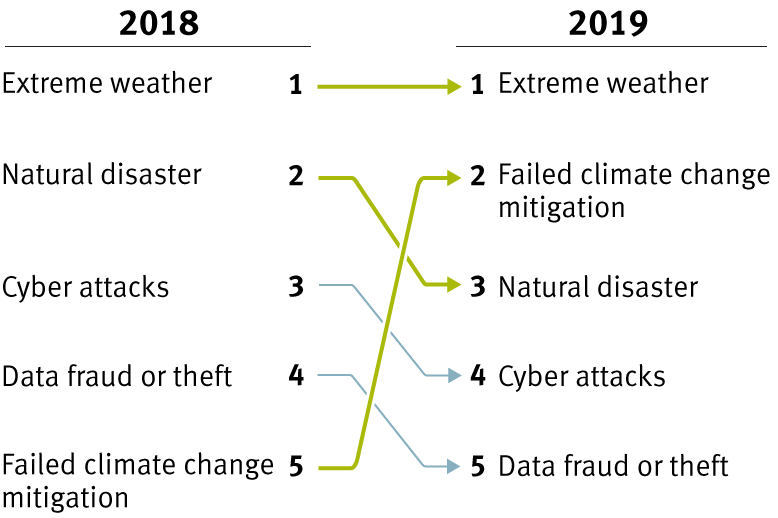 Climate change, already a major concern in 2018, has moved up a notch.

How can climate change affect businesses?

Effects of climate change impact countries and sectors unevenly. Eric Lascelles, RBC Global Asset Management’s chief economist, points to research arguing that, logically, warmer countries will likely be affected most negatively, while some colder countries might not be negatively affected to the same degree. Asia is seen as most vulnerable, particularly China with close to 150 million people living in coastal areas threatened by rising sea levels as polar ice caps are melting faster than previously forecast.

Yet investors living in the Northern Hemisphere should not be complacent. Climate change can lead to increased costs for businesses, some tangible and visible, some less so, but costly nonetheless.

For example, extreme heat can not only reduce crop yields, increasing the cost of raw materials for food companies and households, it can also cause huge spikes in power prices, increasing energy costs. It can also affect labour productivity across a wide swath of industries, from agriculture to call centers to construction. Crippling heat and humidity may threaten equipment in data centers.

Droughts can be devastating too. In the second half of 2018, the water levels of Germany’s Rhine River, a key transport corridor for moving industrial products, declined to a 12-year low, so barges could not be fully loaded. BASF, a German chemicals manufacturer and only one of the companies affected, stated that it incurred some $250M worth of additional costs to use other, more expensive modes of transport.

It’s not just businesses that are preoccupied. Central bankers are also studying how monetary policy could be impacted. Extreme weather events can affect growth and push inflation higher, impeding policymakers’ ability to decipher underlying economic trends. In the example above, lower water levels in the Rhine contributed to lower economic growth while at the same time driving up inflation due to resulting fuel shortages.

In the U.S., repeatedly weak Q1 GDP data over a number of years has in part been explained by weather factors, but what if these mask a real slowing trend? Bank of England Governor Mark Carney has gone as far as suggesting that the potential impact of climate change be included in bank stress tests.

Over the long run, according to Lascelles, climate change could result in a loss of economic output through an unpalatable mix of less favourable climate conditions for economic activity, and the cost of adjusting to an altered climate, including insurance costs or liability risks.

As the amount of carbon dioxide in the atmosphere rises, the debate continues about what costs higher worldwide temperatures will impose on the global economy. Lascelles refers to work by American Nobel Prize-winning economist William Nordhaus which estimates that those costs will rise exponentially. A temperature rise of two degrees Celsius above pre-industrial levels will cost the global economy one percent of lost output by the end of the century. But double the temperature increase to four degrees and the cost quadruples to a much more painful four percent of lost global GDP. 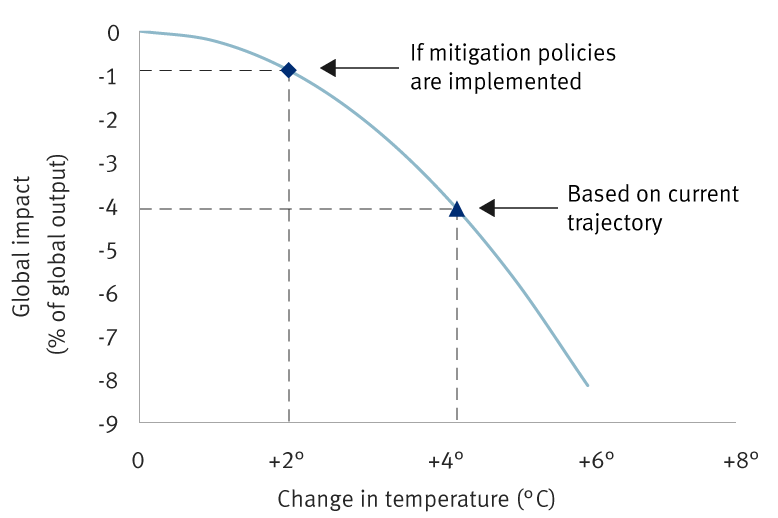 The damage from climate change will be non-linear.

Note: Change in temperature relative to pre-industrial levels defined as the period from 1850 to 1900.

The damage would be gradual but insidious, Lascelles says, with the global economy only growing by a few hundredths of a percentage point slower per year. Spread over many decades, this would certainly add up.

Few companies talk about the potential impact of climate change on their infrastructure or actively manage climate risk for fear of exposing a potential weakness or liability. For CEOs focused on delivering the next set of quarterly results, so many other factors may seem more urgent, tangible, predictable, or even easier to prepare for, such as fending off the consequences of wage growth or more intense competition. According to S&P Global, only some 15 percent of companies in the S&P 500 disclose effects on earnings from weather-related events.

Many corporate management teams worry that preparing for climate change may put a company at a competitive disadvantage. The significant negative effect on cash flows and margins for a company which is building slack and/or redundancies into its supply chain to offset the impact of potential floods could damage its competitiveness if rivals don’t follow suit or don’t have to because they are located in regions that don’t face the same climatic risks.

Despite the reluctance of companies to publicly acknowledge the challenge, we believe investors can and should take climate change into consideration as it may impact investment returns. Mercer, a consulting firm for institutional investors, opines that the performance of agriculture, timberland, real estate, and emerging market equities would be most affected in a worst-case scenario of a four-degree increase in temperature.

It is widely believed investors could start shunning companies perceived to be negatively exposed to climate change for fear liabilities will eventually materialise. PG&E, a U.S. utility, offers an extreme example. The enormous legal liabilities stemming from PG&E’s possible role in sparking California’s massive 2018 wildfires, which fed on an increasingly parched landscape, far exceeded the company’s insurance coverage. With its debt downgraded by rating agencies, credit became unavailable, and PG&E, targeted by short sellers, had to file for bankruptcy protection.

Lascelles points out investors may start to actively sell companies and regions of the world that may be hurt the most by climate change.

ESG funds (which factor in environmental, social, and governance criteria) now make up a substantial and growing 26 percent of all professionally managed assets in the U.S. as of the start of 2018, according to the US SIF: The Forum for Sustainable and Responsible Investment. The managers of these funds will decline to own companies that do not stand up to their scrutiny.

Some companies may even see their cost of borrowing increase. Credit rating agencies have started to include climate risk considerations into their assessments. S&P Global altered over 100 corporate ratings in 2017, or twice as many as in the previous two years, pointing to environmental and climate considerations. Fitch and Moody’s are following suit. In time, funding costs will rise for companies vulnerable to climate change, with potentially serious consequences for profitability.

Not all bad news

Investors wishing to focus on companies best placed to deal with the challenges of climate change could focus on ESG funds whose managers scrutinize their holdings so as to minimize these risks. In addition, climate change can also unearth opportunities for new industries and innovative companies to develop products and strategies to address or mitigate the environmental damage of climate change.

Renewable energy and electric vehicles are top of mind these days, but there is a whole range of other industries and spaces which stand to benefit:

Change in the air

More and more, climate change is creating a climate of change for businesses and investors. Companies will increasingly need to think about how climate change affects the way they do business. We are already seeing central bank policymakers as well as rating agencies considering the potential impact. Investors too should be proactive and think about how to adapt their portfolios to the climate change challenge … and opportunity. The returns of investments in companies and regions most exposed to climate change may be hurt. We would be on the lookout for companies which address, monitor, or help avoid environmental damage and those which successfully prepare for climate change, as they are likely to find favour with investors.