Inflation remains persistently below target in the face of solid growth and record-low U.S. unemployment. Is there a solution in sight?

It may be somewhat hard to believe that after nearly 10 years of economic expansion following the global financial crisis, a decline to a 50-year low in the U.S. unemployment rate to 3.6 percent, and trillions of dollars of stimulus measures taken by global central banks, we’re still talking about the puzzle of low inflation. Yet, here we are.

While trade wrangling, growth fears, and bouts of market volatility have put central bank rate hike plans on ice for now, it’s the undercurrent of little—if any—inflationary pressure that has sustained expectations for easier monetary policy. The U.S. markets are now pricing as many as three  Fed rate cuts by the end of 2020.

As the chart shows, the preferred inflation indexes for both the Fed and the European Central Bank (ECB) have only infrequently been at target this cycle. In fact, U.S. inflation has only been at target five percent of the time since the end of the financial crisis in 2009 and just a quarter of the time over the past 20 years.

Inflation has spent much of this cycle under key levels 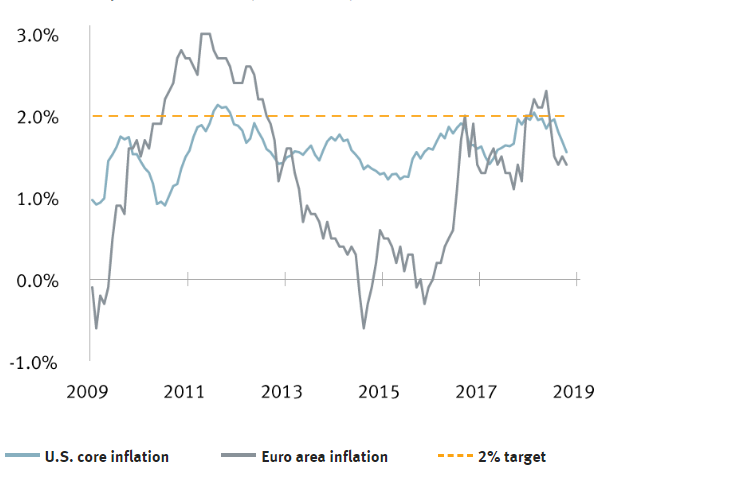 Inflation has neared the targeted two percent level recently, but concerns are growing that it could again undershoot central bank objectives.

So what are some root causes of inflation shortfalls and how might central banks adjust their methods of achieving inflation objectives?

The breakdown of classic inflation drivers

At the root of the issue in recent years has been the flattening of the so-called Phillips Curve, or the framework the Fed uses to forecast inflation, which simply describes the typically strong relationship between falling unemployment and rising inflation. But even with unemployment in the U.S. near a 50-year low, wage growth has been only modest, as have broader measures of inflation this cycle.

While there have been numerous attempts to explain why this relationship has broken down, perhaps it’s simply no longer an apples-to-apples comparison. Inflation—or the lack thereof—has become a global phenomenon over the past 40 years as trade and production have shifted around globally. It may no longer be in the Fed’s, or any central bank’s, control—whereas unemployment for developed markets remains largely driven by the monetary policies of any given central bank. To illustrate this dynamic, in the U.S., core inflation has averaged just 1.3 percent annually over the last five years. But broken down further, prices for a basket of services (70 percent of spending)—and largely a domestic factor—have risen an above-average 2.4 percent, but prices of goods (30 percent of spending) that the U.S. largely imports have declined an average of 2.1 percent each year.

Making policy decisions based on this Phillips Curve framework in anticipation of inflation that never materializes only heightens the risk of policy errors.

Future inflation lies in the past

As shown in the following chart, consumer long-term inflation expectations have been in steady decline during this cycle, reaching the lowest levels since the University of Michigan survey began asking the question in 1979. And therein lies the risk of central banks persistently undershooting inflation targets, and why inflation is desirable in the first place: consumers expecting lower prices ahead may delay spending, which would only weigh on growth, while businesses may be reluctant to raise prices and make new investments—at best creating a cycle of low inflation that ultimately puts the credibility of central banks in jeopardy, and at worst sparking deflationary spirals. 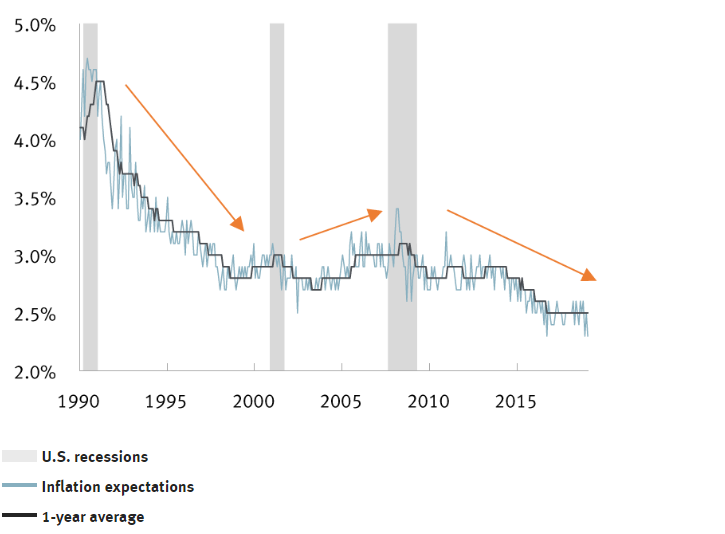 One factor driving lower inflation may simply be that consumers expect inflation to be lower in the future, perhaps a byproduct of the Fed missing inflation targets.

So now that both actual and expected inflation appear to have decoupled from target levels, are global central banks on the verge of a shift in strategy?

Time for a change in approach

In the U.S., the Fed has embarked on a year-long study of inflation targets that will be presented at a conference in Chicago this month. This could be the first step toward the adoption of a new policy by the Fed, perhaps as early as later this year. The two most frequently discussed ideas are to either raise the inflation target above two percent or to implement a price level targeting regime, with a version of the latter being a far more likely option, in our view.

Under a price level targeting system, bygones would no longer be bygones when it comes to missing inflation targets. Meaning that any “lost” inflation would have to be made up for with inflation above target for a period of time, until prices are back in line with a two percent annual trend. Let’s say, for example, that the Fed wanted to make up for all of the inflation misses since 2009—to get back on trend would mean letting inflation run hot at about 2.5 percent for a period of five years. While higher, it’s not markedly higher. Within the current system, the Fed simply manages policy with the intention of returning core inflation to two percent within a 1-3 year window.

But the Fed has spent the better part of 40 years since the Paul Volcker-led Fed “broke the back of inflation” in 1981 in pursuit of achieving the second part of the Fed’s dual mandate: low and stable prices. Why would it risk undoing that now?

The trouble that central banks face is that low inflation creates greater risk that policy rates both return to the zero percent lower bound, or lower in the case of the ECB and the BoJ, and spend greater amounts of time there during downturns. Policymakers are simply seeking methods to give policy tools greater room to breathe down the road. The policy approach to inflation over the last 40 years may not be optimal for the next 40 in a world where interest rates are likely to remain stubbornly low, largely weighed down by demographic trends amidst aging populations. 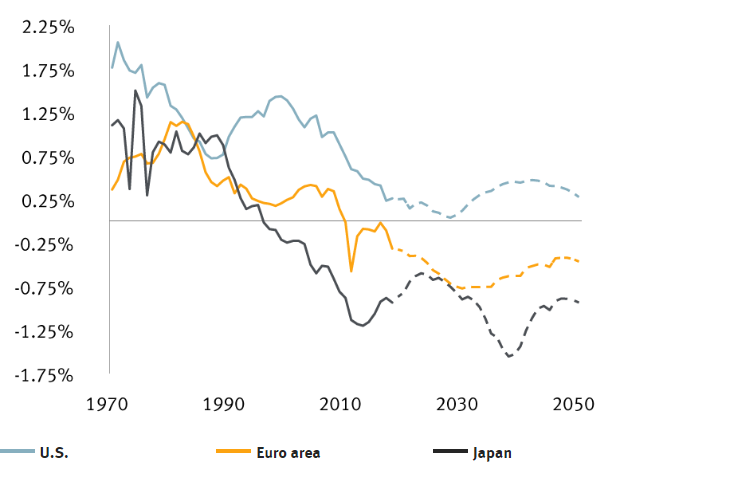 Demographic trends are one of the key factors likely to keep inflation muted, necessitating a change in strategy from central banks.

ECB President Mario Draghi has said that the central bank is not currently reviewing its stated objective of inflation rates below, but close to, two percent but noted that it is awaiting the findings of the Fed’s study.

Regardless, the policy prescription for dealing with persistently low inflation is likely going to be a return of “lower for longer” with respect to interest rates as central banks seek to get inflation back to target on a sustained basis.

The main point is that all of this is likely to result in lower rates and moderately higher inflation. For equity investors, stocks are largely a natural inflation hedge, though the primary concern would be faster wage growth from ever-tighter labor markets that eats into corporate margins. That said, corporate profitability, at least in the U.S., remains historically high, offering a sizeable buffer.

For fixed income investors, we reiterate our view that investors need to get comfortable extending maturities. Reinvestment risk remains the greatest threat to portfolio performance, as not only are short-term rates likely to remain flat at best, but they are likely to move lower, with the market pricing nearly three Fed rate cuts by the end of 2020.

Despite recent market volatility, we believe this setup of easier central bank policy should continue to favor risk assets including stocks and corporate debt over the near term, but over the longer term this strategy is not without risks. If central banks go down the path to lower policy rates in pursuit of higher inflation, risks of asset bubbles and financial instability will rise, in our opinion, as will the need for investor vigilance.

We’ll look to see what the Fed decides and whether others follow, but the major global central banks look to be closer than ever to at least tweaking how policy goals are achieved. The policy prescription is likely to be a return to lower rates for longer.