Markets swooned on a spike in trade tensions, but investors should maintain equity positions as the U.S. economy is not in danger of an imminent recession.

After a one-month truce, the U.S.-China trade dispute has flared up again with another round of tit-for-tat trade restrictions and some heated rhetoric, impacting financial markets worldwide.

The latest trade barriers do not warrant making abrupt adjustments to equity portfolios, in our view, because the U.S. and global economies do not seem in danger of an imminent recession. The trade actions are actually smaller and more cautious than at first blush.

For investors with a 12-month or longer time horizon, we would hold U.S. equity exposure at the benchmark or Market Weight level in portfolios. Even though the expansion and bull market have lasted over 10 years, U.S. economic and equity fundamentals are relatively stable.

But the trade moves generate more global economic risks and uncertainties. The fact that this is occurring at a time when the recovery is admittedly long in the tooth can add to market volatility. A heightened level of vigilance is warranted.

Major indexes are holding onto gains 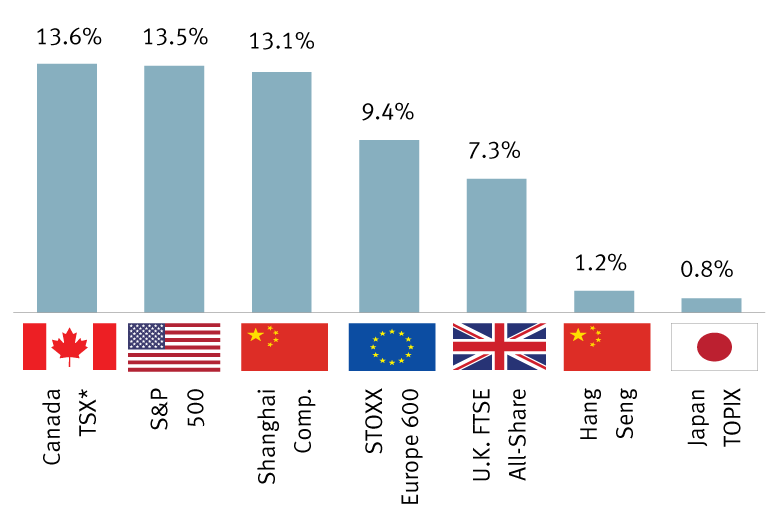 * The Canadian market was closed for a holiday on August 5, a day of declines for the global equity market, so performance for that index is captured through August 2.

Treasuries flashing caution; other indicators not so much

We continue to view market-based and economic indicators as the best guides of long-term equity market performance.

As the 10-year Treasury yield plunged 35 basis points over four trading sessions to 1.71% on Monday, part of the Treasury yield curve became more inverted, with short-term yields creeping higher than long-term yields by a greater magnitude. Recession risks have risen by this measure.

However, our other major U.S. recession indicators have yet to flash red or even yellow. Employment data, leading economic indicators, and the level of manufacturing new orders versus inventories are still signaling that GDP growth should persist for at least the next 12 months. In addition, consumer spending is elevated, confidence is high, and wages have been rising at a healthy clip for more than a year. This is notable because consumer spending drives almost 70% of U.S. economic activity.

One of our overriding concerns is that the longer the trade dispute persists, the higher the risk that consumer and business confidence will erode, which could shift the investment landscape.

As long as trade tensions don’t heat up to the degree that a global or U.S. recession becomes a credible threat, we think the equity market can work through this volatile period.

Corporate fundamentals are relatively stable with S&P 500 earnings growing slightly in the first half of the year on top of torrid growth in 2018. We think modest earnings growth will persist in the second half. We expect revenue growth to register in the mid-single-digit range in 2019, a respectable level on top of 8% growth last year. U.S. profits and revenues don’t rise in straight lines during expansion cycles, so we are not unduly troubled by slower growth rates this year.

The S&P 500 price-to-earnings ratio is somewhat elevated at 16.3x RBC Capital Markets’ 2020 earnings estimate of $175 per share, but it is not so high that it would preclude gains.

While heightened vigilance is warranted, we believe it’s too early to become overtly risk averse by reducing overall equity exposure much lower than the long-term strategic recommended level. Accordingly, we continue to recommend a Market Weight or benchmark position in U.S. equities.