After delivering three rate cuts in three meetings, the Fed now looks set to take a wait-and-see approach as it assesses the appropriate path ahead.

When the Fed began cutting rates in July, we expected that the rate cuts would continue until the yield curve inversions that had sparked much of the recent recession fears were reversed. And to that end, the objective has been achieved. As the chart shows, the 0.75% reduction in the fed funds rate has resteepened yield curves, including the benchmark 3-month-to-10-year curve that at its deepest inversion point in August was signaling a nearly 50% chance of recession within one year, according to the New York Fed’s model.

And the Fed seems to agree, signaling at the October 30 meeting that we’ve likely reached the end of this “mid-cycle adjustment” with Fed Chair Jerome Powell stating that the current stance of monetary policy is in a “good place,” while removing the Fed’s intent to “act as appropriate” with respect to interest rate adjustments from the official statement.

The widely anticipated pause in rate cuts appears to be in place, but for how long might it last? 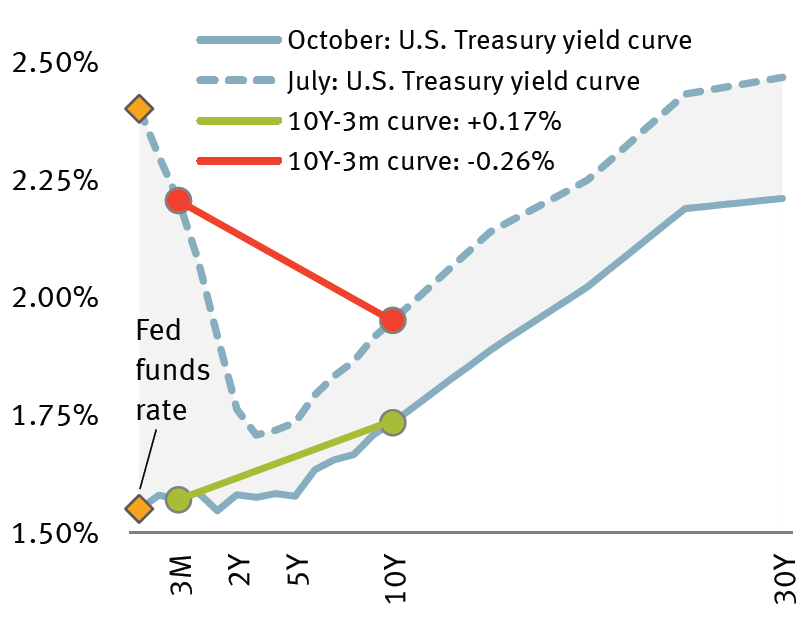 For the first time in a while, the markets and the Fed are on the same page. The Fed has one last meeting this year in December, with markets pricing a 75% chance that the Fed will take a pass on cutting rates. But even if the Fed can remain in hibernation through the winter without the markets poking it, the central bank will likely emerge to expectations for further rate cuts in the spring thaw.

As it stands, the market is looking at probabilities beyond 60% that the Fed will resume cutting interest rates at the March 2020 meeting, and, in our view, the bias is indeed toward further rate reductions.

Returning to the first chart, while yield curves have resteepened, it is only modestly so. We would also like to see a more sustained un-inversion before taking it as a positive signal that the growth outlook has steadied; the 90-day moving average of the 3-month-to-10-year yield curve remains inverted.

With respect to the outlook for yields, we don’t believe that yield curves can steepen much further from current levels given ongoing growth concerns. Therefore, we believe the 10-year Treasury yield, currently trading around 1.70%, will hold below 2% for the foreseeable future. And with further rate cuts likely in store, the trajectory is likely to remain lower, continuing a trend that has been in place for one year now when the benchmark 10-year yield peaked at 3.24%.

The first estimate of Q3 U.S. GDP released this week just prior to the Fed meeting provided a perfect encapsulation of the challenges the Fed—and the economy—faces while also justifying the Fed’s rate cuts to this point.

The first look at GDP showed that ongoing trade wars and generally elevated levels of uncertainty are fueling declines in business spending and investment—as indicated by the -0.40% drag from nonresidential investment—which contributed to headline GDP growth slipping below 2% in the first estimate. Business investment has now been negative for the last two quarters and for the first time since 2015–2016, which was during the last round of global recession fears.

On the flip side, consumers continue to provide the offsetting support to the global manufacturing slowdown with strong consumption numbers, partly as a result of lower interest rates as the national average 30-year mortgage rate has declined by more than 1% over the past year. This has led to a positive 0.18% contribution from residential investment, a metric that has been negative for the past six quarters. 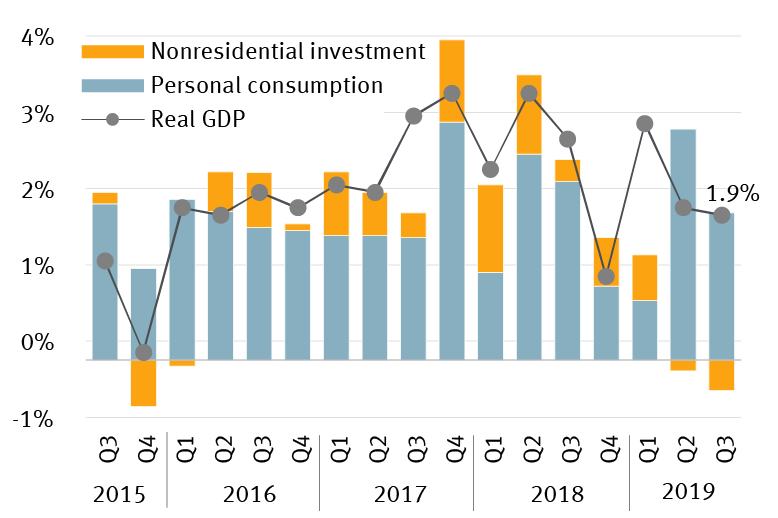 Like investors, the Fed is awaiting any type of resolution to a number of global issues. As noted in the official statement, policymakers plan to monitor developments as they assess the “appropriate path” for interest rates ahead. To us, that could mean the bar for further rate cuts is quite high.

The clock is still ticking

Our base case remains that the Fed’s efforts to this point to sustain the current economic expansion will be effective in stabilizing growth. But with short-term rates now just 1.75% away from the 0% levels that prevailed in the aftermath of the financial crisis, the Fed may be loath to deliver further stimulus absent an actual economic downturn as it has little room to do so—with the Fed’s reluctance itself potentially adding to recession risks.

It will take months, and even quarters, for the Fed’s recent easing efforts to work their way through the economy, giving the Fed a runway to judge the incoming data. But our view remains that yield curve inversions began the countdown on the current economic cycle. Though the Fed is moving to the sidelines, and some economic data has steadied, the risks remain to the downside, and investors should remain vigilant.