We look at the potential implications of impeachment for equities, based on past market performance and the views of institutional investors.

Impeachment in the House of Representatives, and a trial thereafter in the Senate, if they transpire, will be important, highly scrutinized events. This process can be very divisive, as was the case with President Bill Clinton’s impeachment. Or, in more extreme circumstances, it can leave an indelible imprint on the country, as when the Watergate scandal brought down President Richard Nixon.

But if history is a guide, the possible impeachment and trial of President Donald Trump are unlikely to have a lasting impact on the U.S. stock market. The Clinton saga barely nudged the market, while the more intense and drawn-out Nixon episode pressured the market for only a season. Both periods were marked by events outside of the Capitol that created stiffer headwinds for stocks.

We would not incorporate the impeachment process into asset allocation decisions unless it starts to weigh meaningfully on the U.S. economy and corporate profits—and we see no signs of this so far.

Economic growth has slowed, but remains sufficient for companies to increase profits moderately and for stocks to advance, in our view. These are the factors that drive the market over the long term, not Washington turmoil.

The political conflicts currently playing out in Washington do not figure prominently in the concerns of institutional investors, according to a recent RBC Capital Markets survey of institutional clients. A majority of respondents viewed a scenario in which Trump was impeached by the House and subsequently acquitted in a Senate trial as market-neutral. And of the top five items on respondents’ worry lists, only one—the possibility of a Democratic sweep of both houses of Congress and the presidency—was directly related to the 2020 election.

Presidential impeachment and trial are largely political processes, but they also have legal dimensions. Previously they’ve included a significant amount of rancorous rhetoric as well as political and legal wrangling, which captured media and public attention.

This go-around, the developments will be magnified by a torrent of internet media coverage and social media disclosure. And the legal maneuvering could be more intense, given that Trump is very comfortable with—and perhaps even relishes—aggressively litigating.

It seems likely to us that House Democrats will have the votes to impeach the president for the following reasons. They control the chamber, it takes just a simple majority of members, and the “unofficial” vote tally is already pointing in this direction. House Democrats have signaled the impeachment vote(s) could come before year end.

Impeachment equates to bringing formal charges against the president for committing “Treason, Bribery, or other high Crimes and Misdemeanors,” as set forth by the Constitution. The terms “high crimes and misdemeanors” are intentionally broad and give Congress wide latitude, according to legal scholars.

The possibility of Trump being impeached is well known by institutional investors, so we don’t think this would jolt financial markets—that is, unless unforeseen developments change the political and/or legal dynamics between now and then.

Once a president is impeached (formally charged with one or more offenses), the Constitution dictates that the process moves to the Senate where a trial takes place to determine whether the president is guilty of the charge(s). The chief justice of the Supreme Court presides over the trial and the senators serve as the jury.

In the Senate the hurdle is higher. A guilty verdict, which removes the president from office, requires a two-thirds supermajority, or 67 of 100 senators. There are 47 Democrats in the Senate, so conviction would take another 20 Republicans to join them, or more if a few “red state” Democrats were to break ranks.

While some Republican Senators have been sharply critical of Trump’s interactions with Ukraine and the activities of his proxies, we doubt many Republicans would line up against him unless new developments change the political and legal landscape.

Various polls show the president’s support among Republican voters remains high. Sentiment about the economy and personal finances—among Trump’s signature issues—are also quite elevated among registered Republicans, according to a Bloomberg survey. 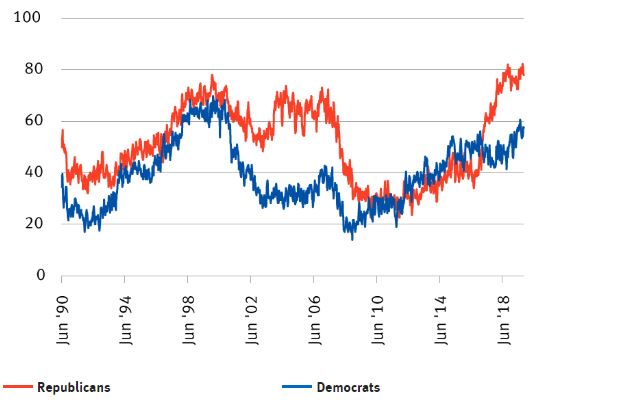 Currently, Republicans’ attitudes toward the economy and personal finances are much more positive than Democrats’ attitudes.

Polls are important in this regard. While Clinton maintained his approval rating throughout his impeachment process, Nixon’s public support eroded over the course of the Watergate saga, from a high of 68 percent down to 24 percent soon before he resigned, according to Gallup. If Republican voters stick with Trump, we think most Republican Senators will do likewise. But if Trump loses a large share of Republican voters’ support throughout the process, anything goes.

RBC Capital Markets’ U.S. Equity Strategy team asked its institutional investor clients how the following scenario would impact the equity market: impeachment of Trump in the House, followed by acquittal in the Senate. A majority, 57 percent, said it would be a market-neutral event, while 30 percent said it would be bearish and seven percent rated it very bearish; the remaining respondents said it would be positive.

When it comes to the potential impact on the U.S. economy and stock market, there are only two modern-era comparisons. The Clinton impeachment inquiry left the market relatively unscathed, while the impact of the Nixon Watergate scandal is more difficult to unravel. Importantly, in both cases, other outside factors weighed on the market significantly.

During Clinton’s impeachment and trial, which spanned from mid-1998 to early 1999 and ended with acquittal, the U.S. economy boomed. Real GDP growth averaged 5.2 percent q/q annualized, core inflation was tame, consumer confidence was high, and S&P 500 profits rose modestly. Clinton’s approval rating was 63 percent or higher throughout the process, according to Gallup.

At the time, the market was much more negatively impacted by the emerging-market debt/Russian default crises and the related collapse of a large U.S. hedge fund, Long Term Capital Management (LTCM), than it was by the Clinton saga.

At its worst point, the S&P 500 briefly fell 19 percent in mid-1998. It rallied back to a new high in short order and then continued to advance.

The Watergate scandal in the 1970s, which ultimately engulfed Nixon, included an initial step that is not set forth in the Constitution. First, a special Senate committee investigated the role of the president and White House staff in Watergate. The House impeachment inquiry began later.

Watergate developments triggered periodic selloffs in equities and were a headwind for the market until late in the process.

But at the time, the economy and stock market were roiled much more by an unrelated crisis. The Arab oil embargo began right as the Senate Watergate investigation was heating up.

The embargo inflicted pain on an already-fragile economy and ratcheted up pressure on household finances. Oil prices skyrocketed four-fold, rising from $3 to nearly $12 per barrel. Adjusting for inflation, this is equivalent to prices jumping from $17 to $61 per barrel in today’s dollars. Of course, gasoline prices soared as well.

U.S. inflation gauges had been trending higher when the embargo hit. Inflation increased significantly during the crisis and continued to climb further afterward. Even core inflation (which excludes food and energy) spiked, reaching 11.9 percent in September 1974, despite the embargo having ended six months earlier.

The moral of these stories from the Nixon and Clinton eras is that developments outside of the impeachment process—the oil embargo in Nixon’s case and the emerging market debt crisis/Russian default/LTCM bailout in Clinton’s—had much greater impacts on the stock market than did either of the Washington dramas.

The big unknown about the possible Trump impeachment and trial is how the process might affect the 2020 election. Whether it would increase the probability of a Democratic Party sweep is an important question for the U.S. equity market, given some S&P 500 sectors could face challenges under this scenario.

According to RBC Capital Markets’ industry analysts, Health Care, Energy, Financials, and large internet firms would be at greatest risk of new regulatory pressures if the Democratic Party wins the White House, House of Representatives, and Senate.

This assessment is largely echoed by RBC Capital Markets’ institutional clients, according to a recent survey.

The election is starting to keep institutional investors up at night. RBC Capital Markets’ survey also identified the five issues that top their worry list, one of which is related to the election while the others have been worries for quite some time: (1) trade war/tariffs, (2) the 2020 elections, a Democratic sweep, an Elizabeth Warren presidential win, (3) Trump and Trump’s tweets, (4) monetary policy and rates, and (5) geopolitical risks and war.

Despite potential sector challenges, RBC Capital Markets' U.S. Equity Strategy team believes there will be attractive investable themes in a variety of 2020 election scenarios. Once the caucus and primary season begins in February and March 2020, the election landscape and related investment themes will start to take shape.

We do not advise changing asset allocations in portfolios based solely on developments in Washington. While the political and legal proceedings could touch off periods of volatility, we think the market will continue to be driven by underlying economic and corporate earnings fundamentals over the mid and long term.

Staying focused on the economic indicators is, in our view, the most effective way of gauging the market’s response. If the impeachment process and possible trial become problematic for the economy by any meaningful degree, it will show up in the data.

As long as the trajectories of the global and domestic economies and corporate earnings remain at least in slow-growth modes—as they are now—we are comfortable holding U.S. and global equities at the Market Weight level in portfolios.