We see higher ground for equities in 2020. We are also more cautious than at any time in the past decade.

We have a constructive outlook for stocks for 2020. The economic expansion should have further to run, in our view, underpinned by accommodative credit conditions everywhere, the robust good health of the American consumer, easing U.S.-China trade tensions, and the likelihood most developed economies will deliver some fiscal stimulus. Corporate earnings will likely increase, as should dividends and stock buybacks, pushing share prices higher.

All of this should transform the gloom of 2019 around trade and recession talk into a less fraught outlook for the economy. What it shouldn’t change is the investor’s commitment to vigilance.

U.S. recessions have historically been associated with equity bear markets in all the developed economies, but the start of the next U.S. recession looks to us to be a year or more away. However, there are at least two complicating factors facing investors.

Bull markets don’t die of old age, they are killed off by U.S. recessions 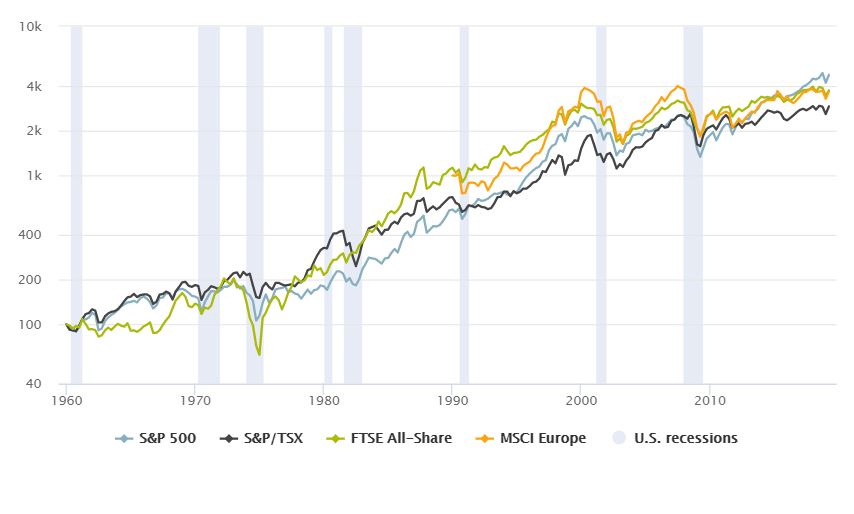 First, while renewed monetary/fiscal stimulus is breathing some extra life into the longest-ever U.S. economic expansion, in our view, this is unlikely to kick GDP growth into a higher gear that would offer the prospect of several successive years of above-average earnings growth.

Second, bull markets have usually peaked before a recession starts—sometimes as much as a year in advance. So, even conviction that the next recession won’t arrive before 2021 still leaves open the possibility the market may set its peak for this cycle in the coming 12 months.

Our view has a bullish bias with new highs and moderate returns forecast for the coming year. But right alongside this is a heightened need for caution acknowledging that the late cycle carries particular challenges for both the economy and the stock market.

There are reasons to be bullish

1. The next recession still looks some ways off

Monetary conditions remain extremely accommodative. The arrival of “tight money” (i.e., prohibitively high interest rates simultaneous with a sharply reduced willingness of banks to lend) has preceded every U.S. recession but one since the 1930s.

Money is not tight. Borrowing rates are very low and could go lower. The Fed has cut three times and is committed to buying $60 billion of Treasury bills each month until at least June. The European Central Bank (ECB) has cut its base rate to minus 70 basis points and reinstated its large bond purchase programme (i.e., quantitative easing, or QE). The Bank of Canada has struck a dovish tone indicating it might cut. The Bank of Japan remains in full-on QE.

Not only is policy set at “very accommodative,” but both lenders and borrowers report credit is plentiful and easy to access. And policy is likely to remain supportive. In Europe, just-retired ECB President Mario Draghi’s parting gift of a rate cut and stepped-up QE gives incoming President Christine Lagarde some policy breathing room, while in the U.S., the Fed is thought to prefer keeping policy moves to a minimum after Feb. in a presidential election year.

The other tailwind for the U.S. economy (and the global economy) is the robust good health of the American consumer who shows no signs of running out of steam. The unemployment rate is sitting at a half-century low. The U.S. Labor Department reports seven million jobs are currently unfilled (versus six million unemployed). Unemployment claims continue to trend lower—companies are reluctant to lay anyone off, even an unsatisfactory employee, because hiring a replacement is extremely difficult. Labour tightness has pushed average hourly earnings gains up to 3.5 percent from just two percent two years ago. 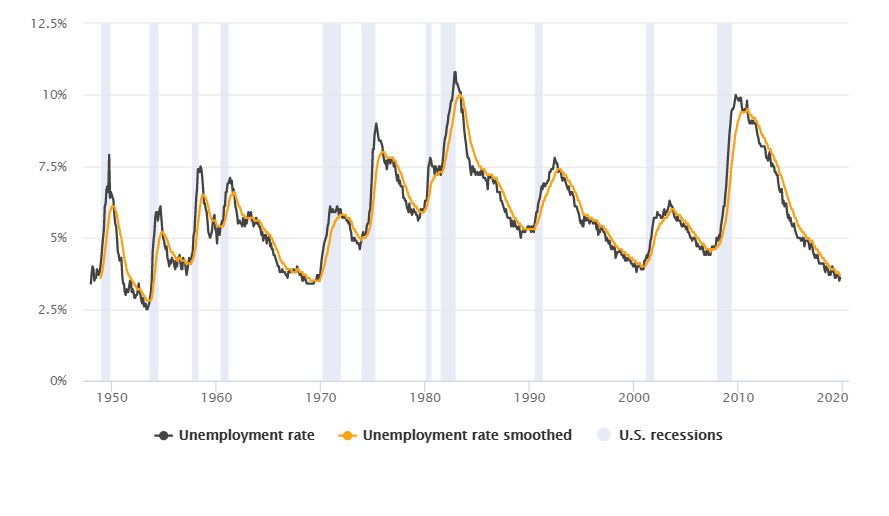 High savings, house prices comfortably back near their pre-crisis peaks, as well as the tight employment picture have boosted confidence. The consumer continues to spend at a rate sufficient to offset any weakness from other sectors.

Consumers elsewhere are also reasonably upbeat. And they are likely to remain so through 2020 at least. The recently elected government in Canada has indicated another middle-class tax cut will be quickly forthcoming. The UK’s Labour Party has included an election plank that promises to mandate a 32-hour work week within a decade, and entailing no loss of income. The U.S. election season is almost certain to be rife with middle-income tax cut and spending promises.

In order for the U.S. to slip into recession something has to seriously dent the condition of the consumer. Historically, there have only been two “brakes” robust enough to effect this. One would be a tax increase—possible if Congress becomes more decidedly Democratic, but probably not sufficient to trigger a recession if conjoined with a middle-income tax cut and new spending. That leaves the eventual arrival of tighter credit conditions as the most plausible route to recession from here.

As discussed above, money is not “tight” nor are central banks showing any desire to head in that direction. If the Fed were to change its mind, we believe it would take some considerable rate-hiking before the economy succumbed. Since the federal funds rate came into existence in the early 1950s there has never been a recession before the fed funds rate has exceeded the “nominal” growth rate of the economy (i.e., the growth rate before adjusting for inflation), which today is 3.75 percent year-over-year. That is the equivalent of eight quarter-point rate increases above the current fed funds rate, which sits at 1.75 percent. 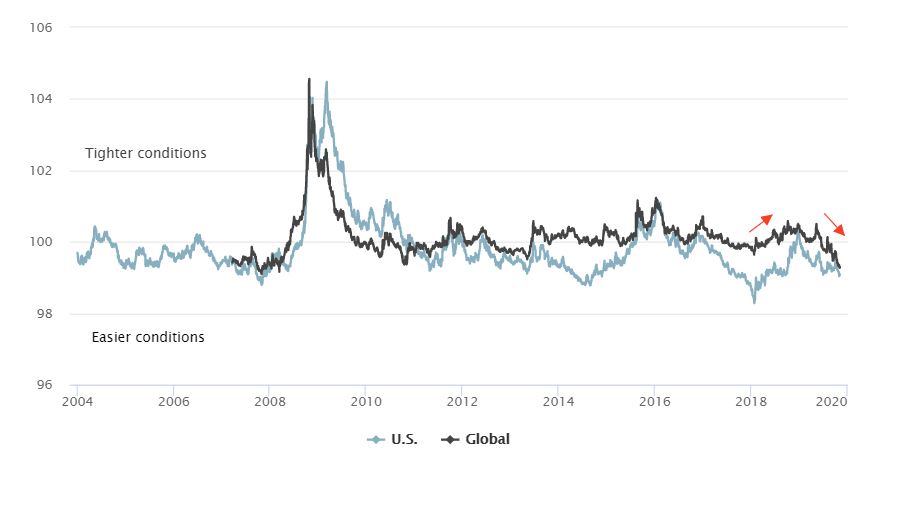 3. The market has displayed few signs of vulnerability

The stock market’s “internals” still look good to us. Consensus earnings estimates are now more reasonable and look likely to stabilize soon. Valuations in North America are not outlandish, while they are cheap in Europe and Japan.

Importantly, the breadth readings of the market are confirming what the indexes have been doing. In other words, as the broad averages have been moving to new highs, so too have the majority of stocks. For a number of months prior to most bull-market peaks that relationship breaks down: the index gets carried higher by a dwindling number of high-performing, large-cap favourites while a growing majority of issues are either treading water or moving into outright downtrends. No such divergence has appeared, lending confidence to the idea that this market advance has further to go.

There are reasons to be cautious

Last summer, short-term interest rates finished above long-term rates. Normally the opposite is true. The previous time such an “inversion” occurred was Jan. 2006, 23 months before the start of the recession in Dec. 2007. Since World War II, the yield curve has inverted 10 times (not counting the latest instance). On nine of those occasions, a recession followed on average 14 months later.

RBC Capital Markets, LLC Chief U.S. Economist Tom Porcelli points out the yield curve usually inverts because the Fed is rapidly raising short-term interest rates to cool off an overheated, inflation-prone economy. This time, instead, collapsing long-term yields did the deed—the 10-year Treasury yield fell from 2.60 percent all the way down to 1.45 percent in just four-and-a-half months, plunging below the fed funds rate in the process.

Long-term yields fell because Japanese and European investors were barrelling into U.S. Treasuries rather than accepting deepening negative yields at home. So, unlike past inversions, this one was not signalling a painful tightening of credit conditions in the U.S. As noted above, credit remains plentiful and inexpensive.

While it’s hard not to agree with this interpretation, we would note that compelling, persuasive arguments that “this time it is different” usually appeared after previous inversions—and typically recessions arrived nonetheless. Some economy watchers are taking comfort from the fact the yield curve de-inverted in Oct. However, we do not think this constitutes an “all-clear.” Such reversals have almost always occurred before the associated recession has begun.

Cracks are appearing for the first time in a decade 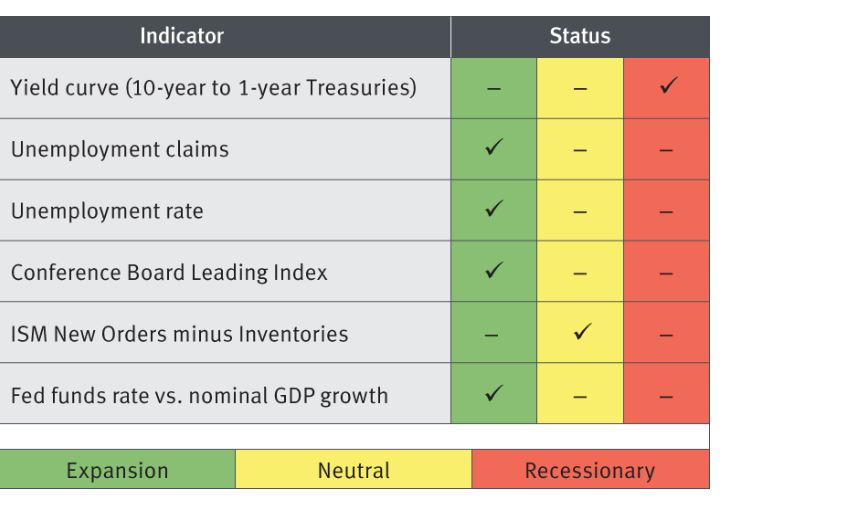 For our part, we are treating this occurrence as a “shot across the bow” for equity investors—one that should provoke a heightened degree of vigilance.

The shape of the yield curve is just one of six indicators we use to gauge the probability of the arrival of a U.S. recession. Four of the six (unemployment insurance claims, the unemployment rate, the Conference Board Leading Economic Index, and the gap between the fed funds rate and the nominal GDP rate) are all still giving the economy a “green light.” That said, they are all much closer to flashing red than they were a year ago. However, it’s not a foregone conclusion they will turn negative; instances of close calls followed by a rebound are common enough.

But if more indicator pins were to topple in the coming months, our caution would intensify and defensive inclinations grow. Virtually all bear markets have been associated with U.S. recessions, and usually the stock market has set its final peak for the cycle some months before the recession begins. So, the inverting of the yield curve in Aug. can be seen as opening the door to the potential arrival of a bull-market peak for the first time in 10 years.

Our estimate for U.S. GDP growth next year is 1.75 percent, much closer to zero than the 2.5 percent to 3.5 percent run-rate of prior cycles. Occasional negative quarters inducing more frequent bouts of market volatility can’t be ruled out. The growth rates in Europe and Japan, if anything, will be weaker, in our estimation. It’s unlikely that corporate guidance will put investor angst about slow growth to rest.

Valuations are full enough, at least in the North American markets, that they don’t leave much room to absorb either GDP growth or earnings disappointments.

Invested but not asleep

For 10 years we have been well served by the idea that portfolios should maintain at least a full, target-weight exposure to equities as long as there was no U.S. recession in sight. We continue to be of that view.

Accommodative monetary policy, some additional fiscal stimulus, and a confident consumer should keep the U.S. and most other developed economies growing through next year and probably longer. That should engender growth in corporate earnings, dividends, and stock buybacks. Share prices should follow all these higher.

We recommend portfolios carry equities at a predetermined, long-term target weight. However, without the prospect of a return to more robust economic and earnings growth, we have become less tolerant of portfolios carrying an overweight or above-target commitment to stocks whether by design or as a result of strong markets.

If and when the weight of the evidence eventually moves the probabilities of a recession/bear market to unacceptably high levels it will be tempting to rationalize away the bad news. When that time arrives, that temptation should be resisted.