Are the U.S. and Iran on a collision course?

Are the U.S. and Iran on a collision course?

While a diplomatic off-ramp may emerge for the U.S. and Iran, the hawks appear to be circling. Oil's risk premium looks set to take center stage.

Helima Croft is the Global Head of Commodity Strategy at RBC Capital Markets. She specializes in geopolitics and energy, leading a team of strategists who cover energy, metals, and commodity investor activity. Prior to working in the investment industry, she received her PhD from Princeton in economic history and was a Central Intelligence Agency analyst. She is a member of the National Petroleum Council, a Life Member of the Council on Foreign Relations, is on the Board of Directors for the Atlantic Council, and is a CNBC contributor.

Though trade war concerns have roiled the oil market at times recently, we continue to contend that events in the Middle East warrant very close attention.

While many oil market participants see the recent security incidents as business as usual for the region, we see an abundance of escalation risks in large part because the U.S. sanctions are subjecting Iran to almost unprecedented economic pain.

U.S. President Trump continues to insist publicly that he is not seeking regime change in Iran, rather merely a better nuclear deal. However, from Tehran’s vantage point there is probably an extremely thin line between measures designed to cause an economic collapse and explicit calls for new leadership. 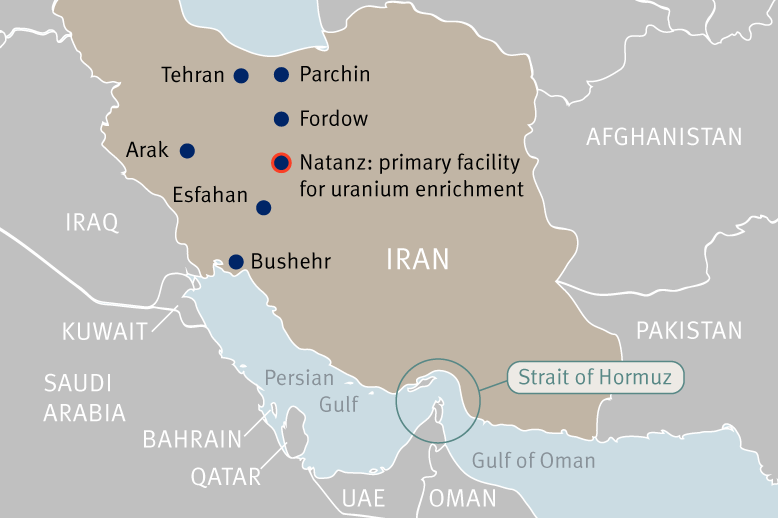 If Iran resumes spinning second-generation centrifuges at Natanz, it could significantly shrink the timeline to assemble a crude nuclear device.

If Washington holds the line on the sanctions and sticks with its hardline conditions for economic relief, it is difficult to envision a diplomatic breakthrough emerging in the near term, particularly given the marked preference of Iran’s supreme leader, Ayatollah Ali Khamenei, for showing strength and avoiding concessions during a crisis.

While both the White House and Iranian leadership insist they do not want a war, we maintain that there remain several red lines that if crossed could be a catalyst for a military conflict.

In our view, a precondition for de-escalation is a resumption of some oil export waivers, enabling Iran’s government to stay afloat and stave off social unrest. That said, the White House seems reluctant to frontload any economic concessions to kick start diplomatic talks; thus, we see no end to the cycle of escalation in the near term.

Depending on the exact outcome, an increasingly worrying security crisis could unfold in a manner not yet fully appreciated by the oil market.

We believe that escalation of this crisis will likely be the order of the day as long as the U.S. continues its “maximum pressure” policy and insists that Iran completely abandon its revolutionary agenda in order to receive economic relief.

The White House’s decision in April to eliminate all exemptions for importers of Iranian oil has dealt a crippling blow to Iran’s economy. According to the International Monetary Fund, oil accounts for almost 80 percent of Iran’s tax revenue. The country has already lost $10B since the U.S. sanctions took effect in November 2018.

Millions of barrels per day, monthly, since April 2018 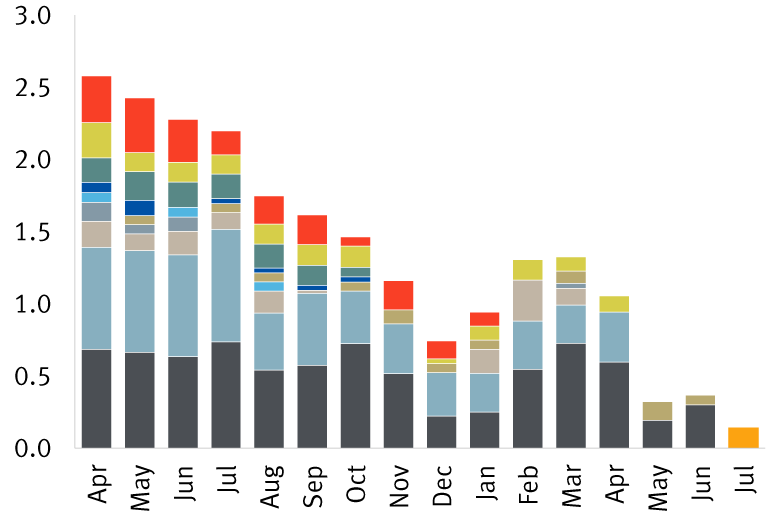 U.S. sanctions and the removal of exemptions have crippled Iran’s oil exports.

Hardline elements in Iran have become ascendant since the U.S. exited the 2015 JCPOA nuclear deal (Joint Comprehensive Plan of Action) last year, and they have vowed a more forceful response to the U.S. measures that they contend are designed to cause an economic collapse and trigger regime change.

Qassem Soleimani, commander of the elite Quds Force of Iran’s Revolutionary Guard, and described by a former CIA officer in Iraq as the “single most powerful operative in the Middle East,” may not want a full-blown shooting war, but he may be willing to push the region to the brink of one to get the U.S. and its allies to reconsider their course of action.

U.S. Secretary of State Mike Pompeo detailed 12 demands in May that Iran would need to accept in order to receive relief from sanctions and normalize relations with the U.S. If accepted, they would essentially end the revolutionary nature of the Iranian regime. Hence, we believe they are a non-starter for Supreme Leader Khamenei, who is the ultimate decider on Iran’s nuclear program and its military posture. Enmity toward America is one of Khamenei’s core organizing principles, as is a belief that one should never compromise under pressure.

In response to Washington’s maximum pressure campaign, Tehran has raised the specter of once again enriching uranium at levels close to weapons grade and spinning the high-speed centrifuges that will sharply shrink the time needed to assemble a crude nuclear device.

The key thing to watch, in our view, will be the pace at which Iran ramps up enrichment. Prior to signing the JCPOA deal, Iran was enriching uranium at the 20 percent  level, which is 90 percent of the way to weapons grade. Hence, we believe a resumption of 20 percent enrichment would represent a critical development that would likely precipitate a very strong response from Washington and its regional allies such as Israel.

Iran’s path to a nuclear weapon 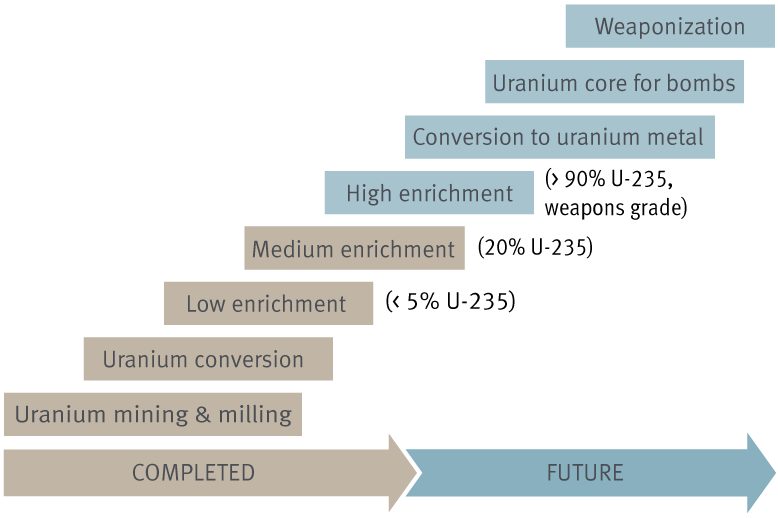 The type of centrifuges Iran uses will also be critical. Iran is allowed to enrich uranium with its first-generation IR 1M devices, but it has much faster second-generation centrifuges under lock and key at the Natanz enrichment facility. If it breaks the seals and resumes spinning the IR 2M, Iran will be able to significantly shrink the timeline to reaching “breakout” capability and being able to quickly assemble a crude nuclear device.

Also worrisome, some senior officials have hinted that Iran could exit the 1968 Nuclear Non-Proliferation Treaty (NPT). While the NPT recognizes the “inalienable right” of states to research, develop, and use nuclear energy for civilian purposes, signatories agree to forgo developing or acquiring nuclear weapons. Hence, an Iranian withdrawal would be an explicit signal that its nuclear programs have a military dimension, and could cause a security crisis, one that many in the oil market had seemingly written off or at least shrugged off for now.

A “Guns of August” scenario is by no means inevitable, as Trump continues to display an aversion to Middle East military entanglements. Yet, there are U.S. officials who appear willing to push the envelope to the brink of war in order to advance their strategic objectives. For example, U.S. National Security Advisor John Bolton has spearheaded the effort to isolate Iran and pushed for coercive policies, and has never hidden his desire to see the current Iranian government fall.

Some seem willing to risk an actual war, believing it would be short in duration due either to an overwhelming conventional military advantage or a perception that their adversary does not have the stomach for a protracted, asymmetrical struggle. In an environment where lines of back channel communication are closing, a “fog of war” scenario can take hold and major miscalculations can occur.

There is a corner of the oil market that dismisses the latest Iran warnings as a continuation of the overhyped fear-mongering machine. These voices point to the absence of a prior conflict as evidence that one will not occur in the future.

From our vantage point, the current situation feels qualitatively different due in large part to who is sitting in the seats of power in the U.S. and Iran. The hawks appear to be in ascendancy and individuals urging restraint have seen their influence eroded.

While Trump has insisted that he only wants a more robust nuclear deal, events surrounding the crisis may force him to use military options.

Iran would have a very hard time closing the Strait of Hormuz due to the presence of the U.S. Navy’s Fifth Fleet in Bahrain. The strait is the world’s most important energy chokepoint, with around 30% of the world’s seaborne barrels traveling through the narrow waterway every day. Its security is of paramount importance for Middle Eastern energy exporters and the U.S.

However, despite the Fifth Fleet’s presence, Iran has the strategic depth to stage one-off attacks on vessels—and has already been accused of doing so—not just in the strait but also in the relatively open waters of the Persian Gulf and the Gulf of Oman, and can leverage both its proxies and asymmetric capabilities.

While a diplomatic off-ramp may yet emerge, the hawks appear to be circling, which leaves oil’s risk premium set to take center stage.

We believe the current oil price does not really reflect the degree of risk that potential incidents represent and that an Iranian attack resulting in the death of U.S. military personnel or a major nuclear restart (especially a withdrawal from the NPT) would provoke a robust U.S. military response, including air strikes on Iranian targets such as the Natanz enrichment facility.

Trump continues to warn Tehran against further escalations and is vowing to impose additional sanctions, but at the same time insists he is willing to restart talks. We see slim chances of a diplomatic breakthrough in the near term as the Iranian leadership continues to insist on the lifting of sanctions as a precondition for returning to the negotiating table.

A safe harbor may yet emerge—especially if Tehran takes up Trump’s offer for negotiations—but it does not appear to be on the immediate horizon as we navigate these dangerous waters.