Following a stellar 2019, with the S&P 500 delivering its second-best annual return of this bull market cycle, equity markets have received a geopolitical wake-up call to begin 2020.

2019 was the second-best return of this bull market cycle

S&P 500 annual performance (not including dividends) 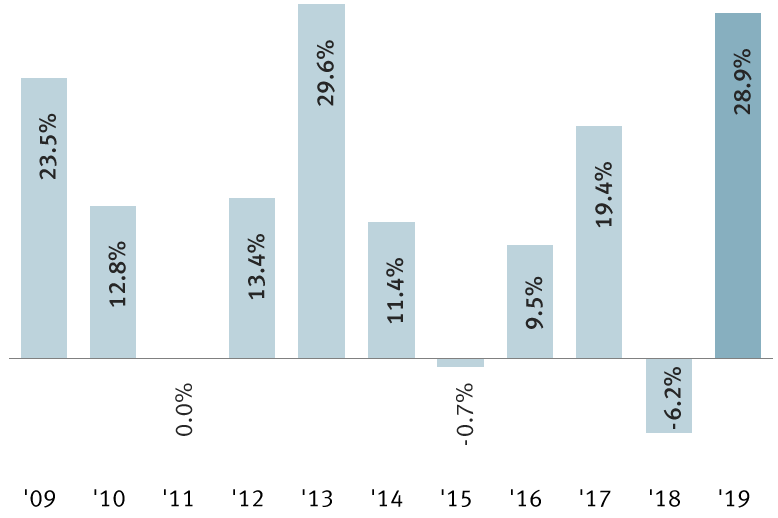 The U.S. drone strike that targeted and killed Iran’s top general, and Iran’s retaliatory ballistic missile strikes on U.S. military bases in Iraq, put equity markets on edge at times—that is, until details about Iran’s strikes emerged and both sides attempted to de-escalate.

Overall, financial markets have not reacted much to the U.S.-Iran conflict despite the serious nature of the developments and meaningful risks that linger. Are they too complacent?

We’ve seen this story before

The equity market’s relatively restrained response to a geopolitical clash is actually the norm rather than the exception.

The S&P 500 fell 6.2%, on average, in 18 major post-WWII military conflicts or hostilities that we evaluated. While that level of decline is nothing to dismiss, it’s well within the bounds of a typical, modest pullback in many scenarios that often confront markets, including scenarios that have nothing to do with military clashes.

* Other economic and monetary policy factors negatively influenced the number of days it took the market to get back to even; this is not counted in the average number of trading days back to even.

Our study of previous geopolitical conflicts indicates the market’s reaction lasted an average of only 30 days, even though many of the actual events lasted longer—sometimes much, much longer.

At times equities weakened during the run-up to a geopolitical conflict as tensions mounted, and recovered soon thereafter.

As the table shows, a handful of prior events were more difficult for the market to absorb, with the S&P 500 declining in the low-to-mid-double digits. In these instances, which are highlighted in red, two of the four acts of war were in the Middle East: in 1990 when Iraq invaded Kuwait and seized its oilfields, and back in 1973 during the Yom Kippur War and Arab oil embargo.

It’s too early to tell if the U.S.-Iran conflict has sufficiently de-escalated to the degree that market risks have largely lifted.

According to RBC Capital Markets’ commodity team, which has a focus on Middle Eastern oil, “The Iran standoff remains far from over. As long as Iran remains under crippling sanctions—with no realistic prospect of relief—the diplomatic track seems closed off. The killing of General Soleimani will also likely bolster hardline aversion to making significant concessions to Washington on curbing Iran’s nuclear activities, ending support for armed proxy groups, and halting its ballistic missile program … pay particular attention to Iran’s nuclear restart as this remains another key redline for President Trump and his Israeli counterpart Benjamin Netanyahu.”

When it comes to geopolitical risks, our longstanding advice is that investors should assume that such events can crop up occasionally and push the equity market into a temporary 5%–10% pullback or, in rarer cases, into a longer-lasting correction of greater magnitude.

Ultimately, however, we believe it’s the economic and earnings trajectories that set the pace for the global and U.S. equity markets. Federal Reserve policy also plays an important role because it can help or hinder economic expansions.

We think U.S. GDP and corporate profits will grow at least modestly in 2020. We anticipate the Fed will stand pat with interest rates for the time being, maintaining its accommodative stance. All of this should set the table for moderate equity returns in 2020—albeit with periods of consolidation and volatility along the way.

The S&P 500 is trading at 18.8x RBC Capital Markets’ 2020 earnings forecast of $174 per share versus a five-year average of 16.7x. While the valuation is elevated and has less room to expand, it is not unreasonable considering the ultralow interest rate environment. Lori Calvasina, RBC Capital Markets, LLC’s Head of U.S. Equity Strategy, has a year-end S&P 500 target of 3,460, which would represent a 7.1% annual gain.

We are comfortable holding equities at the Market Weight or benchmark level in portfolios as long as most of our recession indicators continue to signal that the U.S. economic expansion will persist, and that the trajectories of the global and U.S. economies as well as corporate profits are not materially threatened by the conflict between the U.S. and Iran.