After a brutal week for stocks, markets expect a flurry of Fed rate cuts. But already low Treasury yields are only moving to new record lows.

What a difference a week makes. Since the S&P 500 peaked at 3,386 on Feb. 19, it has fallen by approximately 12 percent over the past seven trading sessions as the spread of the coronavirus picked up outside of China. While 10 percent-type corrections are a normal occurrence across any economic cycle, 10 percent corrections over the course of barely a week are less so. In the some 10,000 trading days since 1980, there have only been 14 such week-long periods of losses exceeding 12 percent.

Too far, too fast?

Stock pullback has been swift, but only to 4-month lows 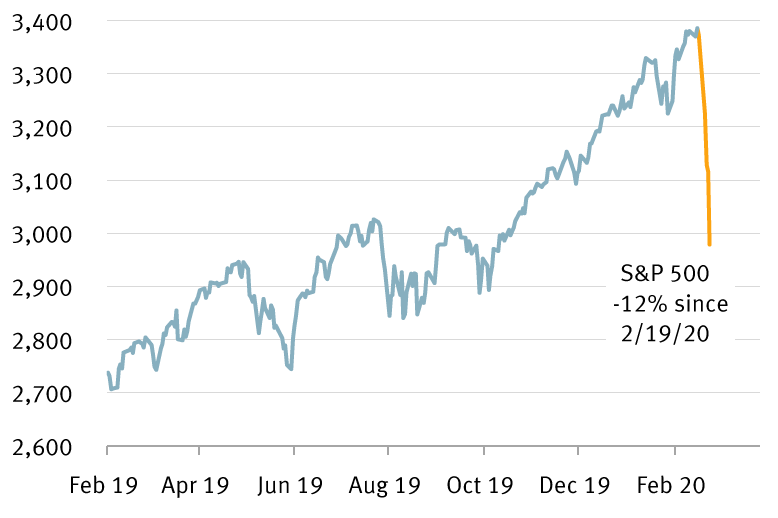 The impact of the coronavirus on corporate earnings and sales, whether among U.S. multinationals or companies headquartered elsewhere, will take a long time to sort out even if the contagion begins receding by early summer.

As companies begin to estimate the financial hit, this disease is proving far more difficult to assess than even the topsy-turvy trade risks between the U.S. and China were last year. The spread of the coronavirus carries with it many unknowns for multinational companies with complex global supply chains or meaningful sales in the hardest-hit countries.

After conducting a stress test based on coronavirus risks, RBC Capital Markets now estimates the downside risk to S&P 500 earnings in 2020 is at $170 per share, which is $2 lower than it estimated before the virus started spreading outside of China. Currently, RBC Capital Markets’ official forecast remains at $174 per share and the consensus estimate is at $175. We think both of those estimates are vulnerable to moving down toward the $170 level over time.

Regardless, revenues and earnings of S&P 500 companies as a whole are actually more domestically-geared than a lot of major indexes outside of the U.S. So much of the impact on S&P 500 companies will come down to whether the spread of the virus is contained domestically, and how well U.S. economic fundamentals hold up.

And if that’s not enough for investors to process, the risk-off sentiment, the flight to safety, and the subsequent expectations for global central banks to take action in the form of interest rate cuts have taken U.S. Treasury yields to all-time record lows. The benchmark U.S. 10-year Treasury yield, off of which much of the financial universe is priced in some way, shape, or form, has traded as low as 1.24 percent, having opened the year at nearly 2.0 percent. Globally, the entire German government yield curve is back below zero percent, and the global stock of negative-yielding debt is once again on the rise, nearing $14 trillion.

Global central bank easing in 2019 was supposed to set the stage for a steadier 2020. With that now off the table, what might the central bank response be to the economic risks from the coronavirus, and do they even have the right tools?

Amidst a global crisis, investors are once again looking to global central banks to save the day. Unfortunately, they are likely to find that not only is monetary policy not the right tool in the face of potentially sharp declines in global demand and disruptions in global supply chains caused by the coronavirus, but most banks simply have limited room to act. Europe? The European Central Bank (ECB) policy rate is still -0.50 percent. The UK? Just 0.75 percent. China has been the most aggressive in boosting lending and adding stimulus for local businesses, but lacks the power to boost global demand.

Which leaves the Federal Reserve. Though historically low, the Fed’s policy rate remains relatively high at 1.75 percent, and markets are pricing that the Fed will need to be the bank to provide the support. Markets are now expecting three full rate cuts this year to a range of 0.75 percent to 1.00 percent, with a 50 percent chance that the Fed cuts a total of four times. In terms of timing, the market now expects that the Fed will deliver at least one rate cut at the Mar. 18 meeting. However, the bigger issue, we fear, is that the Fed may be past the stage of policy “mid-cycle adjustments” and “insurance cuts.” At this stage, a return to the zero percent to 0.25 percent range may be the only option to provide the necessary backstop and economic boost. 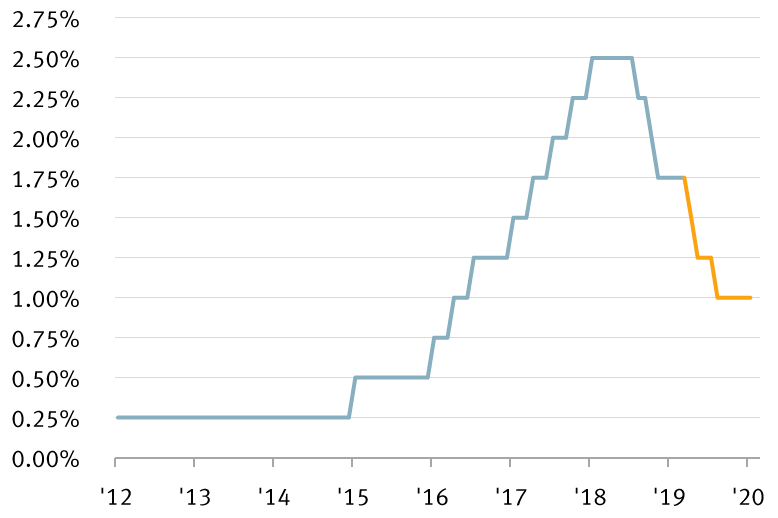 Regardless, in the face of elevated uncertainty, cheaper money through the channel of lower rates likely isn’t the answer to countering the negative economic impacts of the coronavirus; however, central bank policy can still serve to boost economies and markets via the sentiment channel. Though central banks may harbor doubts about the efficacy of lower interest rates, they will have little choice but to act if sentiment remains weak.

The answer, of course, is fiscal stimulus, and we look for some governments to move aggressively should the situation continue to deteriorate. China already is.

In the U.S., record low Treasury yields are an unwelcome sight for investors already struggling to find income, but the question is still, how low can they go? Despite the coronavirus being a global risk, U.S. yields are actually falling faster than their global counterparts. But this is actually not a new phenomenon, U.S. yields have been converging with global yields at a steady pace since the end of 2018.

And it’s an easy story to tell. In 2011, the ECB began cutting rates, eventually moving into negative territory as the economy struggled. In the U.S., the Fed stayed patient, started raising rates only in 2015, and then only gradually as the economy continued to recover, allowing U.S. yields to open up a sizeable gap to the rest of the world.

Now at year 11 of the current business cycle, and as the fiscal stimulus of tax reform fades, perhaps it’s no longer realistic to expect the U.S. economy to so handily outperform the rest of the world. It’s not outside the realm of possibility that the 10-year Treasury yield joins much of the developed world below one percent, or even closer to zero percent, based simply on historical relationships.

What goes up, must come down 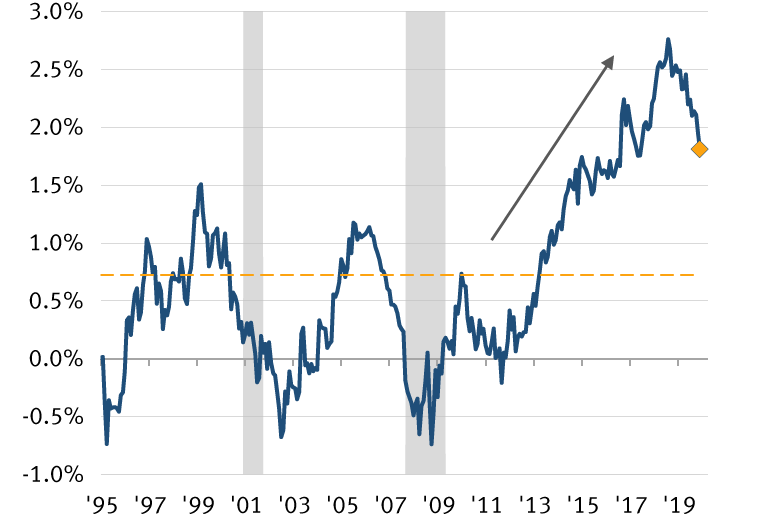 There’s simply little precedence for these types of events. The best case is that the coronavirus fears fade as quickly as they appeared. But as long as the underlying U.S. economic fundamentals remain intact, we still anticipate most equity markets will finish the year in positive territory. Staying invested is often the best strategy, and that is likely to remain the case. But more equity market volatility—in both directions—and a period of consolidation could be in store in the months ahead.

This disease outbreak illustrates the benefits of diversification. While U.S. stocks are down 10 percent over the past week and have erased year-to-date gains, aggregate U.S. bond indexes are up one percent. The classic 60/40 stock/bond portfolio is still flat for the year. Investors didn’t really want to buy bonds with three percent yields, and they really didn’t want to buy them at two percent yields, and they’ll likely wonder why they should even bother at one percent yields, but bonds still provide portfolio ballast in times of turbulence, and low yields can move even lower.