Fixed income market brief: Do central banks have a vaccine?

Fixed income market brief: Do central banks have a vaccine?

When bouts of economic fear take root, markets typically look to central banks for a panacea. But amid the coronavirus uncertainty, do central banks even have the right medicine?

As is usually the case in the face of most periods of economic fear and uncertainty, markets look to central banks to ride to the rescue. However, with the global uncertainty pertaining to the coronavirus outbreak, it seems that markets are instead looking to central banks and asking if there is even anything they can do.

Of course, the biggest risk during these types of events is from a pullback in spending by both consumers and businesses amid heightened uncertainty, but if both sectors are reluctant to spend, travel, and borrow, no amount of cheap money is likely to help. But that hasn’t stopped markets from pricing further easing from many of the world’s largest central banks.

That’s not to say that rate cuts won’t help. Beyond reducing interest rates, changes in monetary policy can also serve to support markets through the sentiment channel, or via the belief that central banks stand ready and willing to act. And we expect that they will.

But the first two weeks of March may prove crucial in terms of assessing both the impact of the coronavirus, and the timing of any central bank response. The middle of the month sees the central banks of the U.S., Europe, and Japan set to meet. Of the three, the Fed is expected by markets to take the lead and to deliver a rate cut. The only question now is whether it’s a standard 0.25 percent move, or if it gets aggressive and delivers 0.50 percent of easing, which would take the fed funds rate to a range of 1.00 percent to 1.25 percent.

Rate cut expectations by the end of 2020 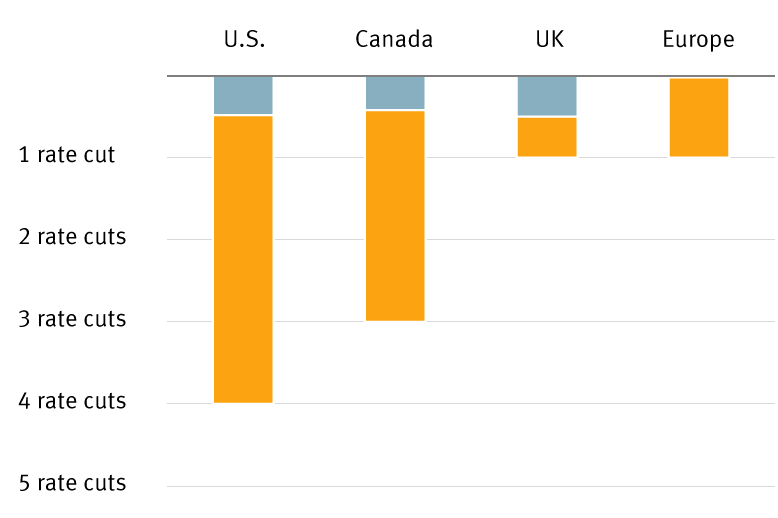 But beyond that, the market is looking for even more easing to follow, with the fed funds rate expected to end the year below one percent, according to market probabilities. However, in our view, we think the Fed is past the point of policy “tweaks.” In a scenario where it is cutting rates below one percent, we believe the Fed would simply take rates back to the zero percent lower bound and hope to fight another day.

In the U.S., global growth concerns and rate cut expectations have driven Treasury yields to fresh all-time lows, with the benchmark 10-year Treasury yield falling to just 1.26 percent on Feb. 27. We now see scope for the U.S. 10-year Treasury yield to fall below one percent in the weeks and months ahead. In Europe, the entire German sovereign Bund curve is back below zero percent, increasing the global stock of negative-yielding debt back to $14 trillion.

The answer then to the coronavirus conundrum is a combination of monetary and fiscal policy, in our view. China has already announced significant plans to support local businesses, and we expect that global governments will step up to offset any economic weakness, which broadly is still expected to be temporary. While uncertainty is unlikely to dissipate in short order, we look for central banks and governments to take decisive action if needed, as it will require a coordinated effort.