While recession risks are rising, financial system stress is nowhere near 2008–2009 levels. We diagnose the current market and economic situation.

The rapid spread of the coronavirus, combined with the reactions by governments, central banks, corporations, and other entities, and last but not least the collapse in crude oil prices, have overwhelmed financial markets recently. There have been more developments for markets and investors to absorb in the past couple weeks than normally occur over many months, and of course these pandemic-related events are anything but normal. 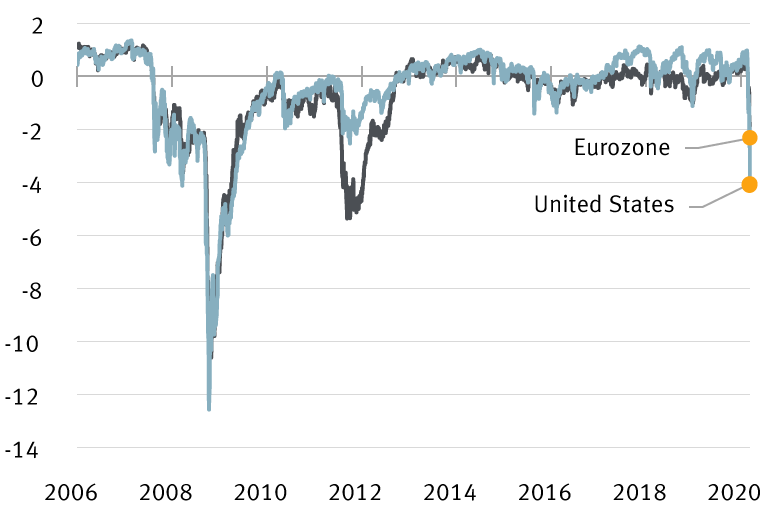 Equities have continued to drop worldwide, with numerous markets now in bear market territory. The S&P 500 has fallen by 27 percent from its peak in mid-February, while developed markets outside of the U.S. have fallen by 28 percent as measured from the recent peak in the MSCI World ex-U.S. Index.

Fixed income markets have struggled with liquidity as yields have drifted lower. As a result, the Fed surprised markets with a liquidity announcement on Mar. 12. Effectively, it is expanding the existing quantitative easing program and boosting liquidity via $1 trillion in weekly repurchase operations. The move is an effort to support Treasury market dislocations due to illiquidity around coronavirus fears and broader fixed income market volatility. The tweak served to briefly boost market sentiment, but our fixed income strategist views it as only a Band-Aid solution until we see what the Fed’s bigger plan of attack is at, or even before, the scheduled Mar. 18 meeting of the policymaking Federal Open Market Committee.

Time for the politicians to step up

In addition to hesitancy about central banks’ actions, financial markets have been dissatisfied by some of the fiscal stimulus announcements thus far, especially those coming out of Washington.

It’s almost always challenging for Republicans and Democrats to compromise, including during times of crisis, so the current disagreements about how to tackle the coronavirus crisis should be no surprise. The partisan and personal acrimony is as bad as we’ve ever seen in the modern era, and the upcoming election complicates matters.

But we think U.S. leaders will ultimately come together with a bold stimulus plan. The equity market is sending a loud signal that it’s needed sooner rather than later—and the timing is important. During the global financial crisis, the federal government (and the Fed) took too long to recognize the need for stimulus and too long to deliver it. The sooner that fiscal and monetary authorities act boldly during this pandemic, the better the buffer for the U.S. and global economies, in our view.

Would fiscal stimulus fix the coronavirus problem? No, this is fundamentally a public health and medical crisis. But we think stimulus can go a long way toward mitigating the damage to the economy, especially if it comes in the near term.

Hits to the bottom line

From an equity market standpoint, earnings estimates are being reassessed as the coronavirus has continued to spread, and as some companies are beginning to alter operations. Because of the mounting risks, Calvasina has lowered her outlook for the U.S. equity market.

For 2020, Calvasina cut her S&P 500 earnings forecast from $174 to $165 per share. This estimate assumes one negative quarter of U.S. GDP growth in Q2, and a recovery beginning in Q3. In this scenario, a recession would be avoided, as those contractions typically feature at least two consecutive quarters of negative growth. As a result of the lower profits outlook, she cut her S&P 500 year-end price target from 3,460 to 3,279. (The S&P 500 closed at 2,480 on Mar. 12.)

If economic activity ends up contracting for longer and an outright recession unfolds, Calvasina estimates there would be an additional, meaningful hit to corporate profits. In this case, S&P 500 earnings could retrench to $149 per share in 2020, much lower than her $165 estimate. This harsher scenario would represent an 8.6 percent year-over-year decline in earnings growth compared to the $163 achieved in 2019. While this scenario is possible, it is not her base-case forecast.

Gauging recession risks is more challenging due to the exogenous and swift nature of the coronavirus shock. Normally, our favorite leading economic indicators can pick up weakness in the U.S. economy and provide a good sense of when a recession could appear, often six to 12 months ahead of time. However, in this case, traditional data is less useful because developments are unfolding so rapidly, and even the best leading indicators signal with a lag.

Therefore, RBC Capital Markets, LLC Chief U.S. Economist Tom Porcelli believes it’s critical to analyze “alternative” data that provide more real-time indications of the potential impact of the coronavirus on the domestic economy. For example, he’s examining vehicle traffic flows and the number of subway rides in major cities in order to estimate the slowdown in consumer spending. From these and other data he can model consumption patterns for the U.S. population. While he anticipates a sizeable near-term hit to consumption, he is still of the belief this will be a short-lived event with one quarter of negative GDP growth.

There is a caveat, however. If the spread of the coronavirus does not let up by the beginning of summer, the risk of a recession would rise meaningfully.

Whether or not a recession unfolds, concerns about the coronavirus outbreak will probably go on suppressing investor attitudes for months to come.

We are still of the mindset that if the U.S. economy avoids a recession in 2020, by year end, stock markets in the U.S., Canada, the UK, Europe, and Asia have the potential to advance meaningfully from correction levels.

But U.S. recession risks are rising as businesses and individuals attempt to cope with the health crisis, and this heightens the prospects of additional volatility and downside for equities worldwide.