The Fed and global central banks are moving fast to keep the financial system running as economic activity risks slowing to a walk.

What a year this week has been. While central banks have taken numerous steps over the past month as the economic threat of the coronavirus outbreak has grown, this week marked a watershed moment as banks around the world pulled out all the stops. And they’re not done.

The Federal Reserve began the week with a surprise announcement on Sunday ahead of the scheduled Mar. 17–18 policy meeting, cutting rates back to the effective lower bound of zero percent to 0.25 percent, while announcing a $700 billion asset purchase program comprised of $500 billion in Treasuries and $200 billion in mortgage-backed securities. The European Central Bank added to the size and scope of its bond purchases, which will now exceed €1 trillion this year alone. The Bank of England cut rates and restarted its own asset purchase program as well.

But while economic stimulus is front of mind for most, the Fed’s focus thus far has simply been to ensure that liquidity is flowing through financial markets. As Federal Reserve Bank of Richmond President Thomas Barkin remarked, “the place we can add the most value is making markets function.”

The plumbing of the financial system largely goes ignored—as it should be—during periods of calm, but it is at least as important as any other form of stimulus—fiscal, monetary, or otherwise—during periods of volatility in terms of promoting economic stability.

To that end, seemingly every day this week has seen the reintroduction of many programs last seen during the depths of the financial crisis. Two major policy tools reintroduced that investors shouldn’t ignore are the Commercial Paper Funding Facility and the Money Market Mutual Fund Liquidity Facility. The two are closely intertwined as money market funds are one of the largest purchasers of commercial paper—or short-term debt issued by corporations to fund payrolls and other near-term expense items.

And with the rush to cash, money market fund assets have swelled to $3.8 trillion, nearing the financial crisis peak of $3.9 trillion in 2009, with market risks bringing back the old fears of “breaking the buck” in money market funds. But in our view, the Fed has once again effectively backstopped short-term funding. As the Fed stated, it “will assist money market funds in meeting demands for redemptions by households and other investors, enhancing overall market functioning and credit provision to the broader economy.” 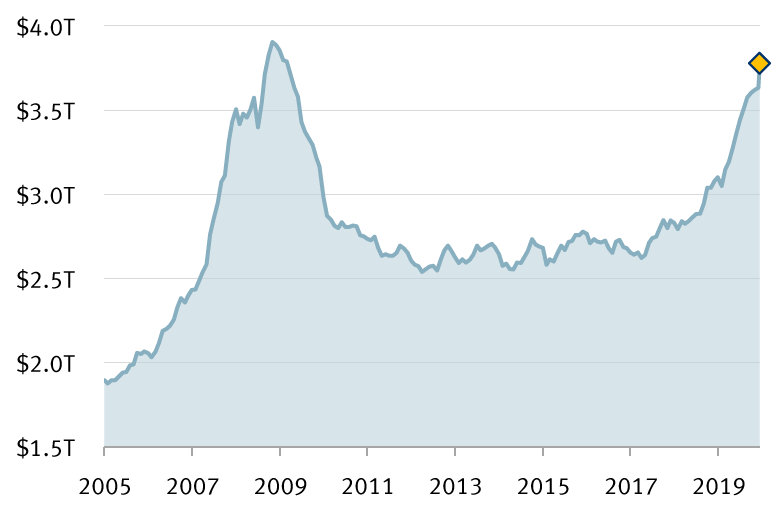 Of course, these are extraordinary times. And while the need to break the glass on tools not used since the global financial crisis may in some way be alarming, investors can take some solace in the fact that the Fed not only has the tools but also the prior experience of using them to facilitate market functioning, and rapidly so.

The Fed still has room to maneuver

To this point, the Fed’s focus has primarily been on market functioning, but as Federal Reserve Bank of Boston President Eric Rosengren said that he expects markets to stabilize in the next week or two, we think that the focus will then shift towards stimulus in the days and weeks ahead.

While a common concern has been that the Fed and central banks globally have less room to act to support economies given historically low, or even negative policy rates, and already large balance sheets, we think that concern is largely unfounded.

In terms of the Fed, the announced asset purchase program as currently structured is essentially aimed at providing liquidity to Treasury markets amid signs of rising transactions costs and forced selling due to fund outflows from many fixed income sector exchange-traded funds and mutual funds—partly fueling the puzzling rise in Treasury yields in recent weeks at the same time that stock markets continue to sell off.

The key difference from past quantitative easing programs is that the Fed is buying across all maturities at the moment, instead of targeting the long end in an effort to drive down yields. Should markets stabilize, we think the buying program could be shifted toward that strategy, and that the Fed could even execute another “operation twist,” as it last did in 2011, of selling short-dated Treasuries and buying further out on the yield curve.

In the years since the Fed stopped expanding its balance sheet, the average Treasury maturity has become quite short, with roughly half of its Treasury holdings now maturing in less than three years. The next step may be to sell some short-duration Treasuries, and redeploy those funds into longer-dated securities—thereby adding stimulus via lower yields and forcing investors into other asset classes.

Expand and extend: Look for the Fed's balance sheet to grow and lengthen 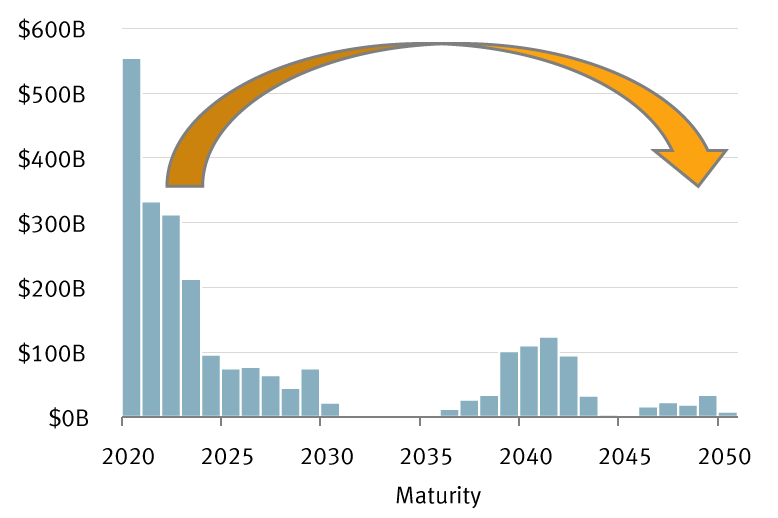 On top of that, there remains the possibility that the Fed could begin buying municipal bonds. The Fed already has the authority to do so, but only with a maximum of a six-month maturity. Given the stress in the U.S. muni market, and the likely increase in funding needs of local governments in the midst of the current crisis, this may be the next phase of Fed stimulus and support.

Central banks may have kicked off the fireworks display this week, but the grand finale is still to come.