Growing uncertainty about the future course of the pandemic and economy has persuaded us to move our recommended equity positioning to Underweight.

Hundreds of thousands of COVID-19 infections, tens of thousands of deaths—and climbing—and the world’s largest economies and stock markets brought to their knees. This is no ordinary bear market.

There is little doubt to us that a global recession is unfolding and that no developed economy, including the U.S., will be spared. “Social distancing” intended to “flatten the curve” makes perfect sense when it comes to public health—the priority right now—but comes at great economic cost.

The economic news in the weeks and months directly ahead will be unsettling, to say the least. But our forecast has the effects of the epidemic waning in the second half of the year, permitting investors to focus their attention on the prospects for a resumption of stronger growth in 2021. The depth and duration of the equity correction will depend on how deep and for how long COVID-19 impacts North America and Europe as well as how effective fiscal and monetary stimulus measures prove to be.

In recognition of how pervasive uncertainty is around the eventual trajectory of both the pandemic and the economy, we have moved our recommended global equity positioning to Underweight from Market Weight. We also set out the factors that we will have to see shift into a more positive reading to allow us to reinstate a fuller commitment to equities commensurate with the more constructive outlook we have for economic and earnings growth in 2021 and beyond.

The massive fiscal aid and stimulus packages of the U.S., Canadian, and UK governments, along with most other developed countries, are designed to put a floor under economies during Q2 by keeping consumers and businesses financially viable through the period of maximum economic constriction. 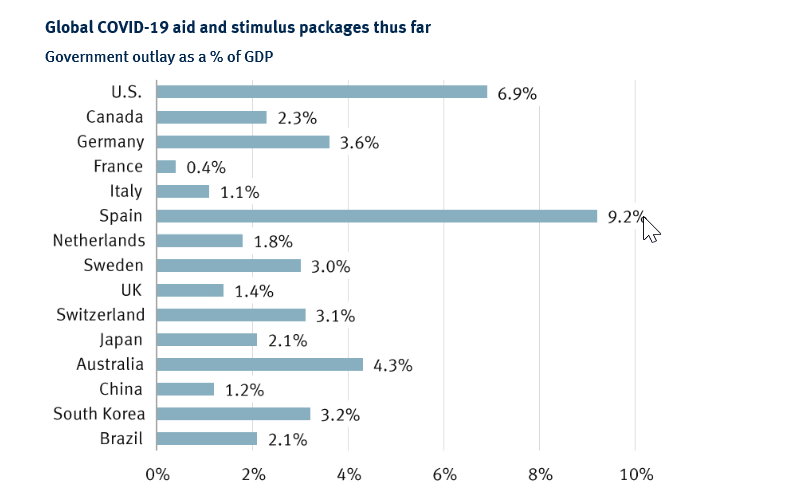 Note: A new relief package that is still in the works is included in estimates for Japan. Fiscal stimulus only includes spending and tax cuts by governments, and does not include relief measures such as tax and fee deferral, loans, and loan guarantees. Governments have pledged significant funds to fight the crisis and combat the economic damage, and we think there is more to come.

We estimate the U.S. has committed aid of almost seven percent of GDP—a heretofore unheard of figure for the world’s largest economy—while Germany and South Korea top three percent of GDP, and many other countries have committed substantial sums as well. Aggressive policies by all of the major central banks are also supportive.

Implicit in the aid and stimulus packages is the idea that infection rates and the number of daily new cases should be in decline in most countries well before Q2 ends, raising a realistic prospect of social and commercial conditions improving in Q3, with a more pronounced rebound evident in Q4. That is our expectation and operating forecast.

China has already demonstrated this is possible. The country was able to restart its economy within a few weeks of its infection rate (i.e., how many people one person with the virus is likely to infect) falling below one. South Korea, surprised by an explosive outbreak in late February, has pulled its daily new cases from close to 1,000 down to less than 100 in just a few weeks.

Italy’s runaway epidemic is showing signs of slowing, and there are some improvements in Spain, which has also been hard hit. Should these nascent positive developments persist and occur alongside indications that social distancing elsewhere in Europe and North America is having a positive effect, the path forward would come into clearer view.

At this stage, we are estimating a disease trajectory for North America and Europe that has the number of COVID-19 cases peaking in April/May, then receding in May/June and throughout the summer.

Consistent with this pattern, RBC Global Asset Management Inc. Chief Economist Eric Lascelles anticipates the global economy will retrench by 2.5 percent in 2020 with much of the drag coming from developed economies, and emerging economies taking less of a hit.

For the U.S., Lascelles forecasts a 3.2 percent decline in GDP in 2020, down from his previous forecast of a 2.8 percent downturn when the spread of the virus was not as wide and its impact not as acute in the country. A 3.2 percent decline would represent a deeper recession than in 2009 during the global financial crisis, and the largest annual U.S. retrenchment since 1946. Incorporated into this annual contraction would be a severe 15 percent nosedive in Q2—the steepest drop of any quarter in U.S. history.

The economies of Europe and Canada are expected to shrink more than the U.S. in 2020—by about four percent—because of the severity of the disease in Europe and the additional blow of low oil prices in Canada. Japan is in the same boat in terms of economic impact. 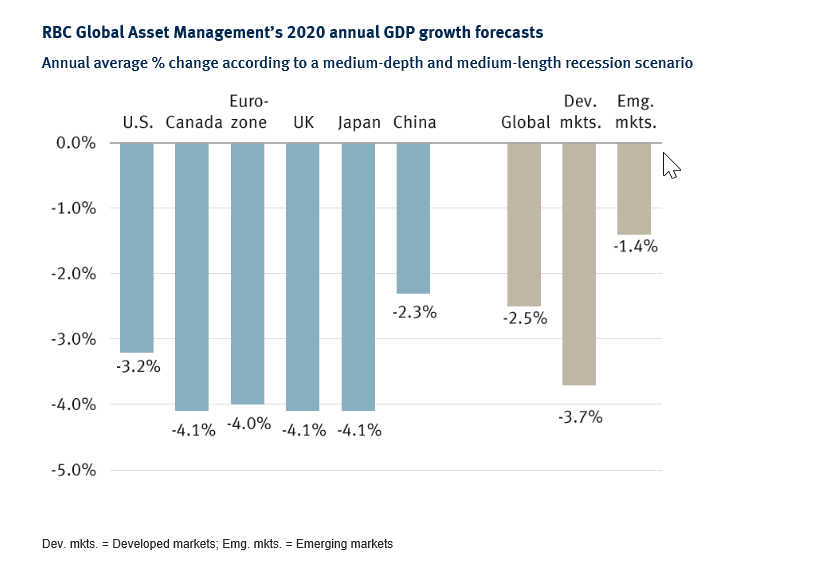 Lascelles notes, however, that economies have the potential to recover quickly in the second half of this year because the hits to labor supply and product demand are largely due to “stay at home” and “work from home” government edicts being implemented for public health purposes, and can be rapidly reversed when the virus wanes.

For 2021, he sees the U.S. economy bouncing back sharply, with GDP rising 5.6 percent—the biggest annual increase since 1984, a recovery that followed a harsh double-dip recession.

Our scenario of an April/May peak in the number of cases and quick economic recovery is only one of many potential outcomes. The “wishing and hoping” scenario—i.e., the pandemic peaks sooner, recedes faster—seems unlikely to materialize. The “slower to peak and to recede” version would deepen the economic impact and likely produce a fresh round of equity market volatility.

Two phases of the pandemic, with the second beginning this fall and carrying into next spring, would not be unusual from a historical perspective (the Spanish Flu had three waves). This raises the possibility that 2021 might experience another period of economic contraction.

None of these scenarios can be said to be the one most likely to occur, leaving the outlooks for the economy and corporate earnings very much in flux in the short term.

All of the economic pressure, of course, spills over into corporate profits. RBC Capital Markets believes it’s reasonable to expect S&P 500 earnings to decline by at least 15 percent this year from the 2019 level, with the biggest hits in Q1 and Q2. That would put 2020 earnings per share at $139, although we think there is downside risk to this forecast if the COVID-19 shutdowns linger for longer than just the next couple of months. (At the moment consensus forecasts remain unrealistically high at $164 from which they are likely to fall in coming weeks.)

It is worth remembering the “value” of an individual business and of the equity market as a whole is the present value of all future earnings—i.e., investors are buying into a multiyear stream of earnings. Looked at that way, even big, unexpected changes in the near-term earnings outlook shouldn’t have a large impact on the market value of corporations. But they usually do because, for a while, investors come to believe that the performance of the economy and market today are pointing to an altered trajectory for economic and earnings growth in the future.

Looking back at a century of pandemics, wars, nuclear disasters, and more, that sort of conclusion has not been useful. Within a year or two, the forces of global population growth and rising prosperity tend to reassert themselves and, before that has happened, stock markets have gone back to capitalizing future earnings appropriately.

We do not believe COVID-19 will cause a permanent hit to the profits of most companies. Not even the Spanish Flu of 1918—a much more deadly pandemic that killed more than 40 million mostly young adults worldwide with three rounds of mass infection—resulted in enduring damage to economic growth.

But right now, deep uncertainty is present on several fronts. Earnings estimates and GDP forecasts everywhere are being revised lower in response to the near standstill in some parts of the economy. Price-to-earnings (P/E) multiples have been pressured lower as: (1) investors have become more pessimistic about future economic prospects and (2) ultralow corporate bond yields, which were supportive of above-average P/E multiples, have been swiftly replaced by much higher yields—Moody’s Baa yields rose from 3.20 percent on Mar. 9 to about 4.60 percent—offering a more attractive return alternative to stocks than just a few weeks ago.

While it’s true the swift 35 percent peak-to-recent-trough decline in most stock markets priced in much of this uncertainty, it’s also the case, in our view, that the tide of bad news has not yet turned, leaving open the possibility of further market weakness to come.

Here are some of the developments we are watching for that could potentially put us back in an environment where future rewards considerably outweigh near-term risks:

In recognition of how pervasive uncertainty is around the eventual trajectory of both the pandemic and the economy, we have moved our recommended global equity positioning to Underweight from Market Weight. However, we expect some combination of an easing in the progress of the pandemic and signs the policy responses are having the desired effect will eventually allow the market to regain its composure by permitting investors to focus on improving prospects for 2021.