We zero in on the action in emerging markets, size up the challenges facing this asset class, and suggest how to position portfolios.

Chinese equities are a case in point. Their recent outperformance has been more abrupt than most think. As put by RBC Global Asset Management Inc. Chief Economist Eric Lascelles, early in 2020 “recriminations were flying against China given its status as the point of origin for the disease” and its heavy-handed approach to confinement measures. The renminbi floundered in response to the weaker growth outlook and as the epidemic was at that time considered purely a Chinese event.

Fast forward a few months, and we’re seeing a reversal of China’s misfortunes, and prior criticism of a draconian lockdown has flipped to praise. It helps that COVID-19 is no longer seen as a Chinese-centric issue. Moreover, as Lascelles notes, the original epicenter in China “remains nicely under control” and the country’s “economic rebound appears to be vigorous” as China slowly reactivates its economy.

This sea change is best illustrated by the outperformance of Chinese equities relative to other emerging markets, the most dramatic in more than 15 years. In fact, whereas the MSCI Emerging Markets ex China Index has retraced all its gains since 2009, the MSCI China Index has only retraced its advance since 2019. 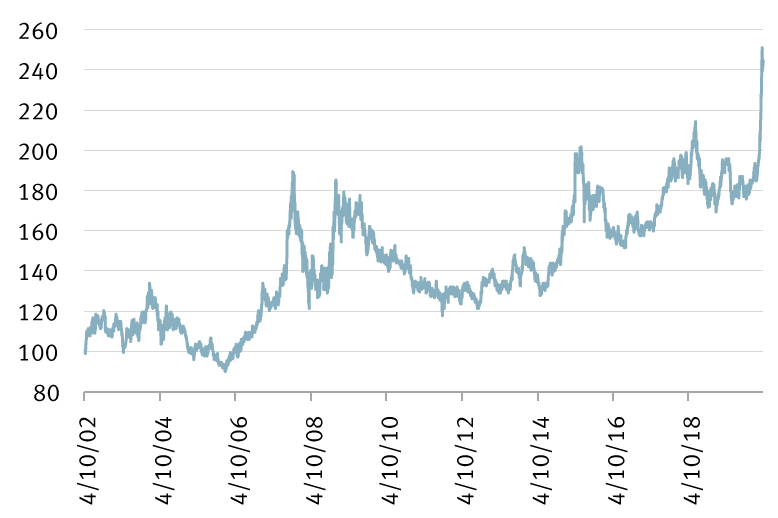 China’s outperformance may also reflect investors’ concerns regarding other emerging economies. The MSCI India Index suffered its worst single-day drop ever in March despite India being a beneficiary of lower oil prices. Apprehension about several generations living in the same house making for fertile ground for the virus to spread combined with containment measures that crimp economic growth spooked investors.

But it is the MSCI Emerging Markets Latin America Index that has suffered the most as all the gains made relative to the MSCI World Index since 2003 have been wiped out. Most Latin American countries heavily rely on commodities, and the collapse in their prices has robbed governments of an important source of revenue.

Outperformance since 2003 now fully wiped out 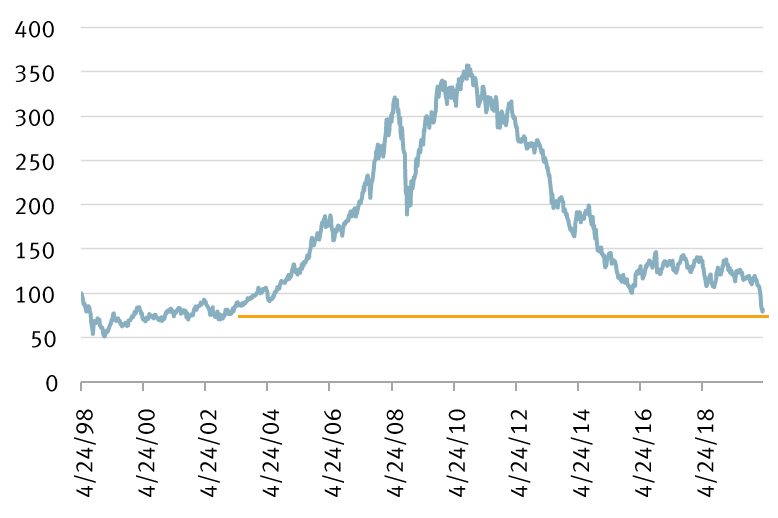 Other than a few Asian nations such as South Korea and Taiwan, most emerging countries lack adequate resources to deal with the health care crisis spawned by the COVID-19 epidemic.

Health care systems in emerging nations are more precarious than in developed countries, with the number of hospital beds per 1,000 inhabitants much lower than in Europe or the U.S. According to the World Bank, India, for instance, has 0.7 beds per 1,000 people, Mexico 1.5, and Brazil 2.2, compared to 2.9 in the U.S. and 8.2 in Germany, a country with an admittedly well-endowed health care system.

There are usually many fewer social safety nets in emerging countries than found in Europe or Canada. Also, authorities in emerging countries do not have the same latitude to inject large amounts of money into their economies as their U.S. counterparts do. Such action would cause emerging currencies to depreciate, an undesirable outcome for emerging market nations as a large proportion of their corporate debt is denominated in foreign currency, usually U.S. dollars.

If these structural challenges weren’t enough, cyclical difficulties are also mounting. Global demand for manufactured goods and commodities, on which most of these countries heavily depend, have come to a stand-still. According to International Monetary Fund (IMF) chief Kristalina Georgieva, nearly $90 billion have left emerging markets and developing economies in a widespread flight to safety.

It is therefore not surprising that the IMF has received requests for help from more than 90 countries over the past few weeks. As Georgieva put it, “The same way the virus hits vulnerable people with medical preconditions hardest, the economic crisis hits vulnerable economies the hardest.”

But it is not all bleak. The IMF has a war chest that exceeds $1 trillion, representing a high 25 percent of the total stock of emerging market debt, according to Polina Kurdyavko, head of emerging market debt at BlueBay (an RBC Group company). This is more than the IMF had at its disposal during the Asian financial crisis of 1998 and the global financial crisis in 2008.

How hard the hit?

But it is undeniable that economies everywhere will be severely hit this year. To wit, Lascelles has lowered his 2020 forecast for U.S. GDP growth to -7.7 percent from -3.2 percent as COVID-19’s impact on the depth and duration of the downturn are becoming clearer.

Economic contraction overall in emerging markets will likely be less severe thanks to the underlying structural “catch-up” potential they enjoy. Moreover, China, the largest component of the asset class, is reactivating its economy and pressing on with its strategy of redirecting its efforts from servicing global markets to focusing on domestic consumption and servicing its own market of 1.4 billion people.

Still, given the uncertainties, we believe investors would do well to focus on those countries best equipped to deal with the current challenges. We have a long-held Overweight position on Asia ex-Japan equities. The region, which includes China, is a key beneficiary of lower oil prices. Moreover, many countries in the region have been praised for their focused and disciplined handling of the COVID-19 outbreak and have actively supported their domestic economies during this ordeal.