The rally’s narrowness doesn’t negate the move, and if the bottoming process is for real we should see more inclusive participation in months ahead.

The five largest stocks in the S&P 500 by market value—known as FAAMG—have done the heavy lifting and are the top contributors to the gains: Facebook, Apple, Amazon, Microsoft, and Alphabet (Google). Another 18 stocks have provided outsized returns as well. 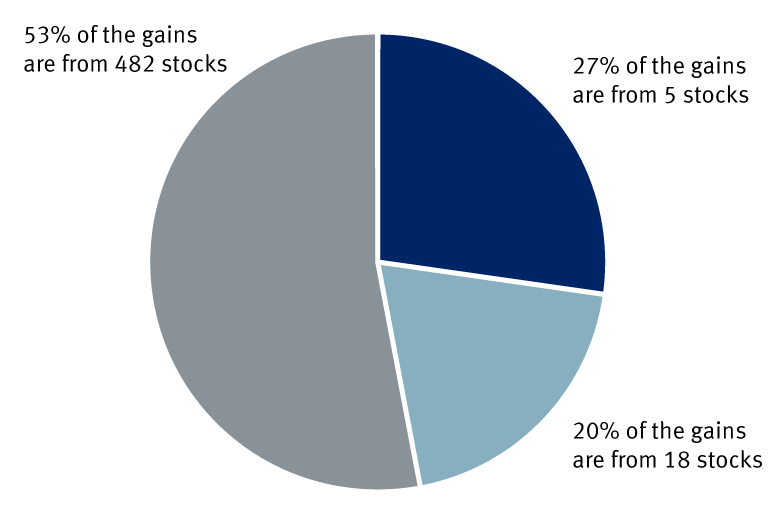 We think the mismatch in performance between many diversified equity portfolios and these stocks that have contributed the most to the S&P 500’s gains will sort itself out over time, as the market works through its bottoming and recovery processes, to the benefit of diversified portfolios.

As the S&P 500 has advanced 27.5 percent since the Mar. 23 low, a sizeable 27 percent of that gain comes from just the five FAAMG stocks, all of which play major roles in driving the technology ecosystem. (FAAMG acronym aside, the order of their contribution to S&P 500 gains is Google first, Apple second, and then Microsoft, Amazon, and Facebook, respectively.)

These five stocks represent almost 21 percent of the S&P 500’s market capitalization, so in delivering 27 percent of the index’s price return, they are punching above their weight.

Another 18 stocks represent another big chunk of the S&P 500’s gains. This list includes a more diverse group. Five of the 11 sectors are represented: Health Care, Technology, Consumer Discretionary, Energy, and Consumer Staples.

These 18 stocks are punching even more above their weight as they collectively represent about 15 percent of the S&P 500’s market capitalization and have delivered 20 percent of the gains since Mar. 23.

The other 482 stocks that have been included in the S&P 500 in the past couple months represent the other 53 percent of the gains that have occurred since the low.

The narrowness of the rally doesn’t negate the move. Following a bear market low, it is not unusual for a relatively small group of stocks to lead the S&P 500 out of the fire, although it can be unnerving when comparing the returns of a diversified equity portfolio.

Typically, broader participation from a wide range of stocks and sectors doesn’t materialize until the rally becomes more accepted, entrenched, and seasoned. And that process usually transpires as the economy gains strength and stability.

But certain aspects of this initial rally off the bear market low are unusual. Not only have the five biggest stocks helped power the market higher, they represent a greater share of S&P 500 market capitalization (dollar market value) than usual, and have become more correlated with one another.

For example, with the FAAMG stocks representing almost 21 percent of the S&P 500’s market capitalization, they are a larger part of the index than the top five largest stocks during the tech bubble in March 2000, another period of market concentration. Back then Microsoft, Cisco Systems, General Electric, Intel, and Exxon Mobil made up 18.2 percent of the S&P 500, according to Bloomberg Intelligence.

While a nearly three percentage point difference in market capitalization between then and now may not seem like a lot at first blush, we think it’s meaningful considering these are only five stocks in an index of roughly 500 stocks.

Furthermore, and perhaps even more troubling, the correlation between the FAAMG stocks has spiked recently.

When the market peaked in mid-February, the FAAMG correlation was 0.52. But since then, during the correction and the rally that followed, the correlation has jumped to 0.78. This means these stocks have been often trading in tandem, moving higher and lower together, providing little diversification. 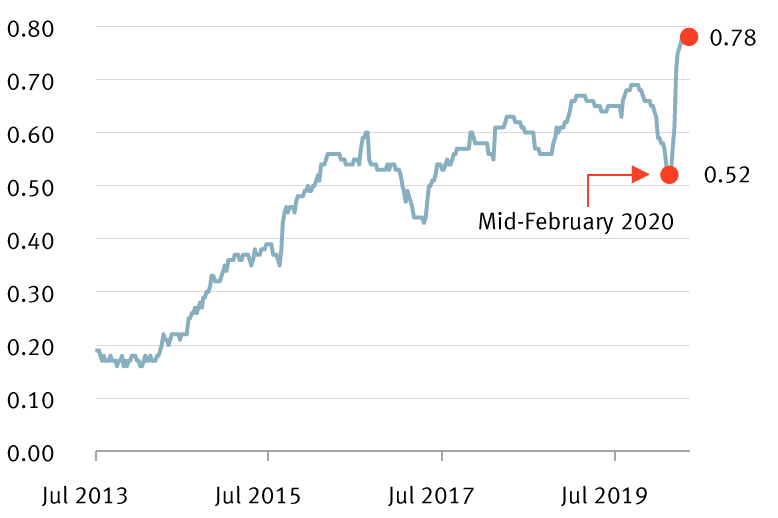 We think that mismatches in performance between diversified portfolios and the largest contributors in the S&P 500—FAAMG and the other 18 stocks—will largely sort themselves out over the medium and long term.

Diversified equity portfolios aren’t lopsided in their allocations, as they include a number of individual equity positions and/or funds across a wide range of sectors, capitalizations, and markets with different risk parameters and correlations. We continue to believe this is the most prudent way to manage equity portfolio risk over the long term, as it tends to lower volatility and reduces the likelihood that any one stock or a small group of stocks (or any one subsector) can severely damage overall equity portfolio returns.

As the market continues to work through its COVID-19 bottoming process—which could include more downside volatility like we’ve seen in recent sessions—and then eventually turns higher on a sustainable basis, we think the rally will broaden out beyond FAAMG and the other 18 stocks that have been driving the move recently. This should ultimately benefit diversified equity portfolios.