With the Fed’s punch bowl here to stay, and another multiyear period of low rates ahead, we look at how to position fixed income portfolios.

Perhaps it was nothing more than a formality at this point, but this week the Fed made clear that interest rates will remain at zero percent through at least 2022—the Fed’s current forecast horizon—even as tentative signs mount that the economic reopening is progressing, which has given way to some notion that the Fed may consider pulling back on the reins.

However, there was considerably less consensus about the economic outlook—which should be expected given what will remain heightened uncertainty—while this week’s stock market selloff serves as a reminder that the road back will be rocky. But even with all of the monetary and fiscal stimulus delivered thus far, the Fed expects GDP to drop by 6.5 percent this year, followed by a five percent rebound next year. One half of the Fed’s dual mandate—price stability—isn’t expected to be achieved over the Fed’s entire forecast horizon as inflation is seen falling short of the two percent target. The other half of the mandate—maximum employment—and the key focus for the Fed, risks falling well short for years as well.

Unemployment is only seen falling to 5.5 percent by the end of 2022, which would still be a full two percent above the 2019 low of 3.5 percent. However, there is considerable variability around the Fed’s forecasts. While unemployment is expected to end this year around 9.3 percent, the individual forecasts from Fed officials span from seven percent all the way to 14 percent. The same holds true in the years ahead, but even the most optimistic forecast has the unemployment rate at four percent by the end of 2022; the Fed continues to estimate “full employment” for the economy as being approximately 4.1 percent. Our view remains that the bar for raising rates is a return to four percent unemployment. 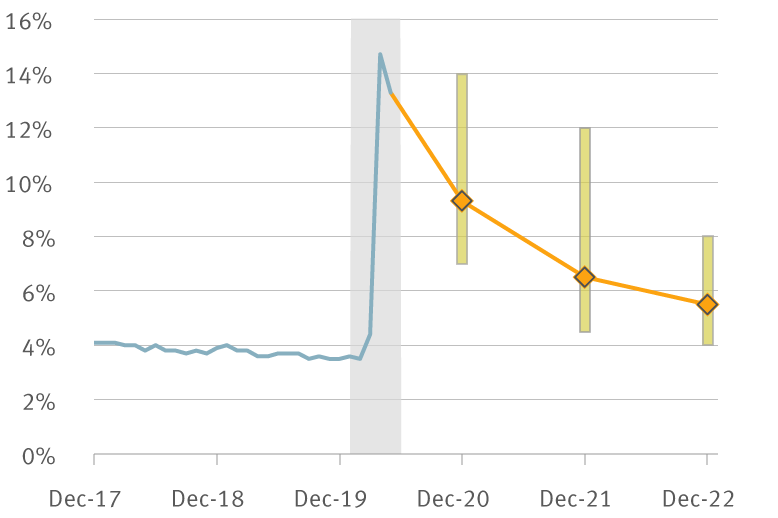 The U.S. has officially entered a recession as of February—as determined this week by the Business Cycle Dating Committee of the National Bureau of Economic Research. RBC Economics continues to expect a 35 percent decline in GDP this quarter, followed by a 20 percent rebound in Q3. Should that hold, this recessionary period should last roughly six months—shorter than average, but far deeper.

With unemployment expected to remain elevated, combined with low inflation and growth uncertainty, we believe the Fed is only focused on adding further stimulus rather than pulling back in any way. We look for policy changes at the September policy meeting when officials will have more data, and hopefully a more reopened domestic and global economy to support.

While zero percent interest rates are necessary to support the economic recovery, this environment likely ushers in another multiyear period of low interest rates for investors—and we believe this one may be even more challenging than the last in some ways.

With respect to yield curve positioning, we shifted to a Neutral stance this week following an extended period of favoring long-duration exposure as yields have declined over the past 18 months. At this point, the outlook for Treasury yields is now roughly balanced, in our view, with the prospect of further quantitative easing, along with the chance that the Fed launches a yield curve control program, likely to anchor rates at or below current levels—while the prospect of improving growth and higher inflation on the back of massive stimulus could offset that and fuel modestly higher yields. At this stage, we are comfortable remaining near benchmark duration targets, or focusing on the intermediate portion of yield curves—approximately between 7–20 years.

Notably, we would highly recommend avoiding short-duration maturities and rolling over bonds as reinvestment risk will likely remain high. Another way to approach portfolios, and to think about interest rate risk in a low-yield world, is to take advantage of relatively steep yield curves. Using Treasuries as an example, instead of buying a 5-year Treasury that currently yields 0.30 percent, investors can buy a 10-year Treasury that yields near 0.70 percent, and in five years’ time rolls down to become a 5-year security priced to a yield closer to zero percent, particularly if the Fed remains on hold. Investors benefit from both the higher income and the price appreciation of the bond over that horizon—which could then be sold and reinvested. The benefit is more pronounced for higher-yielding credit products.

With the Fed likely stuck at 0%, investors can extend and lock in coupons 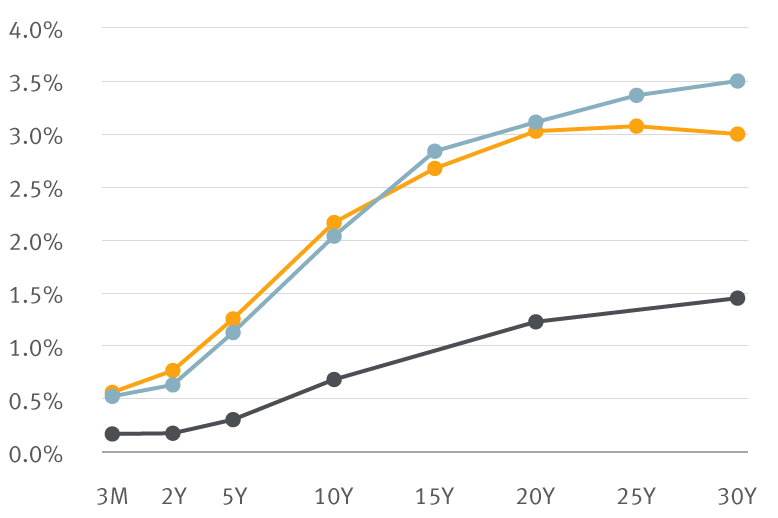 In a low-yield world, fixed income portfolios will require a more active approach to generate income and total return. But ultimately, bonds will still provide ballast for portfolios, and act as a source of capital preservation in times of volatility.