Increasingly, investors are asking about a range of atypical U.S. presidential election scenarios and, specifically, how these could potentially impact the stock market.

The most common questions asked are: What if the election is contested and/or what if there isn’t a clear winner on Election Day?

The expected surge in mail-in ballots due to COVID-19 restrictions and related health concerns has increased the possibility that election results could be delayed. Some states and courts have established new vote-counting rules that would push back official certification of results.

For example, in Wisconsin and North Carolina, both considered swing states by political analysts, mail-in ballots will be accepted up to six and nine days, respectively, after the November 3 Election Day as long as they are postmarked by that date.

If the overall race is tight, and if the vote count is close in such states on the night of the election, the delays could generate some uncertainty for the market. But we think the market is largely prepared for this as it is being well telegraphed.

What if the election is contested? This is a separate issue entirely. This could involve a close race in one or more states—close enough to trigger an automatic recount. (Each state has its own rules and procedures for recounts.) Or, a contested election could occur if other types of issues trigger litigation, such as evidence of election irregularities that could impact Electoral College votes.

There is only one example of a contested presidential election in the modern era, back in 2000 when the vote count between George W. Bush and Al Gore was tight in Florida, a swing state rich in electoral votes.

The close Florida results triggered an automatic statewide machine recount. At one point, Bush’s lead had shrunk to only 327 votes. As events unfolded, the Bush and Gore teams fought in state and federal court, with multiple lawsuits and appeals, about whether manual vote recounts should be conducted (remember the “hanging chads”?).

S&P 500 performance surrounding the Bush vs. Gore Florida recount in 2000* 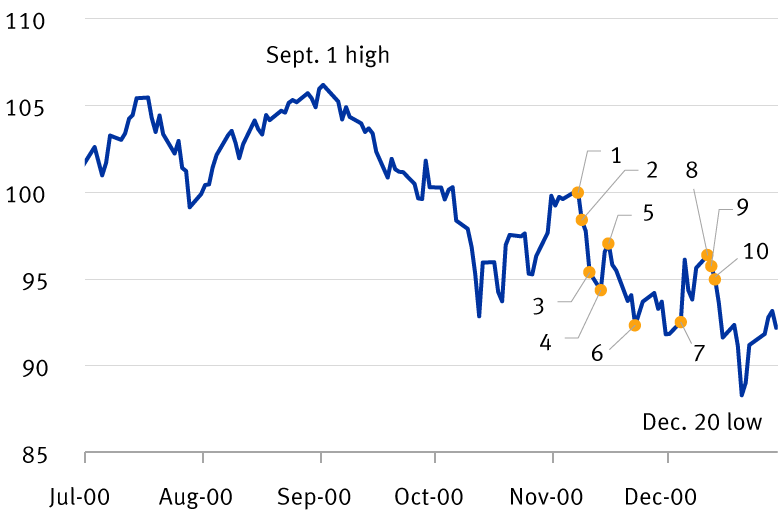 Two cases ultimately made their way to the U.S. Supreme Court, and its rulings favored the Bush team. The decisive case was a 5-4 ruling that halted the manual recounts altogether. This effectively awarded the state’s 25 electoral votes to Bush, making him the 43rd president.

The S&P 500 fell 12 percent from Election Day on November 7 to the market bottom on December 20, which occurred one week after Gore conceded.

Consider that the market was not at all prepared for this election drama, including the multiple court battles or the Supreme Court’s intervention. The events came like bolts of lightning out of the blue. There was no precedent. It was a complete surprise, so the major stock indexes had difficulty absorbing it all.

This election cycle, various atypical scenarios are being discussed openly, including by those in power in both parties—by the president, the speaker of the House of Representatives, other elected officials, and many political strategists and pundits. For voters, such scenarios can be disconcerting— at best. But from an investing perspective, the scenarios are not a secret. The market is well aware this may not be a seamless or normal election outcome. We think this knowledge and the events of 2000 make the market better prepared this go-around.

We also think it’s important to remember the Bush vs. Gore dispute is just one instance. One historical event does not make a trend for the market.

Furthermore, today’s equity fundamentals, economy, and monetary and fiscal policies differ from that period. For example, as the Bush-Gore recount drama was unfolding, the wildly overvalued tech bubble was beginning to burst—in hindsight, a major historical event for the market. As we have written previously, we do not believe Tech stocks are in a bubble phase today like they were back then.

Stick with your plan

Investors should be aware that a market selloff materialized during the 2000 contested election, and that there are short-term volatility and downside risks associated with the current election. But we would not adjust long-term equity allocations based on atypical election risks, especially since such an event would likely be transitory in nature.

If unusual post-Election Day events occur and even if there are multiple lawsuits, the caravan will keep moving on. The major companies listed on U.S. stock exchanges will be there once everything gets sorted out. And the situation will get sorted out. There is just too much at stake for big business, and more importantly for the country, for us to argue otherwise.

Regardless of who is elected president, and which party controls the House and the Senate—and importantly, regardless of whether there is post-Election Day drama—we see scope for at least moderate U.S. economic and earnings growth, and therefore higher stock prices, in the next 12 months.