We examine recent volatility impacting equity markets, and look to manage investment risk against this backdrop.

Over the past three months, markets have struggled to reconcile the sharpest-ever quarter-over-quarter decline in economic activity with the announcement of the largest economic stimulus packages in history, as well as interpreting short-term data and projecting them into long-term trends. The result has been high volatility, and we believe this will likely continue.

The S&P 500 fell more than six percent in the second week of June and recorded its worst week since March. Many observers blamed Federal Reserve Chair Jerome Powell, for suggesting the economic recovery would be a slow one and pouring cold water on the enthusiasm for a “V-shaped” recovery. They also pointed out that the weekly number of initial jobless claims was discouragingly elevated at 1.5 million, given the U.S. economy had started to reopen a full month earlier. The resurgence of COVID-19 in a few key U.S. states further frayed nerves. 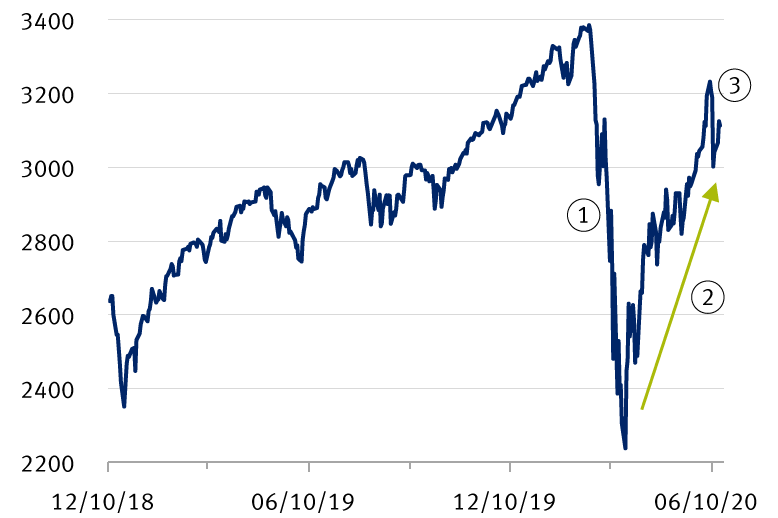 Given these ongoing factors, one would be forgiven for being surprised at the strength of the rally just a few days later. Four explanations were put forward by market watchers. First, markets were invigorated by central banks reiterating they were there to help. The U.S. Federal Reserve announced the launch of its corporate bond buying plan, shifting from acquiring exchange-traded funds of investment-grade bonds to setting out to build a portfolio of individual bonds. The Fed’s statement came only hours after the Bank of Japan (BoJ) signaled it would top up monetary support for its country’s economy.

Third, U.S. retail sales jumped by nearly 18 percent month-over-month in May as the economy reopened and the federal government’s direct payments to individuals helped steady household incomes. This is the largest increase on record and more than double consensus expectations, suggesting a fast recovery may be in the offing. Many saw it as an indication that the fiscal medicine is working.

But it was UK scientists hailing a breakthrough in the search for COVID-19 treatments that may have contributed most to the positive sentiment. A trial led by Oxford University researchers found that the drug dexamethasone, an inexpensive and widely available generic steroid, helped save the lives of patients suffering from serious coronavirus infection. Scientists found that dexamethasone prevented one in eight deaths of patients on ventilators, and one in 25 deaths of patients receiving oxygen support. Patients not requiring ventilation or oxygen support were not helped by the drug.

All these are valid reasons for optimism, but on closer inspection, we believe a more muted reaction may have been warranted. An ambitious infrastructure program in the U.S. would be a welcome move to modernize the country’ s ageing infrastructure, but we see a low probability of passing such a bill through Congress before the elections. The retail bounce is remarkable, but retail sales are still down six percent from a year ago. And the discovery that a widely available and inexpensive steroid can help acute cases of COVID-19 is no panacea for those fearing the debilitating symptoms the disease can bring. Many may believe only a widely available vaccine would remove the need for social distancing, ensure a quick return to normality and offer the best hope for the economy to return to full capacity.

Even the reactions to the announcements from the Fed and BoJ were somewhat surprising, as both central banks had telegraphed their strategies in advance. What investors have reason to cheer, in our view, is the sheer volume of liquidity being pumped into the system.

According to Bloomberg, the balance sheets of the G4 central banks—the Fed, the BoJ, the European Central Bank, and the Bank of England—together have grown from some $14.8 trillion at the end March to $20 trillion at the end of May. More is coming. This powerful injection of liquidity has pushed yields down and lifted risk assets such as equities.

But the fact that central banks are stepping in so forcefully suggests they are worried about the future. Why intervene unless they are concerned about indebted companies and the prospect of a slow grind to recovery, during which many small businesses would be likely to fail and unemployment to stagnate?

Eric Lascelles, chief economist at RBC Global Asset Management Inc., expects the economy to climb back to its prior peak at the very end of 2021 and to reach its full potential by the second half of 2022. But Lascelles notes that, “as per the updated Fed forecast, this could just as easily happen at a later date, potentially even several years later.”

Central banks’ liquidity infusions are driving risk assets, but unless the economy catches up with markets and economic progress continues at a brisk pace, the risk of subdued returns or a pullback from here remains, in our view. Many economic indicators suggest caution for now. Volatility is likely to remain at a high level, as investors weigh short term data and try and extrapolate them into long term prospects.

This leaves us invested in equities but maintaining a prudent stance via a modest Underweight relative to the benchmark. We prefer to allocate risk in areas benefitting directly from central banks’ largesse, such as corporate credit, and high-yield corporate bonds in particular.