Accepting there's no such thing as normal may help to drive better investment decisions.

The idea of “normalization” has been a constant theme for investors since the financial crisis of 2008. The market impact and the steps taken in response—particularly by global central banks—were so extreme that there now seems to exist in the psyche of investors some form of pre-crisis normalcy that we’re all trying to get back to.

But what even is normal? The Federal Reserve has been leading the charge in this respect, and has regularly used that verbiage. It is currently “normalizing” the balance sheet and has been raising short-term rates since 2015 to get to “more normal” levels.

Perhaps it’s just human nature to view the past as the correct representation of what’s normal. For example, another oft-cited case, and complaint, is that economic growth in the U.S. this cycle has been slower than it was during most past economic expansions. While true, few think of it in terms of it being the case that it was historical growth that was abnormal, and this type of growth normal.

What even is normal? 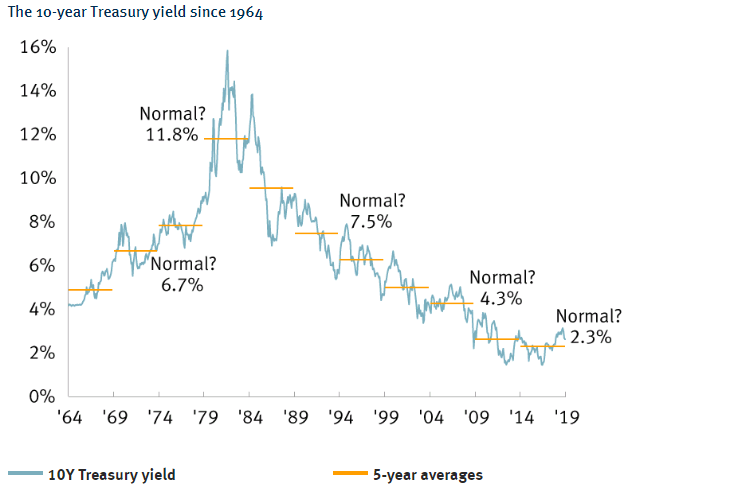 For equity investors, this framework of thinking has regularly featured in headlines as justification to take comfort. As the thinking went, interest rates were well below historical norms, so there was no reason yet to fear the Fed. But in December that all changed as U.S. equity markets neared bear market territory following the Fed’s decision to raise short-term rates to just 2.50 percent, with fears only heightened that the Fed might even push rates beyond that.

For fixed income investors, this idea of normal has likely had even more of a direct impact on investment decisions, and, in our view, suboptimal ones. There has been no shortage of ink spilled about investing in a “rising rate environment,” but we think it’s now clear that the best way to navigate fixed income markets is to accept that there is no such thing as normal. And those waiting for things to return to some state of normal may risk missing out on investment opportunities.

The long and the short of it

Investing in fixed income in a rising interest rate environment is always tricky, perhaps even more so when starting from zero percent interest rates. The natural inclination is to find safety in the front end of the curve where there’s little interest rate risk.

But as the chart above shows, this has been a losing strategy since the Fed started raising rates in December of 2015. The Bloomberg Barclays US Aggregate Bond Index comprises most major fixed income sub-asset classes. Had you only invested in 1–3 year maturities from the day the Fed first raised rates on December 16, 2015, your total return would have been just 4.2 percent. The long end of the curve, beyond 10 years and supposedly posing greater risk in a rising rate environment, on the other hand has posted a total return of 15 percent.

As the chart shows there’s more volatility in long-dated securities, but for buy-and-hold fixed income investors, that should be of little concern. Barring defaults, you know where your bond is going to end up.

Get out of your comfort zone

We have long advocated the “lower for longer” mantra with respect to rates this cycle, and to not be afraid of extending on the yield curve. That story was relatively easy to sell five years ago when short-term securities paid almost nothing, and yield curves were steep everywhere. But now that short-term instruments have yields nearing three percent, as in the case of certificates of deposit, and with the flattening of the Treasury yield curve dominating headlines, investors are asking why they should, or even need to, buy longer-dated securities when similar levels of yield can be found in short-dated ones.

Not all curves are flat, lock in yields while you can 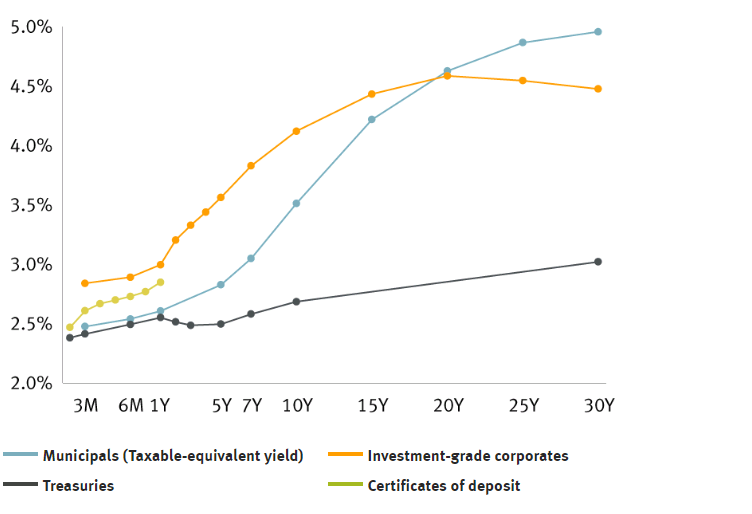 The reason is that it’s called “reinvestment risk” for a reason. It’s not called reinvestment opportunity, though many investors hope to reinvest at higher rates and steeper yield curves. But the point remains that there is risk in focusing only on short-term maturities, particularly as the market is still pricing a greater chance of a rate cut in one year, than it is for a rate hike.

While there may not be much incremental yield found in moving out on the curve, investors are locking in that yield for longer. And as we maintain our view that the Fed is likely already at the end of this rate hiking cycle, we think that’s reason enough to not ignore the long end of yield curves. Like nearly all cycles that have come before, the next phase of yield curve steepening will likely be driven by falling yields at the front end, not rising yields at the long end.

Though yields remain historically low, that doesn’t mean they are abnormal—there is no such thing as normal, in our view. Thinking there is may cause investors to leave money on the table.