While the U.S. stock market remains in the vicinity of its all-time high, several lurking uncertainties beg the question: Is the rally for real?

The U.S. equity market is lingering near its recent all-time high following signals from the Federal Reserve that it could soon cut interest rates and after the U.S. and China stepped back from some of their adversarial trade rhetoric.

The market has not yet reached what we would classify as a strong, clear breakout. Bellwether transportation and small-cap stocks lag the S&P 500 and other broad indexes by substantial magnitudes. This means it could take more time to bust through the 18-month trading range.

A new U.S. high but range-bound trading could persist 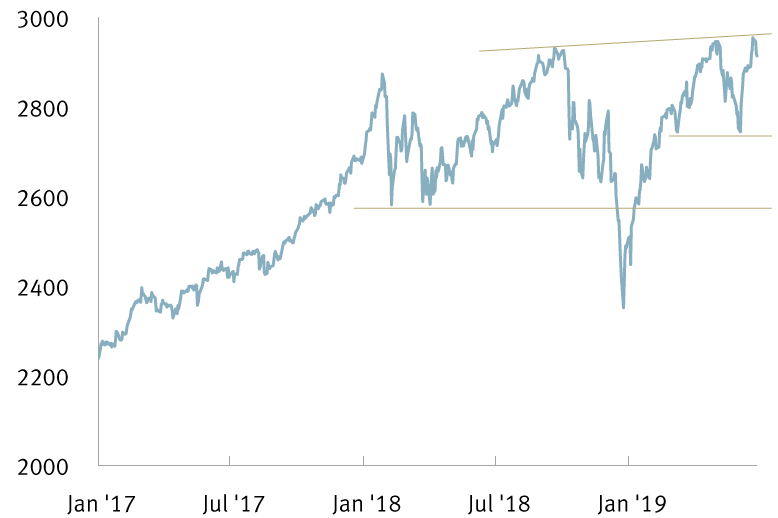 As long as the domestic economy avoids slipping into recession, we think the bull market can persist. The health of the economy is a key uncertainty facing the market, and we provide some clarity on this and other questions that investors should consider.

Is the economy skating on thin ice?

There’s little doubt momentum in key trade-oriented sectors, such as manufacturing, has weakened. Business confidence has pulled back for the same reason. And recently consumer confidence began to retreat. There is a wide gap between how consumers feel about their “current” situation compared to what they “expect” in the future, with the latter measure much lower—not a good sign.

However, due to other data the Atlanta Fed’s Q2 GDP forecast has risen since May and now stands at 1.9%. We think the economy is vulnerable to further slowing in the months ahead, but only one of our six key recession indicators is signaling caution at this stage.

Stocks tend to respond positively to Fed rate cuts when they are used as “insurance” to keep the expansion going rather than as an attempt to put out a fire from a looming recession. For example, in the mid-to-late 1990s when growth was at risk, the Fed’s “insurance” rate cuts helped prolong the recovery and the market rallied.

However, when the Fed overstepped by raising rates too much during two periods from 1999 to 2006, and then subsequently shifted into rate cutting cycles in an attempt to undo the damage, it was too late. The economy contracted and bear markets materialized on both occasions.

Currently our economic indicators are pointing toward the former “insurance” scenario rather than the latter. Therefore, we think the old “don’t fight the Fed” mantra still applies. 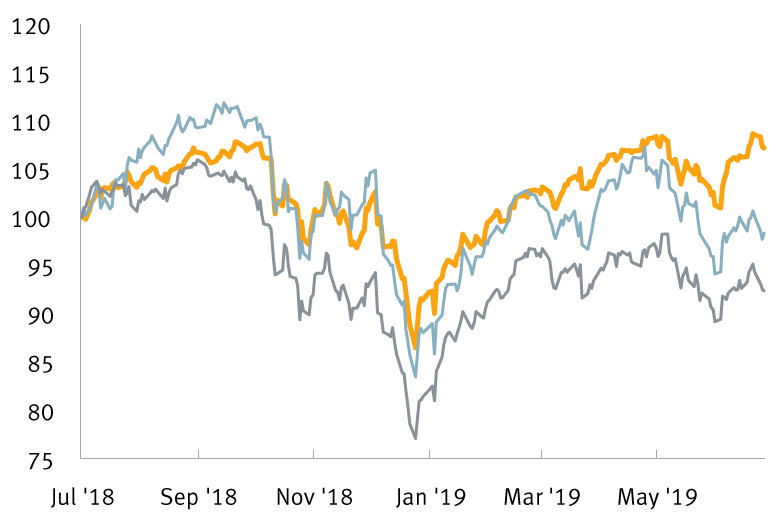 Trade disputes and sanctions are about more than the U.S. trade deficit and manufacturing jobs. The Trump administration is also attempting to hold back geopolitical rivals, address domestic challenges, and contain or suppress foreign corporate competition, in our view.

In addition to the high-profile dispute with China, U.S. tariff and sanctions threats are hanging over the European and Japanese auto industries (which would have knock-on effects for North American producers), a consortium of leading European natural gas infrastructure companies (Nord Stream 2), and allies Turkey and India for purchasing missile defense technology from a U.S. rival. The U.S. also initiated a separate tit-for-tat tariff spat with India, and recently threatened Vietnam as companies have shifted production there from China.

To us, this means once a trade or sanctions dispute is “resolved” another one may pop up somewhere else. And even when a trade deal is supposedly sewn up, tariff threats can come right back to bite countries that seem to be in the clear. Mexico knows this all too well.

While we think some of this has been factored into the U.S. market already, persistent tariff and sanctions risks could continue to generate volatility episodes and weigh on industries and companies in the crosshairs. This is a headwind for global growth.

What if simmering Iran tensions boil over?

The difficulty of budgeting for geopolitical risks is that they are often unquantifiable and include multiple, complex scenarios that can be outside of the market’s ability to recognize or grasp. If we view events through a historical lens, the market has generally reacted calmly except for select situations. In 17 acts of war that we measured since WWII, the S&P 500 fell 6.3%, on average, surrounding the event. In nine high-profile terrorist attacks it fell 2.6% on average. But if we segment out the market’s five worst reactions from the combined 26 episodes, the S&P 500 fell by an average of 14.3%, with a 16.1% decline being the most extreme reaction surrounding the Yom Kippur War and related Arab oil embargo in 1973.

While we think the market would view any serious conflict between the U.S. and Iran as quite problematic, perhaps it has refrained from reacting so far because it is in both countries’ interests to avoid this scenario.

Even though political headlines abound, we think it’s too early to start factoring the presidential race into equity portfolio positioning. We’re still months away from the Iowa Democratic caucuses in February 2020, which will mark the unofficial campaign kickoff.

In our view, economic momentum—specifically, whether the economy is expanding or contracting—is the main driver of corporate earnings and stock prices. There have been expansions and contractions and bull and bear markets regardless of which party wielded power in Washington. Given that emotions are likely to run high this presidential election cycle, it’s prudent for investors to focus on the economy.

Until recession risks escalate, we believe the U.S. equity market deserves the benefit of the doubt and recommend holding a Market Weight position in portfolios. While we think it’s too soon to become overtly defensive by cutting exposure below that level, we would upgrade the quality of holdings.