Women today have obtained more education, elevated careers, higher wages and greater personal wealth than their mothers and grandmothers before them.

The heroic women who fought for the right to vote had their eyes on more than just political participation when the 19th Amendment to the U.S. Constitution was ratified 100 years ago. They wanted more economic opportunity and freedom.

Today, as the United States marks the centennial of that historic event, there are indeed many economic gains worth celebrating. Women today have obtained more education, elevated careers, higher wages and greater personal wealth than their mothers and grandmothers before them.

Women also contribute US$7.6 trillion to the U.S. GDP annually and lead the way as entrepreneurs, owning more than 9.9 million businesses in the U.S. with 8.4 million employees.

The advancement of women in the workforce – and in their own homes – directly translates into influence and prosperity, fueling the nation's economy.

“Women have made tremendous economic contributions since suffrage, which I think gets overlooked," says Angie O'Leary, head of Wealth Planning at RBC Wealth Management–U.S. “You can argue that women joining the workforce is the single biggest growth driver of the U.S. economy in the last hundred years."

Still, many of the positive outcomes envisioned by female suffragists have yet to reach fruition.

In fact, to use the words of Alice Paul, a leader of the 20th century women's suffrage movement: “It is incredible to me that any woman should consider the fight for full equality won. It has just begun." 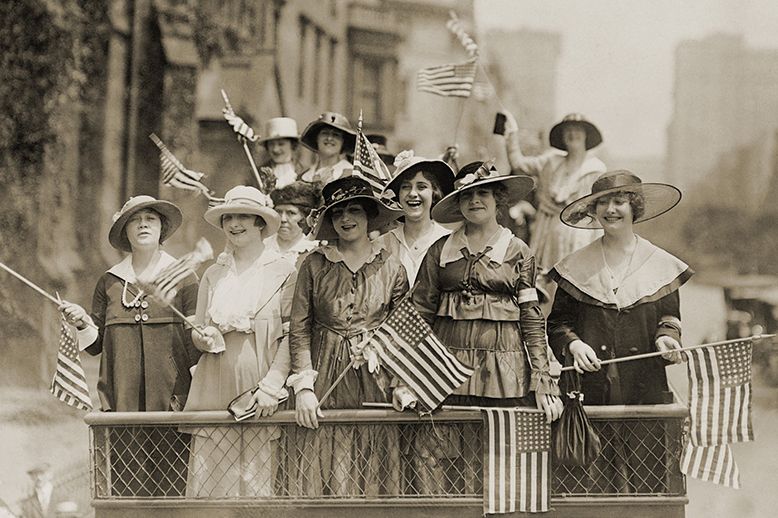 Young women wave flags from the top of an open vehicle in a New York City parade, circa 1910-1915.

It started at the Women's Rights Convention in 1848

The right to vote was fairly controversial, even among some women's rights activists, when Elizabeth Cady Stanton first presented it at the July 1848 Women's Rights Convention. “People thought it was too radical and they'd be made fun of, which they were," says University of Notre Dame professor of political science Christina Wolbrecht, co-author of the new book A Century of Votes for Women: American Elections Since Suffrage, and director of the Rooney Center for the Study of American Democracy.

The 19th Amendment recognized women as independent members of society, instead of dependent on their fathers or husbands, she says. And that represented a major shift in mindset.

“The women's suffrage movement came out of a broader reform movement. It included abolition, but it also included people who wanted to reform laws about women and women's rights during this period," Wolbrecht says. She points to statutes that kept married women from inheriting or owning property as one example. Women were also entering the workforce in record numbers and wanted more employment opportunities outside the home and the ability to control the money they made.

But the push for suffrage did not always live up to its ideals. Even though Black women fought alongside white women for the right to vote, they didn't benefit in the same way, Wolbrecht says. Despite the passage of the 19th Amendment, practices such as poll taxes and literacy tests that prevented Black men from voting also blocked the vast majority of Black women from voting until the middle of the 20th century. “African American women were dramatically underrepresented in the electorate until 1965," she says.

Today, more than 50 years after the passage of the Voting Rights Act, Black women turn out to vote at rates that are higher than Black men, according to Wolbrecht's research.

The economic force of women today

A century after solidifying the right to vote, women contribute $7.6 trillion in economic activity annually. But the drive for economic empowerment was only part of the push for suffrage. Those who fought for the 19th Amendment believed “everything else comes from the vote," Wolbrecht says. “If you have political power, then economic power, equal rights—all those things become more possible."

“That was rarely the case before," she says. “We just always made whatever was available work. Because more women are at the table, they're in more roles that influence how things are created and designed, and the types of products and services we need. That makes it better for everyone."

Another way women wield economic power is through their spending and investing decisions, says Senne. “You look for companies you believe in and you don't buy from them if they engage in bad labor practices," she says. “There are so many other options out there."

More work, more potential for women in the next 100 years

Women continue to face a lack of parity in wages, a gap that's even larger for women of color. But O'Leary says she sees the potential for women to experience the same growth in economic power as they have in the political process. To get there, she suggests women seize opportunities to talk more openly about money with the next generation.

In that vein, Senne sees the effects of women's growing influence on younger generations reflected in the goals and dreams of her 17-year-old daughter. “I just look at the attitude she has, and I think back to the attitude I had (at that age). I was head down, just trying to get a college degree and get a job," Senne says. “She's saying, 'I think I can do whatever I want.' She doesn't have that same lens of being held back. And I hope that's the case for more young women, because they see so many other women have been able to pave that path."

Health and wealth: Why investing in your wellness now will help you in the future

With direct links between financial fitness and physical health, it pays to take a preventative approach to both.