With the MSCI World Index reaching new all-time highs in the last three months, one can be forgiven for concluding that recent trade agreements will usher in a much improved environment over their predecessors. In fact, global trade volumes are unlikely to revert to their previous heights and the deals could even hinder economic growth. 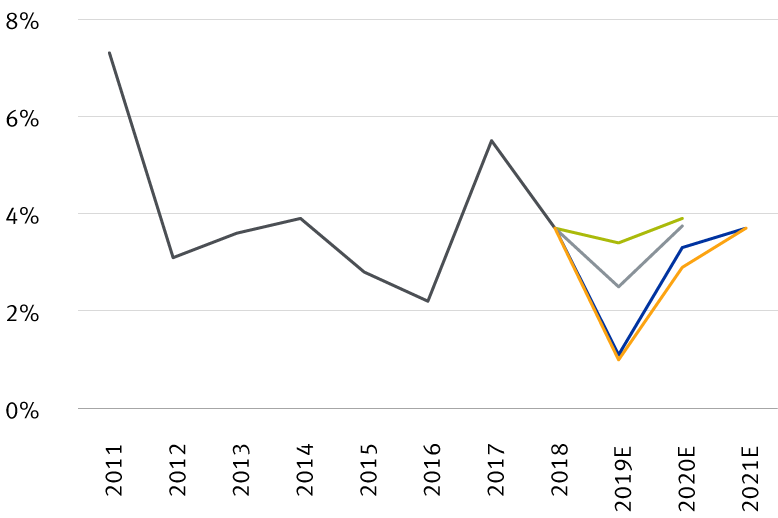 But markets have been relieved that the risk of a full-blown trade war has receded, and they have been driven by the hope that the lifting of trade uncertainty will help generate modest, if not significant growth. We look at the real economic impact four trade situations may have, and the implications for equities.

The recently signed Phase 1 trade agreement seems to bring a truce in the trade war which rattled financial markets over the past 18 months. It is undoubtedly good news, with China pledging to purchase an extra $200 billion of American goods, including agricultural products and services, over the next two years relative to 2017 levels. China also promised to change its intellectual property rules and not to manipulate its currency. In return, the U.S. will halve existing tariffs to 7.5 percent on $120 billion of Chinese imports and refrain from applying further levies.

But look closer and you can see that the benefits of the deal are limited. Duties of 25 percent on another $250 billion of Chinese goods remain in place. In fact, RBC Global Asset Management Inc.’s Chief Economist Eric Lascelles points out that the average U.S. tariff will decline only marginally from a high of 4.5 percent, much higher than the average of 1.5 percent that prevailed before the start of the trade spat.

Moreover, it is not clear how China will reach its aggressive purchase target, which requires it to buy roughly 50 percent more than it did in 2017. Failure to comply could lead to U.S. disgruntlement, and a renewed risk of escalating tensions cannot be ruled out.

Finally, Phase 2 negotiations, which may well be pushed back until after the U.S. presidential election in November 2020, may prove much trickier given China is unlikely to bend to U.S. demands to significantly reduce its support of state-owned enterprises.

Overall, while the worst-case scenario, a full-blown trade war with the imposition of new tariffs, has been avoided, the moderate tariffs in place are likely to crimp growth over the course of a few years by up to 0.65 percent in the U.S. and up to 0.8 percent in China, according to Lascelles, both of which are non-negligible impacts.

USMCA: Sand in the gears

Despite three years in the making, the USMCA (United States-Mexico-Canada Agreement), to be signed imminently by U.S. President Donald Trump, is not substantially different than its precursor, NAFTA, one of the most successful trading arrangements in the world. But Lascelles points out that the USMCA is nevertheless less supportive of economic growth relative to NAFTA, mostly “because future growth of the auto supply chains is being hobbled.”

Main features of the USMCA

USMCA will have neutral to modestly negative economic effects

With the U.S.-China Phase 1 pact in the books, there are concerns that the mercurial Trump will train his sights on the Continent. U.S.-EU trade tensions have been simmering for some time. The Trump administration would like to access the well-protected European agricultural market to redress the large trade imbalance with Europe caused by imports to the U.S. of luxury goods, including wine and cheese.

Tensions seem to have abated recently as Trump and French President Emmanuel Macron declared a truce on the contentious digital services tax dispute, which threatened to mushroom into a transatlantic trade war. Macron has agreed to postpone until the end of 2020 a three percent tax that France imposed last year on the revenues of large tech companies, including Google, Apple, Facebook, and Amazon, that do business in Europe but escape the taxman’s grip by shifting earnings to lower-tax jurisdictions.

Despite this detente, Europe may want to take heed of Trump’s previous tactics of applying tariffs during negotiations with China, Canada, and Mexico to extract further concessions.

A worsening of trade conditions would be difficult for Europe at a time when its economy is not robust, particularly as it may suffer from China diverting some of its purchases from other trading partners to the U.S. in order to meet its commitments per the Phase 1 deal.

Reelected on a slogan of “Get Brexit Done,” UK Prime Minister Boris Johnson has his work cut out for him. Getting the UK to leave the EU on January 31 may have been fraught with difficulty, but that pales in comparison to the task of negotiating the future relationship with the bloc within the self-imposed deadline of December 31, 2020.

We expect only a bare-bones free trade agreement is feasible given this constraint. Moreover, we would not dismiss the possibility that the UK will have to trade on World Trade Organisation terms if the agreement is not achieved on time and the government refuses to ask for an extension to complete the negotiations. As this plays out, businesses will face lingering uncertainty that will likely constrain growth.

Trade: Good, but not as good

All these ongoing trade spats will likely conspire to put a lid on trade growth. The IMF’s recently revised growth outlook for world trade volumes in 2020 looks for a rebound from 2019, but not back to the level of recent years as remaining duties will continue to drag on growth. The fall in the U.S. 10-year Treasury bond yield, a proxy for future economic growth expectations, to 1.74 percent seems to corroborate that no strong global recovery is expected in the wake of the recent positive trade outcomes.

Equities have been buoyed by central banks easing monetary policy, the search for yield, and hopes of global growth picking up as trade disputes wane. Disappointing economic growth or renewed tensions between the U.S. and its main trading partners would test investors’ nerves and could spark volatility. So long as economic activity is sufficient for companies to eke out some earnings growth, as we expect will be the case, we think investors should maintain a Market Weight (benchmark) position in equities, though with heightened vigilance.