We examine the plunge in crude oil prices and provide updates on the economic outlook for the U.S., Canada, and other major economies.

Equity markets have made up much of their lost ground since their March lows as COVID-19 infection and mortality rates have improved in North America and Europe, and as rays of light have started shining into the quarantine tunnel. Markets are anticipating major economies will reopen on a rolling basis sooner rather than later. The Federal Reserve’s unprecedented $2.3 trillion intervention into the U.S. credit market has also boosted equities, as it staved off what could have been a painful credit crunch.

But there are still some caution signals flashing. We examine the historic plunge in North America’s crude oil benchmark, which has weakened equity markets around the world in recent trading sessions. We also provide updated thoughts on the economic outlook for the U.S., Canada, and other major economies, along with what we see in store for global growth.

Global economic crises—the COVID-19 pandemic certainly qualifies—often bring with them eye-popping and head-scratching knock-on effects. The collapse of North America’s crude oil benchmark is one for the ages.

How do you spell relief?

Crude oil demand destruction is just one indication that major economies are facing serious challenges from COVID-19. There is much debate among market participants about whether the pandemic-driven economic recession and recovery will be shaped like a “V,” a “U,” a “W,” or some other letter. Rather than fixate on letters, we are mindful that there are still a lot of uncertainties about the duration of the downturn and the trajectory of the recovery. 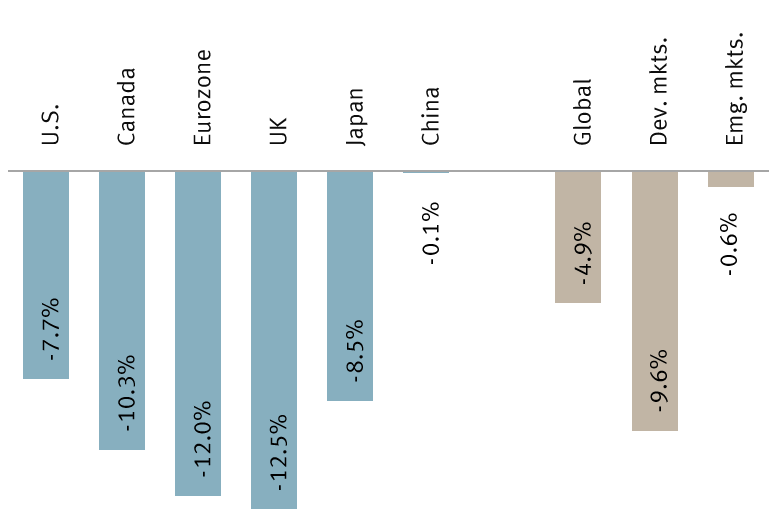 We think the combination of lingering economic uncertainties and historic instability in the crude oil market argues for keeping some powder dry. We continue to recommend holding equities at the Underweight level in portfolios for the time being—this is below the long-term strategic recommended level.

While it appears that market participants are bracing for harsh recessions in many large economies, it’s still unclear to us whether they are accurately estimating the magnitude and duration of the downturns. Perhaps even more importantly, it is not yet clear whether they are gauging the recovery trajectory properly. There are still many COVID-19-related challenges that could come into play as economies reopen.